129 active cases of Covid-19 in Saskatchewan, 12 in hospital 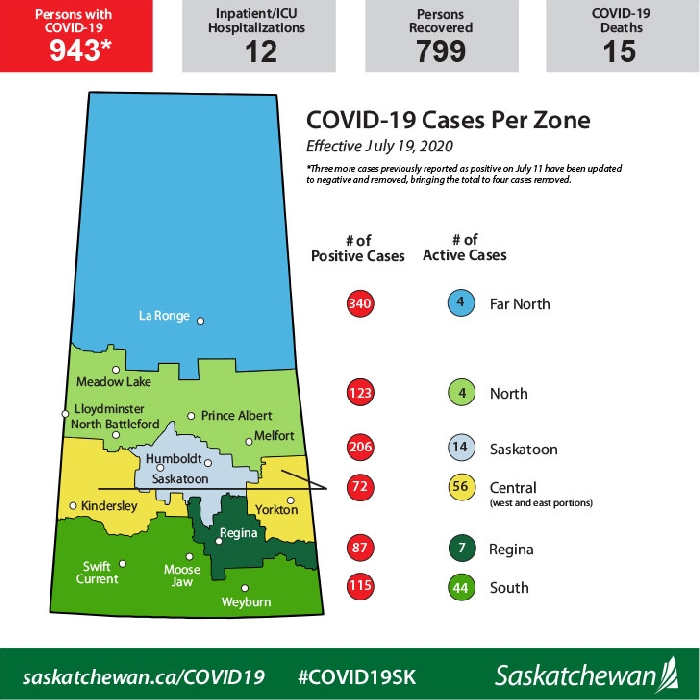 There were six new cases of Covid-19 reported on Saturday, July 18, and five new cases reported on Sunday, July 19 in Saskatchewan. This brings the provincial total to 943 cases. The new cases are located in the North (1), Central (5), South (3) and Saskatoon (2) regions.

Three more cases reported on July 11 as positive have been updated to a negative result and have been removed from the total cases, bringing the total to four cases removed.

Of the 943 reported cases, 129 are considered active. A total of 799 people have recovered.

 516 are community contacts (including mass gatherings);

 79 are under investigation by local public health.

 58 cases are health care workers; however, the source of the infections may not be related to health care in all instances.

 131 cases involve people 19 years of age and under, while the remainder are adults.

 15 deaths related to COVID-19 have been reported to date.

There have been 2634 COVID-19 tests performed in Saskatchewan over the past two days: 1339 on Saturday; and 1295 on Sunday. This represents the two highest daily testing totals to date.

Since mid-June, there has been an increase in cases in the southwest and west-central parts of Saskatchewan, both on colonies and in the broader community. Public health investigation is ongoing to determine transmission chains and to identify contacts. While most of the recent new cases have been in southwest and west-central Saskatchewan, the risk of COVID-19 transmission continues to exist in every part of the province. This is why everyone must continue to take precautions and follow public health measures.

COVID-19 testing is now available to anyone who requests it, regardless of whether they have symptoms or not. A referral for testing can be made by contacting HealthLine 811.

General public inquiries may be directed to COVID19@health.gov.sk.ca.

Find the most up-to-date version of the Re-Open Saskatchewan plan at www.saskatchewan.ca/re-open.

On October 25, 2020, at approximately 1:50 am, Portage la Prairie RCMP received a report of a suspicious vehicle parked outside a residence on Tupp...