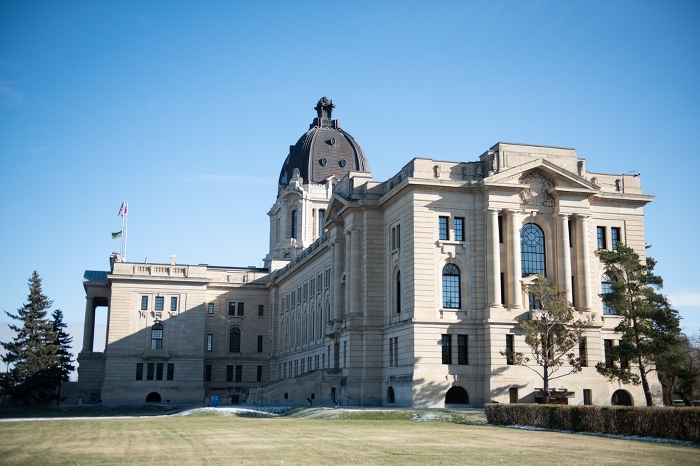 The Saskatchewan Legislature, as seen on election day, awaits its new members.

Late into the night it looked like not much at all had changed, with similar the seat counts and leaders of both of the major parties retaining their seats. But that changed late into the night, after the TV stations shut down their coverage. The Saskatchewan Party kept picking up additional seats, and an upset came in for New Democratic Party (NDP) Leader Ryan Meili. With 50 of 50 polls reporting in in Saskatoon Meewasin, he was behind the Saskatchewan Partys Rylund Hunter by 83 votes.

Even then, the final result may not be known until the final election count, Nov. 7, 12 days after the election. Thats because votes received in the mail from Oct. 27 to Nov. 5 wont be counted until the final count. Additionally, some voters may have chosen to vote in person instead of by mail, or have chosen not to vote at all, so how many of those vote by mail ballots issued are actually in play is an open question.

Usually not an important factor, the COVID-19 pandemic led to an extraordinary increase in both requests for mail-in ballots and participation in advanced polls. Advance voting was up substantially compared to 2016, with 185,061 votes cast this year compared to 110,716 cast four years ago.

Meilis seat wasnt the only race which could be impacted by the extraordinarily high number of mail-in ballots. Saskatoon University had the NDPs Jennifer Bowes leading the Sask. Partys Eric Olausen by 105 votes, with 1,296 vote by mail ballots issued. Saskatoon Eastview saw NDP candidate Matt Love ahead of Sask. Party candidate Chris Guérette by 102. That riding had 1,555 vote by mail ballots issued.

An upset came in Saskatoon Riversdale, where the Sask. Partys Marv Friesen beat the NDPs Ashlee Hicks by 274 votes. Saskatoon Riversdale has long been an NDP stronghold, represented by past NDP Premiers Roy Romanow and Lorne Calvert. But that riding also had 920 vote by mail ballots issued.

Awash in with Sask. Party green

The map was awash with Sask. Party green across all of rural Saskatchewan save the two northern seats of Athabasca and Cumberland. Other than the north, only the more central and western portions of both Saskatoon and Regina went NDP orange.

This is the third provincial election since the COVID-19 pandemic hit, and in each case, the incumbent government won, with a stronger showing either in seats or vote share. New Brunswicks Progressive Conservative government under Blaine Higgs was the first, moving from a minority to a majority government. A similar pattern happened just days ago in British Columbia, where a minority NDP government lead by John Horgan won a majority. In each case, the voters trusted the incumbents to continue on.

That was the central theme of Saskatchewan Party Leader Scott Moes campaign. He started the election by asking Who do you trust? and it was his mantra throughout the campaign, asking who the voters would trust to lead Saskatchewan through the recovery from the pandemic. Moe consistently brought up the NDPs record of cuts during its 16 years in power from 1991-2007 under austerity budgets to eliminate a deficit in the earlier years. He said the NDP were a party of decline, while the Sask. Party was one of growth.

Conversely, NDP Leader Ryan Meili often focused on what they said the Sask. Party would do  make severe cuts to social programs under austerity budgets. Meilis repeated phrase that such cuts, during uncertain times, were downright dangerous. Their campaign focused on People first, and included a Sask. First procurement strategy, smaller class sizes in schools, and a restoration of STC bus service.