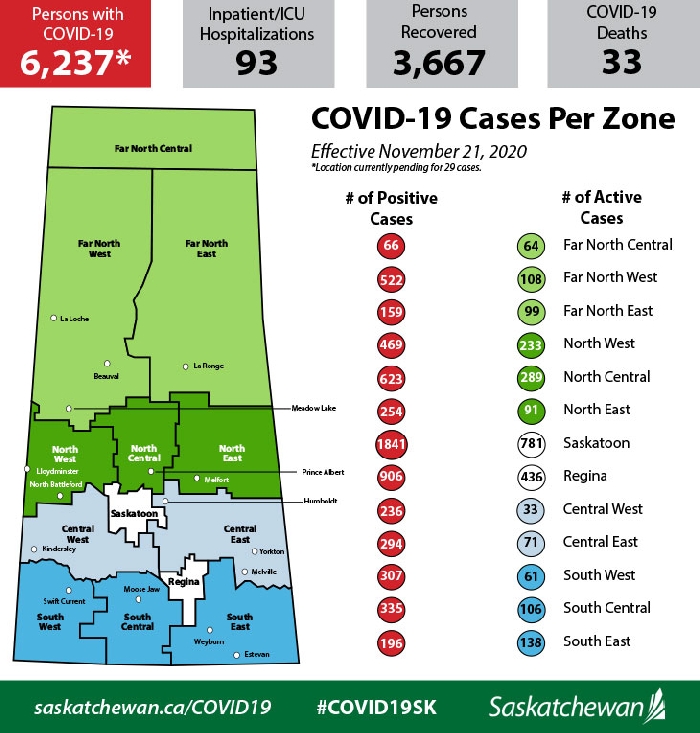 There are nine active cases in South East 2, including the Moosomin, Rocanville, Whitewood and Kipling areas.

There are 18 active cases in Central East 5, including the Esterhazy and Melville areas

There are 16 active cases in South East 4, including the Redvers, Carlyle, and Estevan areas.

Saskatchewan Health Authority says fluctuation in daily case numbers can be expected, as a result of factors including weather-related and logistical delays in lab specimens reaching the Roy Romanow Provincial Laboratory.

The seven-day average of daily cases is 203 (16.7 new cases per 100,000 population), information which will be now be regularly reported.

Ninety-three people are in hospital. Seventy-two people are receiving inpatient care; eight in the North West, seven in North Central, one in the North East, 32 in Saskatoon, one in Central East, five in Regina, one in South Central and 17 in the South East zone.

Twenty-one people are in intensive care: three in North Central, eleven in Saskatoon, one in Central East, one in South West and five in Regina.

Of the 6,237 cases in the province:
434 cases are travelers;
2,731 are community contacts (including mass gatherings);
1,283 have no known exposures; and
1,789 are under investigation by local public health.