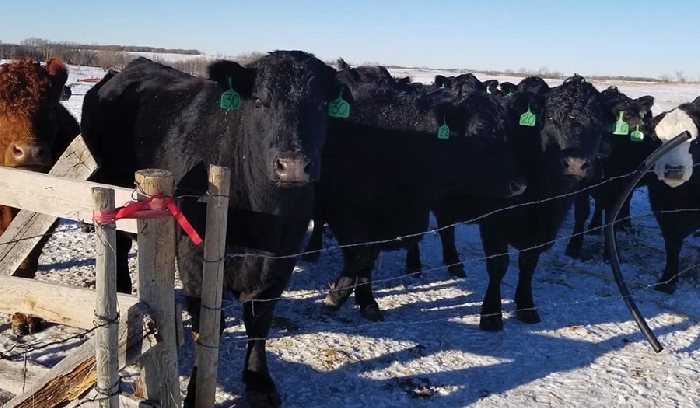 Moosomin area cattle farmer Trevor Green has taken an unorthodox approach to raising his cattle. Rather than rely on the usual feed like hay or silage hes been corn grazing with his cattle.

We basically got into corn grazing to eliminate using machinery and fuel every day, said Green. Machinery and fuel are two of the biggest expenses on a cattle farm and cattle have got feet and teeth and they can go find their own feed.

With corn grazing, you basically sow it in the spring and then it grows all year long and once it drys down you turn the cattle to itwere grazing about 78 cattle in there and theyre getting about 0.6 of an acre for about a three or four day stretch.

On the fourth day we feed them a little bit of hay, they have hay in the morning and that afternoon I let them into the new paddock again.

It cuts down on having to start a tractor every day and using fuel, the cattle are in great shape and it takes a little bit more mineral and stuffwe use a good mineral program through Moosomin. Theres no cleaning cost, the cattle are pooping and peeing out in the field that I need the nutrients in to grow corn for next year again. The cattle go to the feed instead of us going to bring the feed to the cattle all of the time.

Three major factors that have led Green towards corn grazing are its efficiency, the amount it saves on costs, and that less land is needed to raise more cattle on corn. It was a transition hed looked into before moving forward with it, but hes happy he did.

It gives the ability to grow a lot of tonnes on a small amount of acres, he said. As land gets more and more expensive, we have to look at whether we should buy more land or utilize what we have better by growing more tonnes by acre. Its a 12-acre field and were feeding 78 cows for roughly 100 days and if I was growing hay on that then I might have 30 days worth of feed on that 12 acres.

One thing that has really stood out to Green with corn grazing is the drastic difference in fuel use. With corn grazing, tractor use is far less frequent and hes using hundreds of litres less of diesel fuel than average this winter.

Some guys use straw, some use silage, or hay bales, he said. Unless youre bail grazingwhich were probably going to start doing here in a weekyoure starting a tractor every day and taking that feed out to the cows. If youre feeding silage, youre generally starting two tractorsyouve got a mixer wagon and a loader tractorand its a lot of fuel.

So far this winter Ive used about roughly 60 litres of diesel fuel, guy could be upwards of 300 or 400 litres on 78 to 100 cows. With that tractor running every day feeding bales and then youve got cleaning costs come spring and summer, it adds up.

After looking into corn grazing for some time, Green decided it was something he would like to try out. An unintended positive impact to come out of moving to corn grazing was easily being able to involve his family in helping out when he needs a hand.

I took a little bit of it when I went to college, the Western Beef Development Centre is a huge resource for trying different stuff, he said. Theyve been doing it up there and a couple years ago we thought we should just try it and see it how it works. Its nice because if Im not available or Im helping a neighbour or something, my wife Cindy can come home from work and her and the kids with the quad can go move the fence. Some people can be intimidated by a tractor and she can fire up the quad and grab the kids and they can go help. They can move the fence in like 20 minutes and the cattle are good for another three days. Its good for the whole family, the kids get to be involved!

My son is six years old and he can go help move the fence, well what can you do if youre choring with the tractor? He can ride in the cab and do nothing. So it kind of gets the whole family involved and I like it that way, getting everybody to contribute a bit. Even in the deep snow, the leaves and the cobs are so high on the corntheres places out there right now where the snow is over two feet and the cows can just plow right through it and go find the cobs and the leaves. It doesnt seem to bother them and its cattles natural instinct to go out and graze. If they can graze on the cornIm a Union Forage rep now so were going to put some swath grazing inthen next year our idea is we can graze the cattle for 10 or 11 months of the year and there will only be a month where we actually take bail to them.

Green plans on corn grazing again next year too while exploring swath grazing which will help extend the grazing period and continue to reduce the cost and time for harvesting forage and cut down on machinery use for handling feed and manure.

The swath grazing will have a bunch of different varieties in it (Goliath forage rape, Hunter leaf turnip, green globe turnip, millet, forage peas), he said. Then with the corn theyll go graze it and our cows this year will be done in a few days, but next year hopefully well go right into the middle of February with corn grazing. Its just a different way of doing things and the margins are pretty tight on a cattle farm and everything we can do to save money is money in the bank.