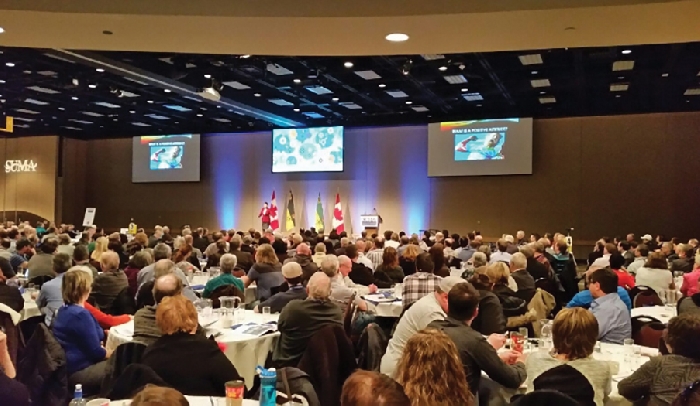 Normally the Municipalities of Saskatchewan convention and tradeshow is in a convention centre full of people, this year the event pivoted to an online format.

Every year the Municipalities of Saskatchewan (formerly the Saskatchewan Urban Municipalities Association or SUMA) holds a convention either in Regina or Saskatoon where municipal governments around the province meet to listen to keynote speakers, sit in on sessions touching on various topics, attend a tradeshow, and vote on resolutions.

From February 7-10, the Municipalities of Saskatchewan hosted their virtual convention with it beginning Sunday afternoon and ending midway through Wednesday.

Although the social aspect of the event was removed because it was online, many of the municipal governments found the virtual convention went smoothly and still provided a lot of insight.

Moosomin
The virtual convention and tradeshow wasnt ideal according to Moosomin Mayor Larry Tomlinson, but hes glad the event went on in some capacity rather than having it cancelled.

It was alright, I watched quite a bit of it, Tomlinson said. It was certainly differentits not like being there, thats for sure. I did touch base with some of the suppliers there through how it was set up online, but its not the same as being there and talking to them. Nothing really stood out.

I took part in a couple of seminarsone that I was in, that I really wanted to listen to, cutout on me part way through. They had some technical issues for awhile, especially during the start. It was better than having nothing though.

Esterhazy
Other than a few technical hiccups, Esterhazy Mayor Grant Forster thought the virtual convention was a great alternative option and found it to be quite informative.

It was interesting, said Forster. I thought they did a very good job of trying to replicate the convention experience. The education sessions, the keynote speakers, and all those sorts of things are always something that I look forward to and they did a good job of still being able to have that for us.

To make it virtual obviously isnt the same, but I think personally I was able to absorb more by sitting in my living room and watching it on my laptop without having all the distractions of a thousand people around me. From that standpoint, I think I learned a lot more.

Things like the tradsheow were difficult. You had to know specifically why you were going to stop in at a particular booth, in my case I felt that way. When youre there and wandering around the tradeshow and something catches your eye and you think its interesting, we didnt have that opportunity this year. The resolutions were conducted well, they had a little bit of technical difficulties with the voting, but they got through that and once they figured it out I thought everything went fairly well.

The experience wasnt there, but I think the knowledge one would gain through the in-person sessions was still there in the virtual.

The knowledge is the important part, the experience and networking is great, but I go for the knowledge and I think thats the way our whole council looks at it. We all go for the learning experience opposed to the social aspect of it.

Every year at the convention the municipalities vote on different resolutions, Forster said this year the only one of note was regarding a potential change to the structure of municipal elections.

There was only four (resolutions), he said. There was nothing that was really controversial. The one that took the most amount of time and debate was for implementing an election every two years for councils where half the council would be up for re-election every two years. There was a lot of discussion around that, but ultimately the resolution was defeated pretty handidly. There wasnt a whole lot of support of it outside of the big cities, but I think it was of the greatest interest to most people.

Kipling
Pat Jackson, mayor of Kipling, says the in-person experience is usually a great way for councils to build relationships and they missed that this year with the virtual event, but she said shes glad her new councillors still had the opportunity to participate in some of the learning sessions at the convention.

I would be a liar if I said it was my favourite conventionit was my 17th, Jackson said. I think given the circumstances it was certainly far better than what some people thought we should do, which is have no convention. It was particularly important this year given it was following an election because there are so many new councillors. In some cases there are completely new councilsmayor and all the councillorsand in those cases, their learning curve is just about vertical. Having an opportunity for them to attend, even virtually, it gives them a chance to do a lot of learning.

The convention had many good education sessionssome on very specific topics and some are much more broad. One that was really well received by my new councillors was a, things Id wished Id have known before I ran for council type of topicit was sort of a government 101 session and it laid out very clearly what the rules and responsibilities are. They still had a tradeshow, I did manage to spend a bit of time at a couple of the places and went into their chatrooms to talk to them about their products.

It still gave us a chance to connect but it wasnt the same. Im of a very different generation than five of my councillors and normally I would have been looking forward to that connection time at the convention because we spend a lot of our time together so we want to make sure we have that connection and understanding of where each of us comes from. So the connections are something to look forward to next year.

A great horned owl was released Thursday in her home territory between Rocanville and Moosomin. The owl, affectionately called Beauty by the people...

Public health officials advise that three additional deaths in people with COVID-19 are being reported today:  a male in his 20s from the Northern h...

Vaccines Reported An additional 6,738 doses of COVID-19 vaccine have been given in Saskatchewan, bringing the total number of vaccines adminis...