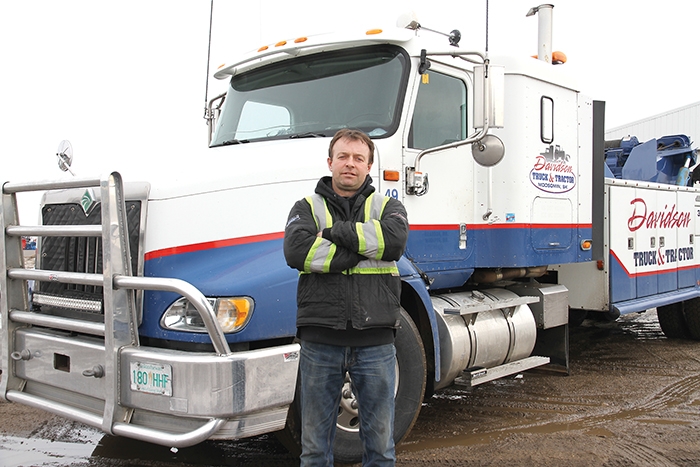 The Chamber supported Todd Davidson in his idea to put Moosomin on Daylight Savings Time.

At the Moosomin Chamber of Commerce meeting Wednesday, Todd Davidson, the owner of Davidson Truck and Tractor, spoke about his proposal to look into moving Moosomin onto Daylight Savings Time.

Davidson says he was inspired to get serious about the idea at one of his kids ball games. He says his son was benched after two strikes and he was told by the umpire it was because they needed to speed up the games before they run into darkness.

I wondered why are we doing this? Why cant we have four balls and three strikes, says Davidson.
Davidson said instead of wasting daylight at 4 am, if Moosomin were to go on daylight savings time there would be more time in the evening for things like recreation.

Its a big part of everyones livesthe golf course, ball. Youd have more time to do it. Usually when the sun sets thats when that stuff quits and you call it a day. We arent getting up at 4 in the morning to play ball. If we started and ended our work day a little earlier wed have more time to spend in the evening. We have great rec facilities here and theyd be used a lot more. There is money to be generated with this as well.
Were so close to Manitoba, and they do it. There is only one province and one state in North America that doesnt change their time. We are losing a lot of time and revenue.

I grew up in Manitoba and worked my whole life in this town and its always been a struggle with the time. If you work here and travel back to Manitoba you are losing two hours every day. We have lots of customers who come from that side of Manitoba, and they dont come here (in the summer).

There are a lot of individuals in this room that run businesses and have ideas we could put forth. I dont know what the best way to do this it is, but if we could get the doctors and school division to do it, I think a lot of good would come from it.

Chamber member Bill Thorn pointed out that Creighton and Lloydminster are on Manitoba time and Kindersley is on Alberta time.

Moosomin MLA Steven Bonk was at the chamber meeting. He was asked his opinion about Daylight Savings Time.

I know that provincially there is not a huge appetite for it, he said. They arent overly excited to bring that up. Its not at the top of the list of things they are looking at.

Chamber member Angie Turpie said shed worry about people driving from other towns, like Rocanville, for services in Moosomin.

Davidson said hes talked to business owners in the surrounding towns and found they are just as frustrated by the time change, and find customers from the Manitoba side of the border trying to do business with them when they arent open.

Working for Mazergroup, as a Manitoba-based company, we get that all the time, people calling here and the store isnt open, said Mike Sidoryk.

Kari Kosier, with Karis Kloset, added that she finds the time change inconvenient when dealing with her suppliers out east.

Bill Thorn suggested a motion be made to support the idea of looking into the option of moving Moosomin and area onto Daylight Savings Time, and the motion was carried.

Rodeo weekend discussed
Mike Sidoryk, the president of the Moosomin Rodeo Committee, spoke to Chamber members about plans for this years rodeo on July 5-6.

We have another good year coming. There are some new sponsors and new people involved, said Sidoryk.

Sidoryk said the rodeo performances on Friday and Saturday will be a half an hour later this year, at 7 pm instead of 6:30 pm.

There are three other rodeos that weekend and we have a facility with good lighting, he said.
He said there would be entertainment in the beer gardens both nights, and a cabaret on the Saturday night.

On Saturday morning the weekend will start with a pancake breakfast at the Moosomin fire hall, followed by the Chamber parade at 10 am. There will be a kids rodeo at noon, something Sidoryk says has been popular.

Its kind of nice to see the future of the sport, he said. He said sponsors provide prizes to the kids.
Moosomin Rodeo Idol will be at 3 pm that day in the beer gardens.

Volunteers are always welcome on the weekend. We are always looking for people to help in the arena, the beer gardens, taking tickets, and of course on the committee if anyone you know wants to be on the committee. We have a fantastic group of people and are fun to be around.

Chamber secretary Kevin Weedmark followed Sidoryks presentation with a few details about some of the other events being planned that weekend.

He said the honorary parade marshals this year will be the Santos familya family that was nearly deported to Honduras but was allowed to stay in Moosomin after the community rallied around them. The family was suggested by a few Chamber members when a call for nominations was put out.

He also added that there would be a few Shrine bands in the parade this yearthe Regina Drum Corps, the Moose Jaw Oriental Band, and possibly the Shrine steel drum band from Indian Head.

He said the annual ping pong ball drop would follow the parade in the Moosomin Family Practice Centre parking lot, and after that would be the annual Multicultural Celebration at the Legion Hall.

He also added that the town of Moosomin would be kicking off rodeo weekend with a barbecue lunch at noon on Thursday at the Sportsplex. Proceeds from this years barbecue will go toward the Pipestone Kin-Ability wheelchair swing.

SE College talks about safety courses
Jacquie Becker and Renata Gaca-Proszak with Southeast College gave a presentation on the courses being offered at the college. Becker spoke about the first-year university courses being offered, and about some of the programs that have been running long-term at the college, such as the continuing care assistant course in Whitewood and the electrician course in Moosomin. She said the are also excited to offer a primary care paramedic course in Redvers this year. She said a new management training course is also in the works, and more details will be announced on that.

Renata Gaca-Proszak talked specifically about the safety courses offered at the college, such as confined space, fall prevention, first aid and CPR, ground disturbance and H2S, just to name a few, and reminded Chamber members that the course could be used for the oil and gas industry, as well as other industries in the area that require safety training.