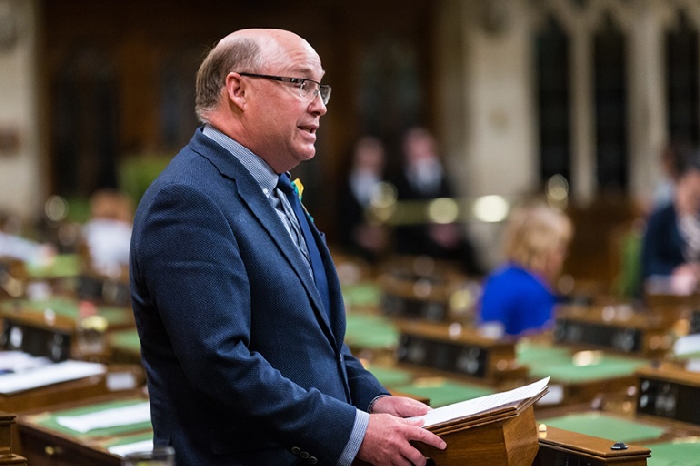 Souris-Moose Mountain MP Dr. Robert Kitchen says he expects the April 1 increase in the carbon tax will have a big impact on agricultural producers in Saskatchewan.

Kitchen explains that producers are paying additional costs out of pocket due to the tax.

It has a huge impact on farmers. And the part that a lot of people dont understand is that while the message from the government is that they get that money back, they dont, because the reality is that yes, when they use gas on their farm that carbon tax is rebated. However, when they go to move their grain, the moment they hire somebody to do that the carbon tax is charged and they dont get that money back. That builds up.

If youve got your own 18-wheeler and youre moving your own grain and youre using your own gas, thats fine. But a lot of times farmers dont have the ability to do that so thats a huge impact on the farming industry. The fact that as of April 1st its going up $10 to $40 and then next year will go up another $10, then the year after that will be another $15 year each year until it hits $170 a tonne, thats going to have a huge impact on their overhead costs. It's not just getting their crop to market, for fertilizer thats being brought in, theyre being charged carbon tax when it is being brought in and thats coming out of their pocket.

The increase is going to have a tremendous impact on the riding, especially for our agriculture industry. The Fraser Institute came out with a recent study that indicates that it will cost Canadians 220,000 jobs. Thats a significant amount, its going to cost billions of dollars to those industries.

The use of Carbon Capture and Storage (CCS) as an alternative to the carbon tax is something that Kitchen says he is trying to promote.

"We have to recognize that steps have to be done by businesses and industry to try and find ways to reduce emissions, and there are things that can be done along those lines to reduce emissions. But we need to make investments to do so. A prime example is carbon capture and storage that we spearheaded here in Saskatchewan, right here in this riding, and that technology is now all over the world. The environmental committees over in Europe and all over the world have said that they need CCS technology as we move forward.

We also need to recognize the great stewardship and the stellar work that our agriculture industry is doing and theyre not getting credit. They dont get any credit for building the carbon and sequestering the carbon in the soil. Theres new technology thats being brought from the coal industry that theyre using that actually will assist farmers to sequester carbon in the soil, and there needs to be credit for that. This technology and this knowledge to do that is there,

He says he believes the idea of credit for the sequestration of carbon has some merit, but it is still being researched. Currently the federal government is seeking imput from producers on how a carbon sequestration credit could work.

There are steps that have to be done with where theyre at with the technology, and there are scientists at the University of Saskatchewan and University of Regina that are actually in the agriculture industry that are showing examples of what percentage of carbon theyre capturing. Those have to be looked at to find out and make sure we can give appropriate support and recognition of that.

A private members bill was introduced recently that would create some exemptions for the agriculture industry. The bill gained the support of the Bloc Québecois, the NDP and the Greens, enough support to pass second reading in the House of Commons. The bill is now in committee.

At the agriculture committee, there will be questions and witnesses called. There might be amendments to it but hopefully once it comes out of committee it will be reported back to the House and it will go forward to a third reading and continue to be pushed forward. I think its a great bill with great support and I think it will be great for our farmers.

For producers and workers who are impacted by the carbon tax, Kitchen encourages them to reach out and communicate with not only himself but send their concerns to the federal government as well.

A lot of them are calling me or emailing me or other MPs. Ultimately at this point in time, I would say to be sending those same things to not only me but also to the Prime Minister and the agriculture ministers so that theyre very well aware of it.

He said it is difficult to communicate the impact of the carbon tax on the farms across the Prairies.

The challenge that weve had is the recognition of how vast Saskatchewan is, even my riding and the size of it. The perception in parts of the country is not that way. They look at their farms that are much smaller than ours and do not understand the impacts that it has on farms the size that were having to deal with. Getting the country to understand the impact its going to have on the Western agriculture industry is tremendous. The more they can get that information out and ask those questions to the Prime Minister or ag ministers the better. Likewise, if there are ways I can help then I will try to get that information across to where I can.