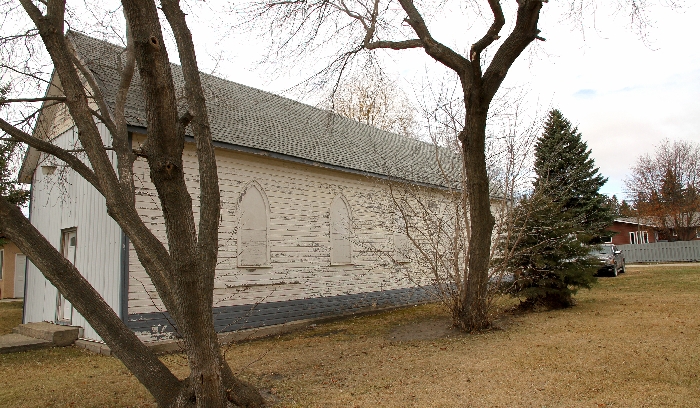 This building was designated a municipal heritage building at the request of a previous owner.

The town of Moosomin is preparing to remove heritage designation from the former Alcoholics Anonymous Hall on Birtle Street.

The owner of the building, Mark Fletcher, wrote to council asking that the designation be removed.
I would like to ask the town to remove the heritage status from the old AA Hall at 708 Birtle Street, Fletcher wrote to the town.

I find that the heritage status designation is not beneficial to myself as I cannot make any improvements to the building to serve the function I would like to use it for. The building has become difficult to insure. I have spoken with two insurers. Wawanesa has dropped the policy and Co-operators has recommended to have (the heritage) status be removed if possible.

Insurance has become an issue for many heritage buildings, as there are strict rules on how the buildings must be rebuilt if destroyed or damagedfor example using original materialsmaking them very expensive to repair or rebuild.

I do not want to change the appearance of the exterior of the building at this time, Fletcher wrote to council. If I cant have heritage status removed I would like to have some direction.

The issue was discussed at the March 24 town council meeting.

The building was given heritage status in 1990.

Councillor Greg Nosterud commented that the building was the original Catholic Church in Moosomin.
Council agreed at the March 24 town council meeting to begin the procedure to revoke the heritage designation on the building.


Moosomin town council has decided to purchase a generator for the fire hall to ensure that power is available to the fire hall during a power outage.

If power is out, the fire hall cools down very quickly when the doors are open, Councillor Greg Nosterud said.

Council agreed to purchase a standalone generator for the fire hall at an estimated cost of $10,000 to $14,000.

CP rail making use of MCC centre, ice surface
At the last Moosomin town council meeting, Rec Director Mike Schwean said that CP Rail would be making extensive use of the towns meeting facilities as a crew is based in Moosomin on a track maintenance project.

CP Rail will be in the rink a lot of the next three weeks. They have been using the MCC Centre and the ice surface for some meetings, and theyve been having some lunches in the Sportsplex, Schwean said.

Those facilities are very busy right now, between CP holding their meetings, and SHA using the rink lobby for vaccinations.

Schwean also told council the recreation department received $1,500 in Covid-19 funding from the RM of Moosomin and said the contribution is appreciated.

I am resigning from the Moosomin Housing Authority as we have sold our house and will be moving to Manitoba in the near future, Middleton wrote.

I have enjoyed my years on the board, it was a pleasure to work with all of them. Thanks for giving me that opportunity!

Moosomin has been good to us and we have enjoyed our years here.

Middleton served on the housing authority for two decades.

Also at council . . .
Also at the last Moosomin Town Council meeting . . . council decided to purchase additional H2S monitors for the town crew . . . acting foreman Mike Stein was asked to come up with a wish list for the towns public works department to be considered in the 2021 budget process . . . Dallas Campbell was hired as a full-time employee and Quinton Felsing was hired as a seasonal employee for the public works department . . . council decided against participating in Communities in Bloom for 2021 . . . and council agreed that members who attended the Municipalities of Saskatchewan virtual convention are entitled to the same per diem payments as had they attended the convention in person.