Highway 8 Moosomin to Rocanville to be repaired after spring thaw 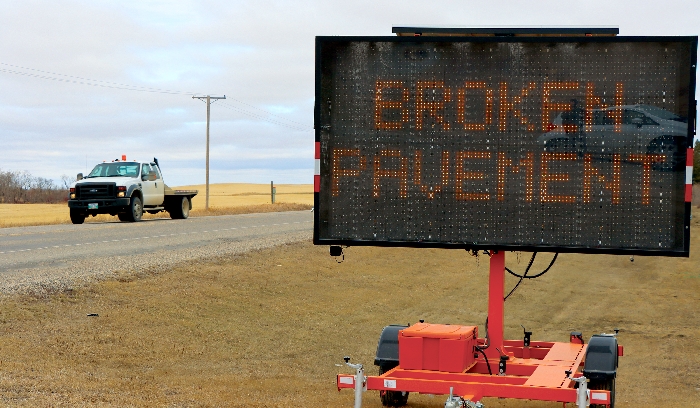 The Department of Highways placed signs on Highway 8 between Rocanville and Moosomin warning of rough road conditions. Temporary repairs are under way and more permanent repairs will be done when conditions allow.

Many drivers may have noticed rough roads, accompanied by a sign warning of broken pavement on Highway 8 between Moosomin and Rocanville.

Due to the impacts of winter, conditions on Highway 8 have worsened, but the Ministry of Highways says temporary repairs are being made and more permanent repairs will be made once conditions allow.

"Highway 8 north of Highway 1 to Rocanville experienced significant, unexpected distress over the winter. Our crews are frequently monitoring the condition of the road and making emergency repairs as required, and warning signs and variable message boards are being put in place to warn drivers of the conditions. More permanent repairs are difficult until the spring thaw has completed, but when conditions allow crews will be carrying out repair work, including deep patches and sealing," said the Ministry of Highways.

"They are crushing now and weather permitting they want to start road work in two weeks with paving on Highway 8," says Saskatchewan Highways.

As part of the 2021 Saskatchewan budget, the Government of Saskatchewan is investing $830 million into highways.

Minister of Highways Fred Bradshaw says the government has a lot of projects included in the 2021 budget. 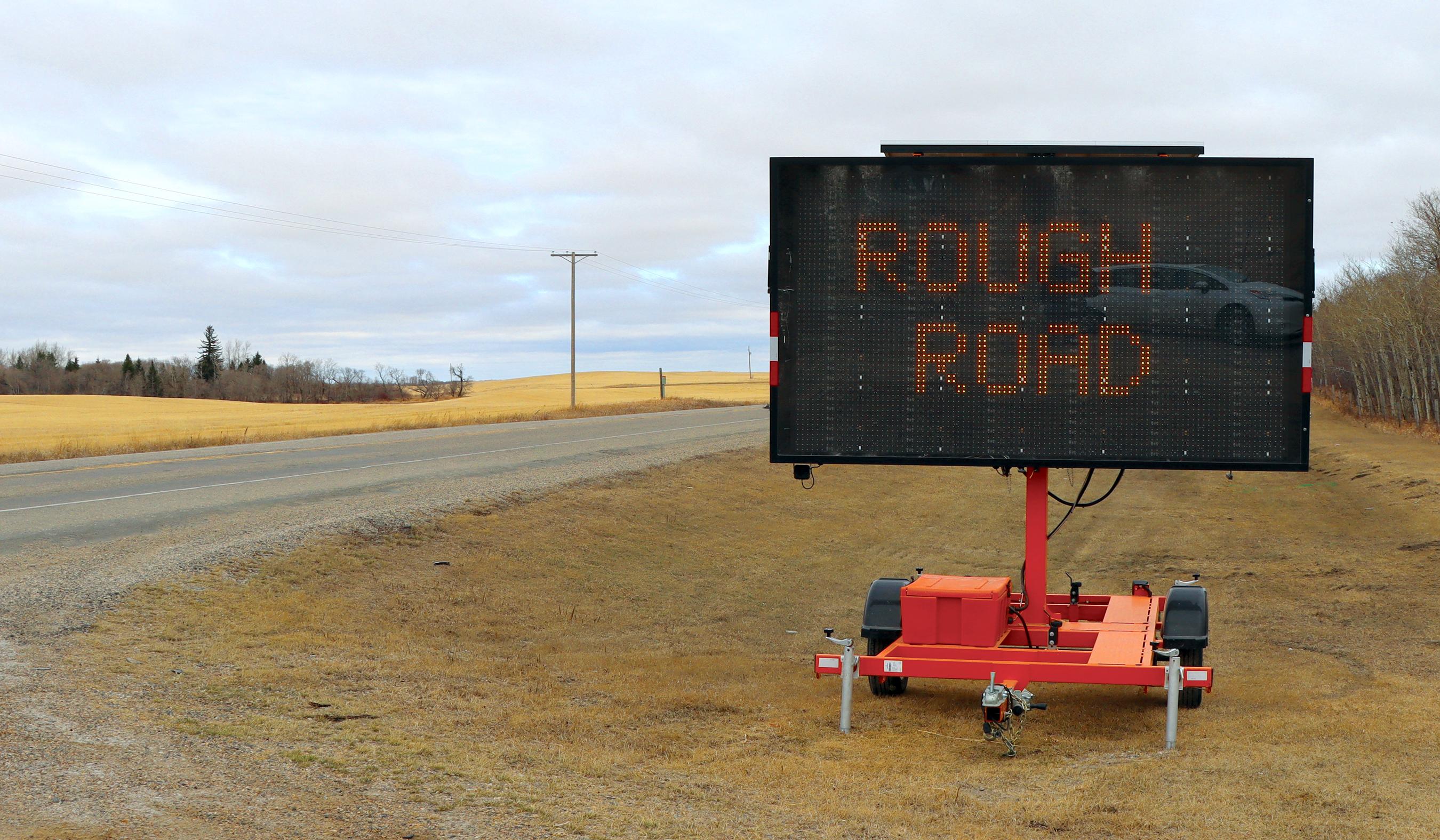 Signs on Highway 8 between Moosomin and Rocanville warn of a 20 kilometre stretch of rough road and broken pavement.

"We have an $830 million budget for highways. We're looking at doing a lot of work on our highways, some of this is stimulus work that we're doing. We're beginning work on twinning Highway 3, west of Prince Albert that was just announced, and multiple stimulus passing lane projects on highway 2, Highway 3, Highway 12, Highway 14, and Highway 16. We're all about safety, and the passing lanes really help out on the safety end of things. Weve got three more sets of passing lanes on Highway 7, Kindersley to the Saskatchewan-Alberta border, said Bradshaw. 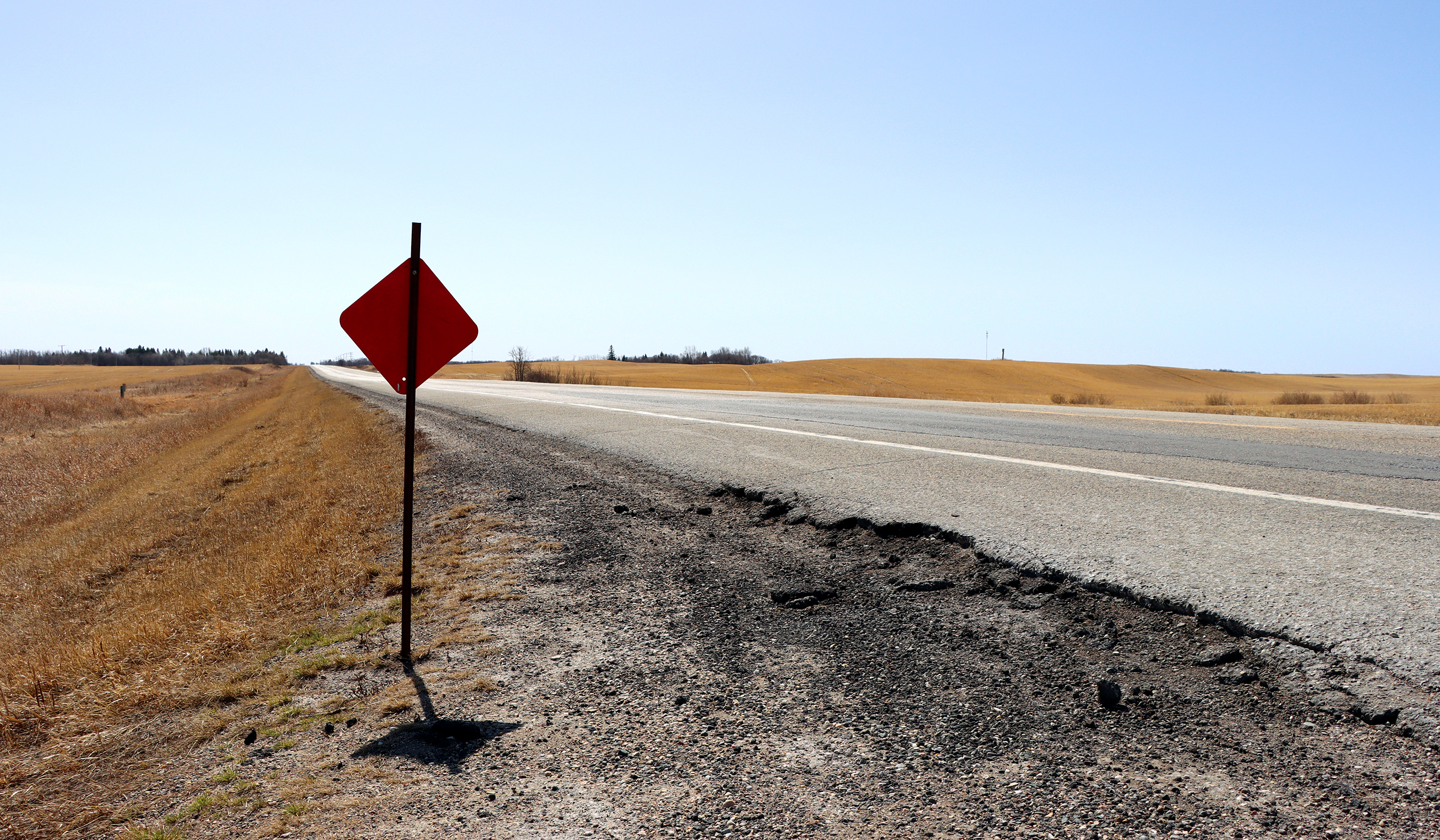 The Government of Saskatchewan will also be focusing on completing the remaining passing lanes on Highway 39 as well as two sets of passing lanes and widening on Highway 5 from Saskatoon to Highway 2.

In the budget, the Government of Saskatchewan says they will be improving 1,350 kilometres of provincial highways as part of their 10-year Growth Plan.

Highway 16 from Springside to the Saskatchewan-Manitoba border will see multiple passing lane projects as part of these improvements.

Bradshaw explains that the Government of Saskatchewan has also set its focus on intersection and road safety.

"We've been working on intersection safety and we've started doing that here a couple of years ago and we're continuing on. We have a five-year plan and we're going to invest $100 million into our intersection safety. That's going to improve the signage, the sightlines, rumble strips, and various different things. It's an ongoing thing. After the Humboldt crash, we wanted to make sure we have very safe highways across Saskatchewan and some of these things were lacking a little bit," said Bradshaw.

In total, $22 million will be invested in road safety projects around the province, which includes flashing warning lights, rumble strips, pedestrian crosswalks, and other intersection improvements across Saskatchewan.

This includes intersection rumble strips at the junction of Highway 9 and Highway 22.

Bradshaw also noted $455,000 being invested in a mowing program to improve control of noxious weeds, increasing the current program by 22 per cent. The program will deliver 7,500 kilometres of additional right-of-way mowing.

A total of $1.6 million increase to the pavement marking program was also added to the 2021 budget. This includes a $530,000 increase in maintenance funding on TMS highways.

Bradshaw says that highway improvements are something that the Ministry of Highways continues to keep its eyes on. 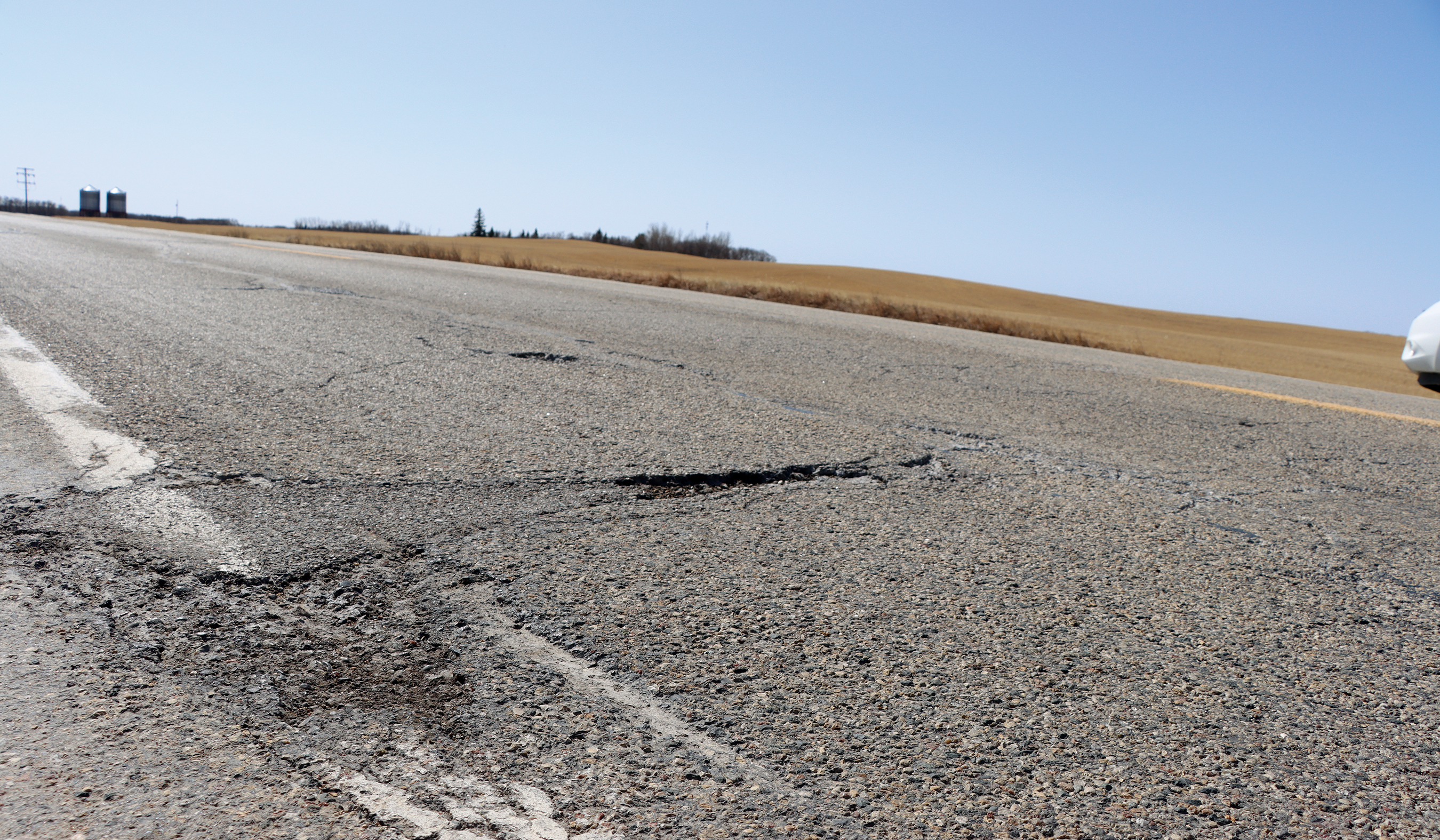 Highway 8 between Moosomin and Rocanville suffered a lot of damage late in the winter.

"There isn't an MLA in rural Saskatchewan that doesn't have a highway they don't want fixed. We have spent record amounts since we were elected on highways and are continuing to do that. Our 10-year growth plan is to work on all of the highways in Saskatchewan. It is a continuous process that we have to continue on at all times. Everybody wants a perfect highway, and we're never going to get things absolutely perfect. But what we will do is continue to maintain the highways as well as we can. Since our government was formed in 2008 we have put $10.6 billion into highways and have improved over 17,000 kilometres of highways. It's an ongoing situation and we want to keep up. Saskatchewan does have its challenges, we have our winters and it does get cold and we have our frost. But there are new technologies out there all the time and we're looking at these technologies to see how we can improve our highways."

With the 2021 budget, the Government of Saskatchewan has invested more than $10.6 billion in highways and infrastructure since 2008. 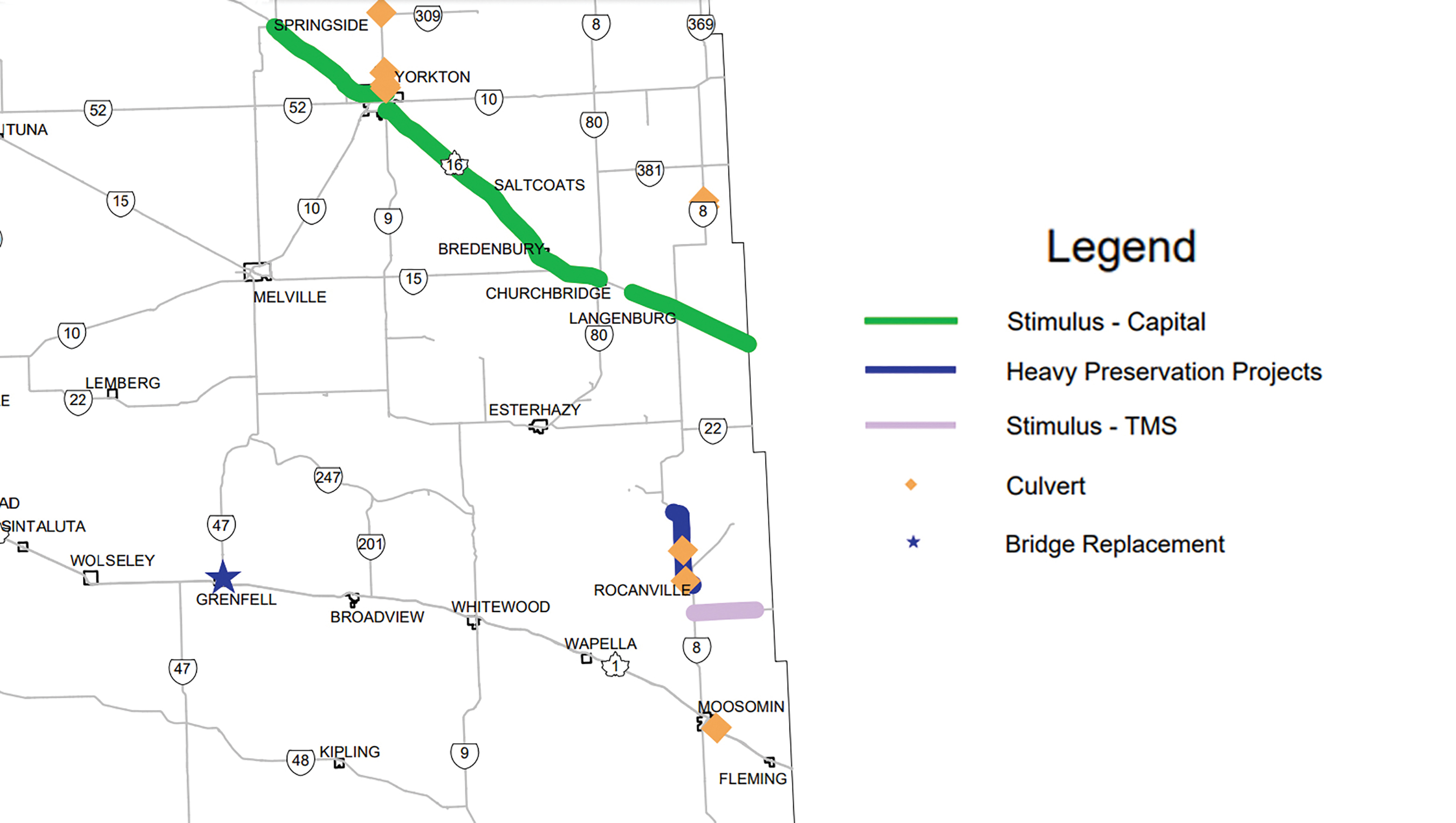 Several projects are underway this spring and summer in and around the Moosomin area.