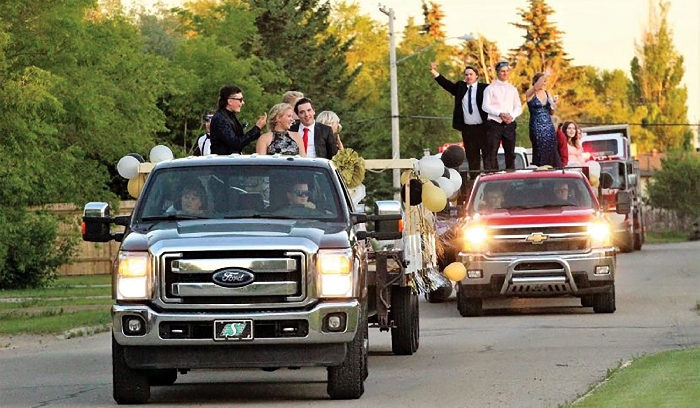 The graduating class of 2020 held a virtual grad ceremony followed by a parade. Because of the ongoing COVID-19 restrictions, the class of 2021 will likely be doing the same.

Like many schools across Saskatchewan, the Redvers School is making preparations for a virtual 2021 graduation ceremony due to the current, ongoing COVID-19 restrictions.

Last year, the 2020 Redvers School graduating class had to work around the same restrictions. To make up for the group-size restrictions, the class of 2020 took part in a parade around town to celebrate their important day and show off their dresses and suits.

Virtual graduation was also held for the 2020 graduating class that included pictures of the graduates, well wishes from staff and parents, a valedictorian speech, awards, and even an ending that concluded with the school mascot, Rambo, setting off a confetti party popper.

Grad Advisor for Redvers School, Chylisse Marchand, says the graduating class will be taking part in a digital ceremony that she is putting together.

She explains that each student in the graduating class will have a personalized introduction for the virtual ceremony.

Right now our plan is to have a virtual graduation ceremony. I actually have already got the kids to send me the answers to a questionnaire of thing I put out, so thats how I will put together their introduction. Ill introduce all the kids virtually, and Ill make a PowerPoint presentation with photos and then I will voice it over with some of their hopes and dreams and things they want to accomplish, then Ill finish it off with well-wishes from teachers and parents, said Marchand.

It would be difficult to believe that we could somehow have something held outdoors. That is what we initially planned, but I think right now its pretty safe to say that even if we can it will still be fairly small. Id rather be prepared and I have a majority of it ready to rock-and-roll and put into a video.

Marchand notes that if the current COVID-19 restrictions lift, they are willing to change plans for graduation, however she says that is not likely to happen.

Other ideas for graduation plans are welcome, Marchand adds.

She also says that the parents are planning on holding a parade much like last years for the graduating class.

You never know when things will change, Im open and willing to hear some other ideas too. Right now this is what I am doing and the parents are actually organizing a parade. The kids will have a parade on June 11th in the evening.

While many students held out hope for normal graduation, Marchand says they were understanding of the current situation.

I think all the students went into the school year knowing that it was going to be a bit of a different year. Before Christmas, we thought we could be hopeful and intended to have their immediate family at the ceremony, but for the most part, when I had to break the news to them that this was the direction we were going, they took it in stride and they know its going to be a weird year. But they also know theyre going to have Facebook shoutouts. Each student will have a day where they get acknowledged for their accomplishments. They also have their parade and their virtual grad. Theyve been very good.

Marchand says that she would much rather hold a normal graduation ceremony, but they will do what they can with the current restrictions.

Plans for the 2021 grad parade are still in the works.

Organizer and mother of a 2021 graduating student Diane Potapinski says that last years parade was something that was well received within the community and she hopes it is well received again this year.

She says that details are still being worked out, but they are looking forward to the event.

The parade will be planned for after any ceremony that might take place with the graduates. Last year, some graduates shared floats or they had individual floats and the parade was led by the RCMP and the fire department.

We will make sure that we follow all the COVID protocols with social distancing and everything, but we think its important that we have a parade like this to acknowledge the kids and let the community in on the celebration, especially if the actual ceremony has to be virtual, Potapinski said.

She says that the parents are working out details regarding the route for the parade and how the floats will operate this year.

Because of the success of last years parade, the organizers are hoping to follow the same format.
Last years parade went over very well and was received very well by the community and I think well try to follow up with the same format as last year. We havent really had a chance to discuss with all the families and all the graduates yet and its really important that we have everybodys input and everybody gets a say in how things are done. Its their big day.

The details will be ironed out later as to how the route will look, how the floats will play out, whether theyll be individual or two or three students per float if they can social distance, or if they want to decorate individually. There are so many details that need to be ironed out yet, but its definitely something that can be easily done with the COVID restrictions and let everybody participate as well as the community.