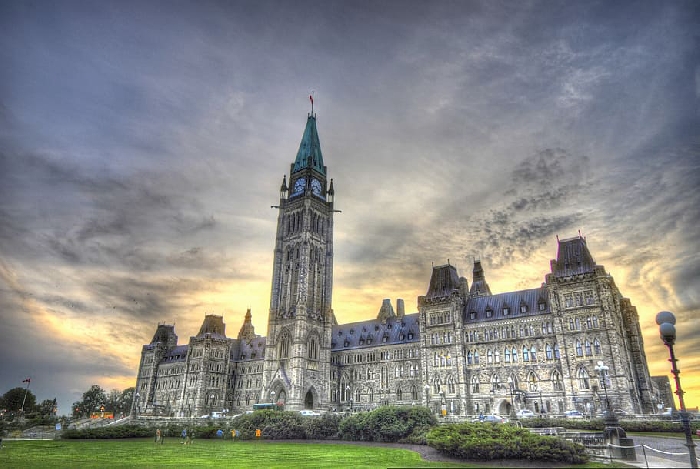 The federal government has announced more than $101 billion in new spending in Monday's budget.

The budget shows that the federal deficit is projected to sit at $354.2 billion for the year that just ended, with it slated to drop to $154.7 billion in the current 2021-22 fiscal year.

The 2021 federal budget outlines a $12 billion plan to extend key COVID-19 business aid programs and commits to continue other income support measures, while plotting out the reopening of society and international borders.

The government is also planning to extend the federal wage and rent subsidies and lockdown supports. Set to expire in June, the supports will now be available through September, as well the Canada Recovery Benefit aimed at people who arent covered by employment insurance (EI), though the $500-a-week support will drop to $300 per week after July 17.

Billions more is being earmarked to support affected workers though a range of steps, including a series of changes to the EI program, which includes extending the EI sickness benefit from 15 to 26 weeks and continuing to offer COVID-19-prompted caregiving supports in the short-term.

The Liberals have signalled that they also intend embark on a $3.9 billion endeavour to reform EI and make it more accessible and streamlined.

The government plans to spend:

$3 billion over five years, starting in 2022-23 to support the provinces and territories in creating and upholding high standards of care inside long-term care facilities;

$2.2 billion over the next seven years on boosting Canadas biomedical and life sciences research sector to in part increase vaccine development;

$424 million in 2021-22 to ensure the safe reopening of Canadas borders, through funding further air travel protections and mandatory quarantine measures;

$100 million over the next three years, to support projects for mental health interventions for populations disproportionately impacted by COVID-19, such as health care and front-line workers; and

$41.3 million over six years starting in 2021-22, for Statistics Canada to improve data infrastructure and data collection.

The government is setting aside $30 billion over the next five years with permanent ongoing funding to enact the national plan and create more spaces, including for Indigenous families and children with disabilities.

The governments aim is to reduce the cost for regulated early learning and child care by 50 per cent by the end of 2022, with the goal of reaching an average cost of $10 per day by 2026, everywhere outside of Quebec, as the government says it is time for the rest of Canada to learn from Quebecs example.

This is an economic issue as much as it is a social issue. Child care is essential social infrastructure. It is the care work that is the backbone of our economy. Just as roads and transit support our economic growth, so too does child care, reads Freelands budget.

Freeland is also planning to bring forward legislation to establish a $15-an-hour federal minimum wage, rising with inflation. The minimum wage would stay higher in provinces where the hourly rate is already above $15 per hour. This would apply to the federally regulated private sector, for example transportation and banking.

The government is also promising to:

Extend the waiver on interest on federal student loans through to March 2023; and

Increase Old Age Security for seniors ages 75 and older by 10 per cent, providing up to $766 more for eligible seniors in the first year.

The 2021 federal budget promises to create 500,000 new training and work opportunities over the next five years, and sets aside billions in new spending aimed at fostering innovation.

There are several streams through which the government intends to meet this goal, such as student placements, apprenticeships, skills training or re-tooling, and other workforce programs including the Sectoral Workforce Solutions Program aimed at helping fill in-demand jobs like personal support workers, and in constructions sectors.

The government will also be launching a new Canada Recovery Hiring Program that will run from June to November and act as a transition from the federal wage subsidy for hard-hit industries.

This short-term program will be available to Canadian-controlled private corporations, small businesses, charities and non-profits that are looking to hire workers in the coming months and the economy begins reopening.

The government has set aside $595 million for this hiring program and each eligible employee would be subject to a maximum of $1,129 remuneration per week over a four-week period. It can be used for both new workers and rehiring laid-off staff, but would not be available to employees who have been furloughed.

Budget 2021 proposes to expand the Canada Workers Benefita refundable tax credit for people with low annual incomesby $8.9 billion over the next six years. The government expects this will make one million more Canadians eligible and incentivize second earners to return to the workforce by raising the income level at which the benefit starts being reduced to $22,944 for single individuals without children.

The government is also:

Earmarking $214 million in the next year, as part of an overall allocation of $921 million over the next five years to help entrepreneurs, including dedicated funding for women and racialized entrepreneurs;

Making $50 million available on a cash basis over the next five years for entrepreneurs to have increased access to venture capital; and

Creating a Canada Digital Adoption Program to help 160,000 businesses with the cost of new technology and provide them with the help of young Canadians who will be trained to help set up new e-commerce opportunities.

The government is projecting that the unemployment rate will decline from its peak of 9.6 per cent in 2020, to 8 per cent in 2021, and become lower over time.

A national tax on vacant property owned by non-Canadian, non-residents thats estimated to bring in $700 million over four years, starting in 2022-23;

A luxury tax on big-ticket items like vehicles and private aircraft with a sales price over $100,000 and for personal use boats that cost $250,000 or more. Coming into force this coming January, the government estimates this will bring in $604 million over five years; and

Implementing a Digital Services Tax at a rate of three per cent on revenue from web giants that rely on Canadian content. It is estimated that this will raise $3.4 billion in revenue over the next five years, starting this year.

Freeland is also proposing to reduce the operating budgets of the departments and agencies with the highest historical travel costs, promising savings of $1.1 billion over five years, starting this year.

All of what is being presented Monday will be subject to days of debate in the House of Commons. If the Liberal minority government isnt able to secure support from another major party, the government could fall within weeks, prompting a snap election, as the budget is considered a key matter of confidence.