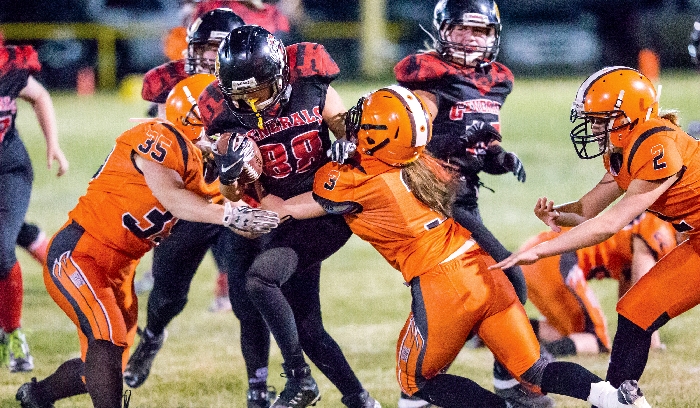 The Moosomin Generals football club are keeping a close eye on the Covid-19 rules as they gear up for a spring season. The shape that season will take remains to be seen.

Whatever the rules allow us to do were going to do, says Generals GM Jason Schenn. So as we get into the spring here and things evolve, we might only be flag, it might be some drill practices or something like that. But whatever we can, were going to try to make happen.

My overarching goal here is that if we cant do anything thats normal, were just going to try to do it as a free thing. Just to get kids back out and doing something again. If we can do five flag football then well do five flag football, as we can start evolving it at some point to tackle. We are just going to be as flexible as possible to get something happening.

The Generals are part of the Rural Manitoba Football League, which makes it tough since Manitoba has different Covid precautions than Saskatchewan.

That definitely has made life a lot more difficult, says Schenn. The school divisions have a lot of power and a lot of the schools have said no, you cant use school equipment, you cant use fields, you cant do anything. Youve got a lot of teams that are shut down until fall. But if we ever did get a situation where things opened up, we would just open it as a league based program rather than a team based program and if anyone wants to register we get them together and we try to play.

It seemed like we basically lost spring. There wasnt a whole lot we could do in spring but we were still able to do some flag football and everything was so new (with Covid) and it was evolving so fast, says Schenn. Come fall, it was more frustrating because our girls team actually was able to play and do something, but we werent able to do it with any of the boys programs.

But we learned a few things about how to be a little more nimble as things develop. So I think this year were a little more prepared. Were not second guessing anything anymore. If theres a little thing we can do today, lets do that and right now its all about weather. So if we get rid of the snow here, Im hoping by the end of April well be able to start doing something and then just try everything we can to keep it going.

Schenn says he knows that the kids are eager to play, and he understands that.

They want to go out and play. You dont join a sport to practice. You join the sport to have fun and play the game. We have to ask ourselves how can we do this, how can we structure this that the kids can have fun? Whatever it is we do, we can do it and they have fun. Fun is probably our best bet. Flag is probably our best bet because that has pretty minimal interaction and contact. You can still do a lot of stuff. Its a lot of running around and it should be fun, its a fun sport that way.

So Im hoping that were going to be able to modify a few of those things to be good enough to go, even with a limited number on the field.