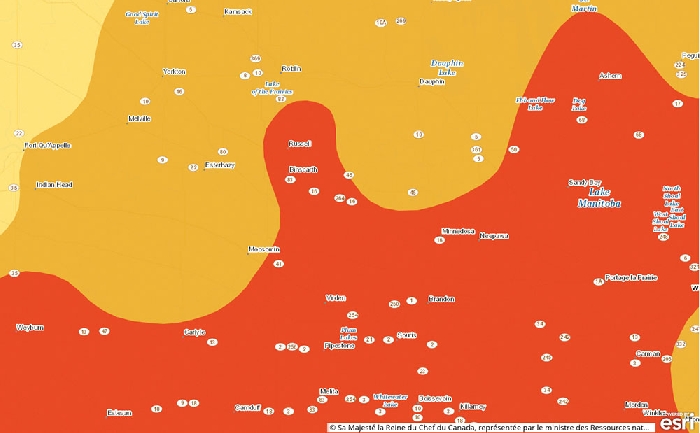 A dry fall, winter, and spring have led to historically dry conditions for much of the Prairies according to David Phillips, Senior Climatologist with Environment Canada.

Phillips says southeast Saskatchewan and Southern Manitoba are facing extreme dry conditions. It is serious and it is quite possibly unprecedented, and its historic, said Phillips.

He says the dry spring when matched with a dry fall and winter has led to minimal moisture recharge for the region.

The situation is dire, as we know. There has really been no recharge since last fall in some places in the Prairies and this really is Prairie-wide. I would say its probably the worst in the southeast corner of Saskatchewan than anywhere in Saskatchewan, and its the worst in the Prairies in southern Manitoba. Theres not one area in Manitoba that has near-normal precipitation, everything is well below, and were talking about less than 40 per cent of normal, Phillips said.

In southeastern Saskatchewan, you have about 50 per cent of what you normally would get since last September. September through to now is generally the dry period but we still have moisture recharge where youre getting rain, snow, melting snow, or spring storms. This adds to the moisture bank and helps add some optimism to the growers and ranchers and gardeners that want to have a decent chance at a good season.

The good news is that your wet season really begins in May, June, July, and August. About 60 per cent of your annual precipitation occurs in those four months. Its not as if you lose your crop in February or March if its dry, but growers are clearly behind the eight-ball.

This could be perhaps the most serious weather disaster this year in Canada the drought on the Prairies. But well have to see, some welcome billion-dollar rains can come in late May and June or July. June is typically your wettest month in your area, its almost the monsoon month. Its not as if farmers are ready to throw in the towel and declare a crisis, theyre eternal optimists and they know that the weather just comes and goes and it could very well be that they could recover.

Phillips says the dry conditions have been building up for some time.

This drought is referred to by some as a mega-drought because its not just one year. When we look back in the past four years many places in the Prairies have been in a moisture deficit for the last four years. In parts of southeastern Saskatchewan and Manitoba, when we look at the last 18 months, were probably half a year less of precipitation than we should have. We would need a rain today of 250 millimetres to break even over that 18 months. Thats how serious this is. All the dugouts and sloughs are drying up, there was no flood season at all, it was almost a drought season when it should have been a flood season.

The kind of precipitation you do get through the dry season is typically the thunder-boomer where you can get part of your field wet but not the other. What farmers need is one of those slow, drenching storms that stay around like an unwanted house guest that just wont leave. Day after day after day of overcast and rain, but not a hard rain, because that water would just run off into the rivers quickly and wouldnt work for your soil. If it falls, you want it to be a slow rain that gets into the ground and into the lower soil depths and gives that drink of water to the upper topsoils.

A large portion of the southeast saw mid-April snowfall that sparked hope in many producers across the region hoping for moisture to kickstart the growing season, but it wasnt enough to create precipitation through evaporation.
Weather begets weather. Drought begets drought. Floods beget floods. What you see is often what youre going to get. So with that system that came in there in April, the hope was that it would be a game-changer. That we would begin to see precipitation mechanisms that had been devoid in your area for 18 months start to take place. But it was almost just a placebo, it didnt occur, Phillips said.

He says the situation is dire.

It doesnt matter which way you look at it, whether it be agronomists, farmers, or hydrologists, its a serious situation because of the absence of precipitation for so long. The seeds of this drought were sown not just in September but also four years ago. Its not going to be over and the forecast is not necessarily good. The only thing you can say that is good is that its been cooler. Its been almost a retreat of spring, which means theres less moisture extracted from the ground, which helps. But you need the moisture there to start. All of the conveyances of carrying the water, the rivers, and streams, are all dry.

It is dire, for sure. There is no way you can sugar-coat it. It is a serious situation and sometimes droughts can be one area. Those are not the worst ones because it at least means theres some part of the province that is doing well. But when you look at all of Saskatchewan, theres no area that shows above normal or near normal. Normal is what youd like, above normal would be money in the bank. It really is from central Alberta, all through Saskatchewan, and particularly south of the Manitoba lakes in Manitoba. Ive never seen it so dry in this part of Canada, its almost as if nature forgot how to precipitate in parts of the Prairies.

Winnipeg has not seen conditions this dry since 1961 according to Phillips.

Dry conditions not only impact producers but can also pose a fire risk. Phillips says the southeast is entering fire season and the dry conditions make it more dangerous.

The fire season comes alive in May. We get some dry conditions and lightning and that could see wildfires and grass fires and weve already seen some of those.
Tweet