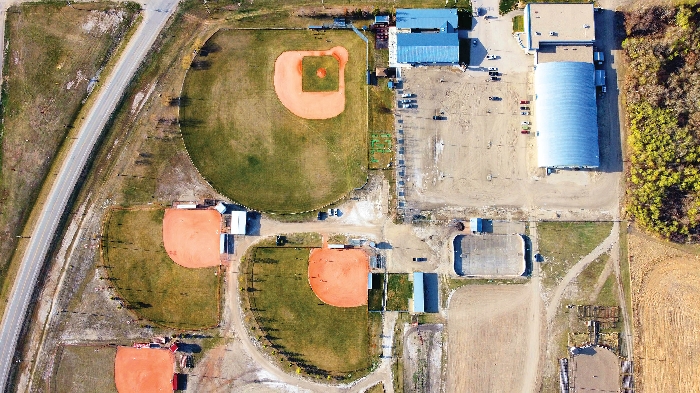 An aerial shot of Bradley Park, where the paths are being developed.

The town of Moosomin will receive a $50,000 grant from the federal governments Canada Healthy Communities initiative to develop winter and summer paths at Bradley Park.

The grant will pay for equipment and signage for the towns walking paths, skate path, and ski trails at Bradley Park, all of which are new additions.

This grant came up a while ago, I think I applied back in February, and its cool for us because we can do a whole bunch of winter stuff that we havent been able to do before, because we just didnt have the funding and we didnt have the equipment that we need.

Were developing the walking trails, and we got the skate path started last winter. We wanted to do the skate path because there was so little to do because of Covid.

We had talked last year about doing cross country ski trails, but we just didnt have a groomer. We didnt have the equipment to do it but now we do with the tractor, we can use it for the winter paths and we can prep up all the walking paths in summer. This grant is just idealitll give us everything we need for those paths.

There will be a network of paths around Bradley Park, including 13 different walking paths, the skate path and the ski trail.

Im thinking the cross country paths will leave from the Sportsplex and go out to the baseball diamonds and around. So theyll kind of expand on the area we used for the skateway track, says Schwean.

Schwean says the walking paths should be completed this summer.

He said this grant is a new one for the town.

We never got this grant before but I think its a cool project. We were able to use pictures of the skateway this year, which has helped us in a few grants already. Now I envision a whole skateway park being extended a bit and then the ski trails will go around the track and back. Itll be half a mile by the time you leave the Sportsplex and come back, if you do it a few times. Certainly for a long-time avid cross country skiier its not going to be probably long enough, but for people to try it, its certainly something they can do, its one more option.

This grant will help so much. Well have everything we need to do the ski trails, the skate paths, the walking paths. Weve never had that type of equipment before.