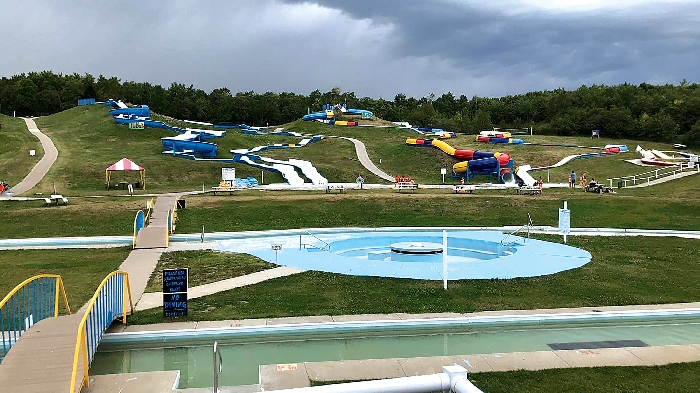 The Kenosee Superslides plan to open on June 30 with a maximum capacity of 150, a capacity that Jan Armstrong says will not be sufficient to support the park financially

The Kenosee Superslides is aiming to open its doors on June 30.

Under the current COVID-19 guidelines, the Superslides will be restricting its capacity to 150.

Jan Armstrong, Vice-President of Marketing and Sales at Kenosee Superslides, says the park staff will do their best to open up before the July long weekend.

We are absolutely looking to try, try being the operative word, to open. Were focusing on July long weekend because its such a big weekend for the park and for the Kenosee area in general. So were looking to try for Wednesday, June 30. While its not an absolute, set-in-stone date its a date were shooting for, said Armstrong.

Armstrong says that the Superslides bring in around 70,000 visitors a year, a number that was significantly impacted last year by the capacity restrictions.

While Armstrong says he is planning to open the Superslides even with the restrictions but notes the financial strain it will have on the park should the restrictions remain in effect for a second year.

We had a limitation of 150 people last year and it was catastrophic for us. Our park is a 4.5-acre waterslide park, and on a regular year, we are allowed 1,000 people per acre on our park. So that gives us a capacity limitation of upwards of 4,000 people, but generally speaking on busy days were only at 1,500 people. So its not even close to the max capacity of this park. But if we cant add an extra zero on the back of 150, were doomed. Its not going to be good for the park, because last year it was financially terrible for this park because of the capacity restrictions.

Despite reaching out to the government to try and work out an alternative, Armstrong says that at this time the park will remain limited to a capacity of 150.

He argues that the size of the water park should allow for an increased capacity.

Weve been trying to work with different organizations in the government but theyve still placed this 150 person limitation on this massive waterpark. If we have 150 people in this park it looks empty, it doesnt even look like its open. Especially on things like long weekends where were getting lots of numbers, people arent going to drive out here.

Armstrong argues that the capacity limitations also affect businesses nearby, noting that the traffic brought to the Kenosee Superslides is also brought to nearby communities and businesses.

All of these people benefit from what we bring into the park. But were not allowed to bring in those people and people are saying they wont go because they cant get in if were full so they just dont show up.

Armstrong holds out hope that the maximum capacity is raised before his plans to open the park on June 30.

He says that without increased capacity, the park will suffer the same financial strain it did in 2020, which he notes could lead to bankruptcy.

The fact is if we dont open up this year with at least 25 per cent capacity, next year this place wont exist. That is the long and the short of it, said Armstrong, noting that the park will need to catch up on the lost revenue from 2020 as well.

If we dont cover that this year, we will go into bankruptcy and this place wont exist. As it stands right now, weve gotten some support from the government but weve been trying to work with the Business Help Line, who were supposed to help us increase our limitation.

While the Re-Opening Roadmap could increase the maximum capacity of the waterpark later in the season, Armstrong says the long weekends are essential to the park.

He says that on a normal year, roughly 20,000 people go to the waterslides over the long weekends.

Armstrong says he is going to continue pushing for an increased capacity, saying that a minimum of 25 per cent capacity will be required to operate the park and create revenue.

My father and I are going to go down fighting. Were going to throw haymakers until were in the ground or this place opens. We want this place to stay open, we love this park, we worked for this park for around 10 years, we developed amazing life-long friends with the staff and other business owners because of this place, weve fallen in love with Moose Mountain Provincial Park and the area. Its one of the most beautiful places in the province.

I have so much love for this place and the potential for what it can do for the area, not just for Kenosee Lake as a village and Moose Mountain Provincial Park as a park, but for the other surrounding communities like Kipling and Carlyle. Its so important for us. It has been a big part of my life.

This is something Ive dedicated a large part of my life to and to see it falter and to see everyone else have to falter because of the numbers that arent coming in anymore, it would break my heart. It would kill me. It would just be awful, so I have to keep fighting. No matter how hard it is, we have to make this waterpark great again, Armstrong concluded.