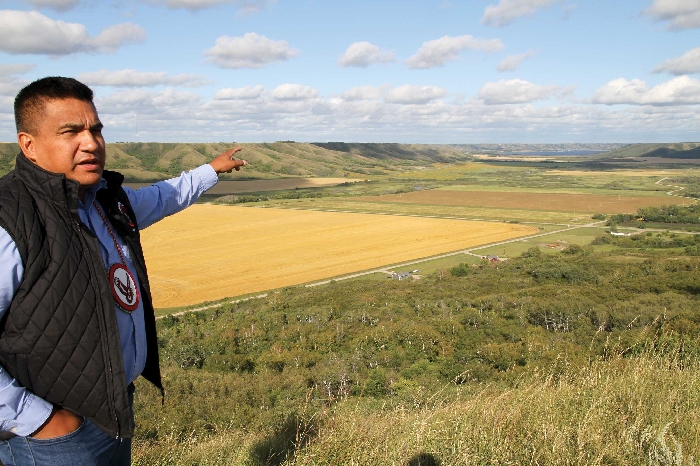 Following the discovery of the remains of 215 Indigenous youth in unmarked graves at a Kamloops, B.C. residential school, Indigenous communities across Canada are calling for action from the federal government.

Chief Evan Taypotat of the Kahkewistahaw First Nation says the discovery that made national headlines has brought renewed awareness to the horrors of residential schools.

First and foremost the impact has put residential schools back in the spotlight. Sometimes we as Canadians forget that an atrocity has happened and certainly for us we never really want to recognize it but we have to admit and understand what happened at those schools. So I think that putting it back in the spotlight is a good thing. But the second part, the negative part, is it opened up a lot of old wounds for our people that attended those schools. Many of our people have attended various residential schools and underwent much mental, physical, and sexual abuse. So for them, the healing process has restarted and its very sad what was found in Kamloops, Taypotat said.

Upon hearing the news, Taypotat says made an announcement on social media asking for prayers.

We sent a message out on social media letting everyone know to pray and think good thoughts. For us, holding an event is a good thing but it also would open up those old wounds. So we kept it to social media and didnt do anything physical with Covid-19. Were still being cautious, but were asking our people to pray for those young kids.

He says that social media has provided a way for many survivors to share their stories, noting that many of the stories have happened to the Kahkewistahaw First Nation.

Physical, sexual, mental hardships happened here. A lot of the stories you see on social media happened to them too. For us, its been a discovery that has opened a lot of old wounds, especially with the worldwide attention it has gathered, said Taypotat.

Taypotat says that action is needed and calls for those who operated residential schools and those who committed abuse to be taken through the judicial system.

Its important to understand that we convict people for doing crimes like killing children or sexually assaulting minors. This should be no different. People that ran those schools, the priests, the nuns, the administration, many of them are likely still alive and I very well know they did society wrong, they did Indigenous people and children wrong and I think they need to have their day in court. If it was any other group that did that, Canada would put them in court. We have to right that wrong, and in Canada, we do that through the judicial system and I would expect nothing less than that to happen.

As efforts are made to investigate residential schools across Canada, Taypotat says it will cause pain for the First Nations but also provide opportunities to heal.

This is the tip of the iceberg, there will be other mass graves found in Canada and there will be more hurt to come, but we as First Nations people have to turn this into a positive as best we can. Were going to heal, but along the way, were going to cry. Hopefully in time we can right this wrong and move Canada forward in a positive way, said Taypotat.