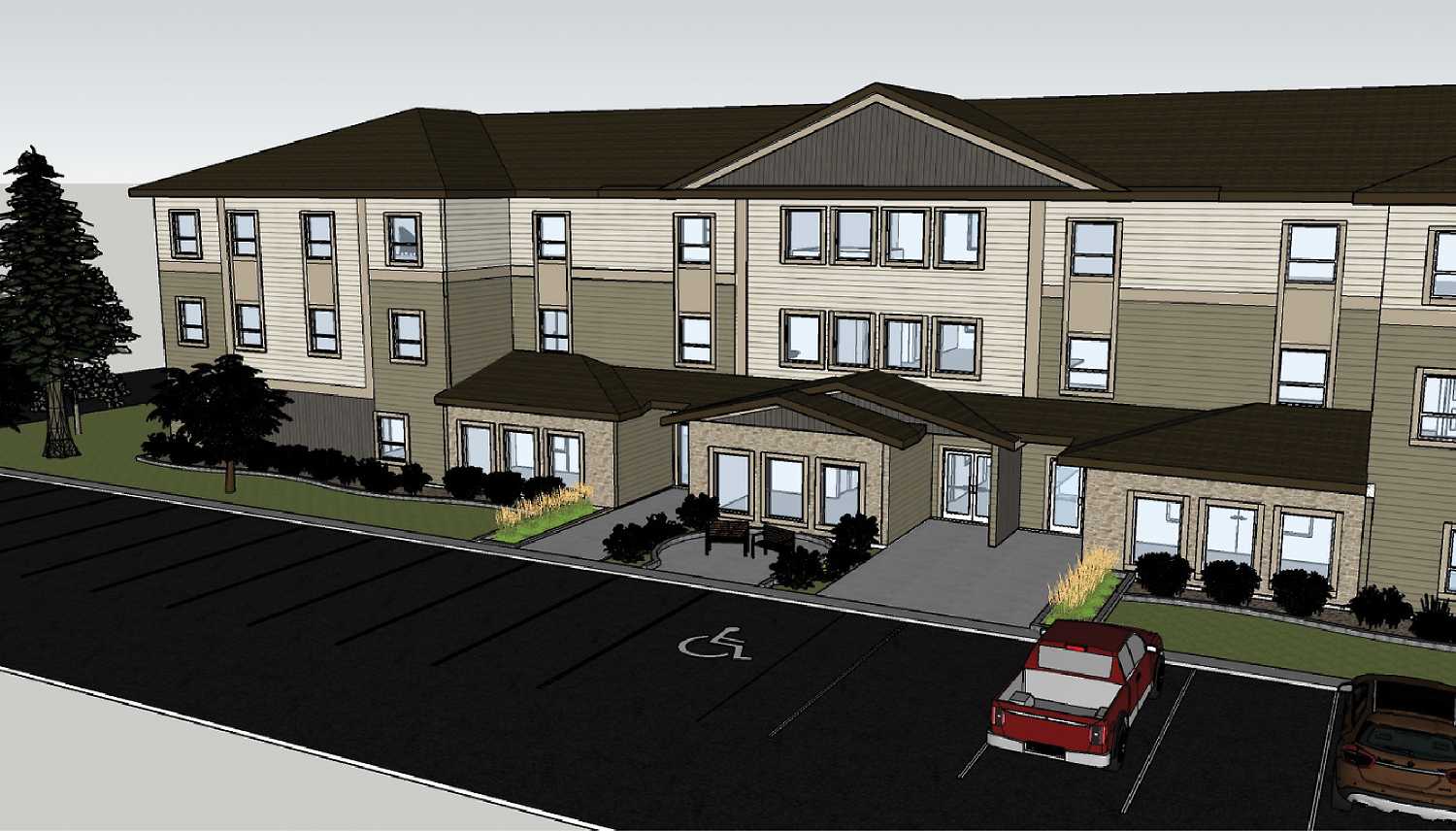 A rendering of the front of Pipestone House which will be built on Wright Road next to Pipestone Villas.

After visiting Moosomin recently to meet with investors in Pipestone House, Larry Scammell with Kohr Capital says he is confident the 42-unit long term care/assisted living facility can move forward.

The group will be back in Moosomin September 13-15.

Following is an interview with Larry on the progress of the project:

How did it go talking to local investors and where are you at now with this project?
The first thing that Id like to say is the project is moving forward, it is proceeding. Theres no question to that. At this point if I put the pressure on myself, really its a matter of when, not if, and the when is determined when we get all the equity/investors assembled in order to get a shovel in the ground.

Where would you say you are? Are you 40, 50, 60 per cent to where you need to be?
In terms of commitments, we have a substantial commitment, the reality is were looking for two things. Were looking for people from the community that want to participate but were also looking for some larger commitments from a handful of people in the community. Those naturally just take time. On your question about how this recent visit was, we were quite pleased with the amount of both new people that came to the table and also the progress we made with existing conversations that have been ongoing for quite some time.

What are the options for people to invest?
We have created two structures. One is the limited partnership for those who want just to invest in the Moosomin project only and then the mutual fund trust which investors can both invest and support Moosomin but also invest and support other communities such as Warman and Melfort which are the next two communities that we have lined up. They can also use RSPs if they have them, tax free savings account if they have onemost people door cash if they prefer.

Is it fair to say you can accept smaller investments in this than people might realize?
Absolutely, categorically, yes, but no investments would be accepted until we go through a Know Your Client process and people are investing an amount they are comfortable with.

People can invest $10,000 or more into class A shares which has a six per cent preferred return plus profit participation on all the assets that are in that mutual fund trust. Class B shares for the mutual fund trust dont participate in the investment like that, it has a different characteristic for investment but its a CRA requirement that we, in order to be RSP eligible, the mutual fund trust has to have a minimum of 150 shareholders in one class of share. In this case, thats a class B. We often refer to it as the founder shares.

There is an investment component to that $750 investment and once the mutual fund trust is sold or wound up, youll receive your $750 back plus an additional $750. Thats double your money in 10 years plus you get a six per cent return along the way but you can only invest $750 and only one share per personbut those shares are needed to set up the mutual fund trust, so it only costs $750 for anybody to participate and support the project.

What are the most common questions youre getting? What do people what to find out about this project?
Buy and large where I think we spend most of our time is just walking people through the structure and how it works.

Everybody that weve spoken to is absolutely a champion for the project. I cant count how many times Ive been told This is so good for the community, The community needs this.

Questions really comes down to the mechanics of the RSP and how does that work because a lot of people, most people dont know or realize that they can transfer existing RSPs, so they dont have to make a new contribution. They can transfer those existing RSPs, so no tax consequence is triggered. If somebody has $200,000 in RSP sitting with RBC they can transfer if they want to invest 20, 30, 50 thousand. Whatever their number is. If they wanted to invest $20,000 of that, they would transfer it over into an account with Olympia Trust whose our transfer agent and registered plan holder. Thats where a lot of the question of the conversation happens, is how does that work and is there any tax consequences? The answers no, it stays within the RSP umbrella and you can transfer those from, in this case RBC over to Olympia trust and invest it into the projects in Moosomin. Thats a bit of a surprise for people because most people dont realize they can do that.

In your opinion, most of the people who are investing, are they people who are saying Ive got lots saved up for retirement. Im happy to put a little bit of that into this because I want to see this project go ahead for my community. Or are they looking more just straight from the investment side and saying I think this is a better investment than what I can do on my iTrade account.
Both, but the former is almost standard. Almost everybody says I like this, I want to support the community. I get it, I may or may not have a need for this myself but that doesnt matter, its secondary to the fact that the community needs this and I want to help. The other side of this is there is a healthy return on investment component to it. If over an eight year period if we hit the occupancy numbers that we anticipate, there will be a ten and a half per cent per year return to the investors.

Since that first closing was completed, is work being done on the construction drawings at this point?
Its anticipated the drawings will be complete soon at which point Travis and Bridge Road would set out for tendering in September with a view to getting that shovel into the ground as early as October.

So in your mind, there is absolutely no scenario that this isnt going to go? Youre sure youre on the road and this is going to happen?
The ball is in play, the ship has sailed. Its moving, its leaving the harbour and its not coming back.

Were happy with the support that weve had already, weve had some significant investments, weve had some interest in the Class B shares, and for some people thats a way of showing their support without making a big investment.

Regardless of whether its $750 or $750,000, we treat everybody the same. Were thankful for their involvement. Theyre showing their support in whatever their comfortable and able.

"The ship has sailed. It's moving, it's leaving the harbour and it's not coming back."