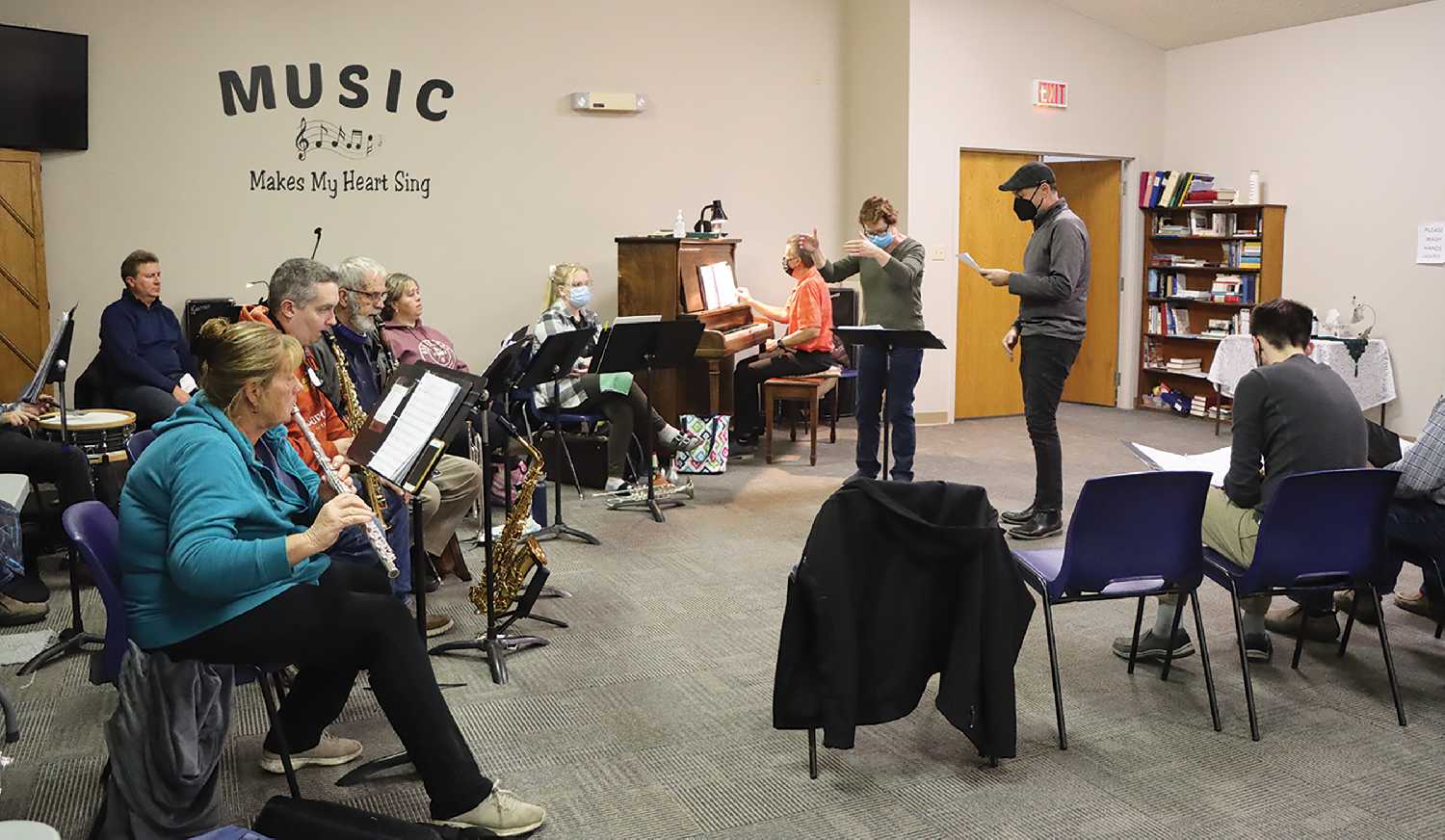 The band and some of the singers rehearsing for All Together Now with Sandra Poole conducting and Barry Rambold accompanying on piano, while Jarrod Slugoski performs a piece from Beauty and the Beast.

The production company that brought major musicals to Moosominfrom the Sound of Music to Les Miz to Into the Woods to the Music Manis bringing a concert of Broadway music to Moosomin in mid-November.

Creative Vision Productions is working on a performance of All Together Now, a special production of Broadway numbers being performed by groups around the world after many musicals were cancelled or postponed due to Covid-19 restrictions.

Theatre groups are able to perform the pieces royalty-free to allow them to rebuild after Covid-19 shutdowns.

All Together Now features songs from Beauty and the Beast, Guys and Dolls, Mamma Mia, Rent, My Fair Lady, Hairspray, and more.

Sandra Poole says the group has been busy with rehearsals.

The first month and a half we did mostly singing and doing parts and figuring out whos doing what. The last week Sherrie has been working her magic with the choreography and it is so much fun, she says. Its just so much fun to see everybody getting excited.

The last two weeks weve added the band to the picture and thats kind of fun too, to hear another dimension, says Sherrie. So I think our own company is surprised each week to see the different pieces that are coming together. 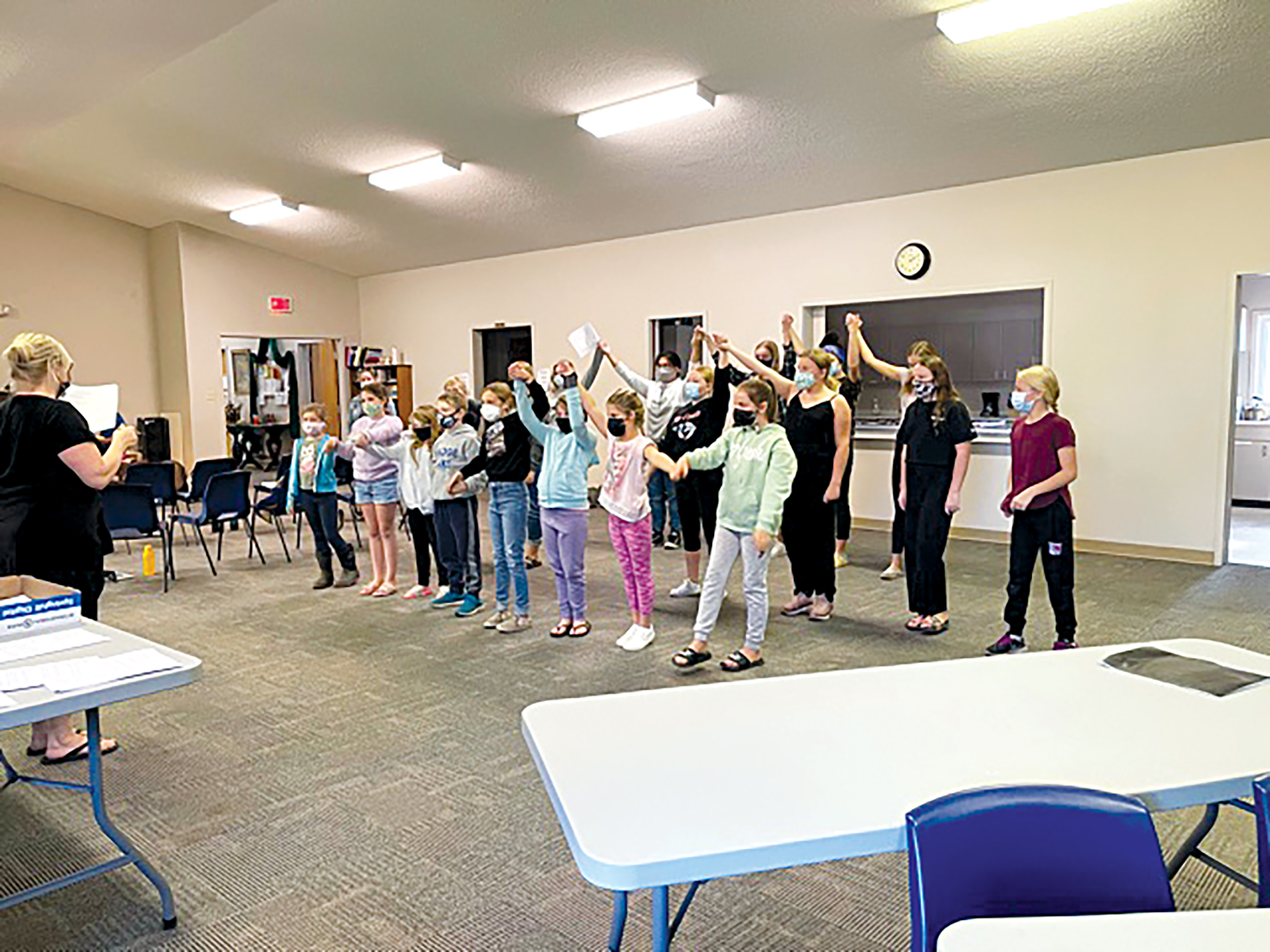 Some of the children involved rehearsing for All Together Now.

Its different than our past shows. Originally we were hoping this to be the same full production that weve done in the past but more of a review of different shows. But with different restrictions we found that it would be difficult to monitor costume changes and things like that. So weve down scaled some areas, but its definitely going to be a concert to remember. Theres singing, theres dancing, theres a band, theres props, theres backdrops. So it will be a night to remember.

Im hoping that its going to feel like theyre dropping into different musicals, says Sandra. Some pieces for exampleGuys and Dolls Sit Down Youre Rocking the Boattheres a little bit of preamble, just a little bit of spoken stuff to kind of introduce you to whats happening and then they go in. It kind of takes over just like you would if you were in the Broadway show.

Our plan is to run it blended one into the other, adds Sherrie. Its not like were going to stop and introduce the next number. There will be little write ups in the program that people can get background of the scene but some of them are in the fidelity, the context of the show and others are our take on it . . . I think it should feel like youve watched a show as it blends from one thing to the next.

While costumes and sets for this performance wont be as elaborate as a full musical, Sherrie and Sandra say there will still be lots of fun costumes and props, and that this show will have a tickle trunk feel to it.

Why did Creative Vision Productions choose this show instead of launching into a full musical again?

Partially because with a traditional musical we would have had to audition way back in April and we just knew that we werent ready for that, there were too many unknowns, says Sherrie.

And then I stumbled upon this show, says Sandra. There are 40 different countries and more than 2,000 groups all across the world that have been given this show for free. We were looking for a show that had band involvement and this one dropped into our lap for free.

And with the time frame we had, which was July until November, it was something that we could manage, says Sherrie.

Has it been a lot of fun pulling the show together?

Id even call it therapeutic, says Sherrie. Weve missed people and I know that the people enjoyed getting together and music soothes the soul.

Oh, does it ever, and when theyre leaving and Sherrie and I are still working and doing our thing and working with smaller groups, big groups come in first then we work with smaller groups on either end, and theyre walking out with new friends and visiting, and they stop and keep visiting, says Sandra.

Sherrie and Sandra say there are lots of new faces joining in this year. The show consists of 60 singers, a dozen crew, and a 10-piece band.

Theres a lot of work to be done from now until performance time, but both Sherrie and Sandra say its a labor of love.

Its about bringing people together, says Sherrie. Im especially enjoying this production because it is so many musicals. Theres so many musicals we wont be able to do, but it feels like weve got to do a piece of them all. Hair Spray, Id love to do that show, we dont have the demographic in our town to ever do it, but to do that number gives you a piece of it. So many of the shows, Guys and Dolls and Fiddler on the Roof, some of these are on our list. Maybe we will see them in the future but for now this is the little piece we get.