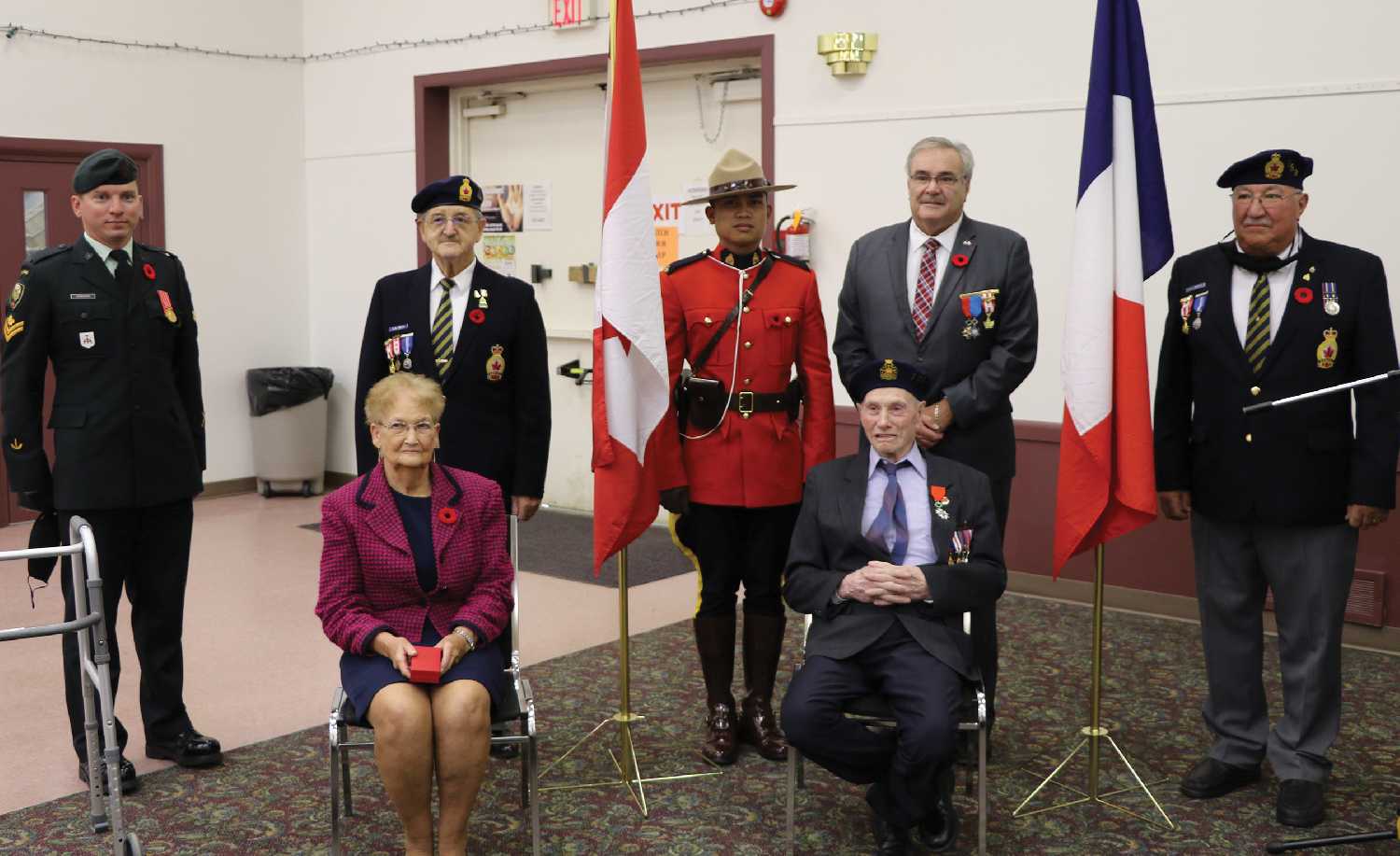 Lloyd Tibbats with representatives of the Regina Rifles, the RCMP, the Russell Legion, and French Consul Bruno Burnichon.

Lloyd Tibbatts, a veteran of the Second World War who fought with the Regina Rifles and the Royal Winnipeg Rifles, and who was part of the invasion force on D-Day, was honored with the government of Frances highest honor recently.

French Consul Bruno Burnichon travelled to Russell, Manitoba where Tibbatts, 97, now lives, to present the French Legion of Honorthe highest honor the government of France can give.

The government of France is seeking out veterans of the D-Day invasion force as it wants to decorate and thank Canadian military veterans for their role in liberating the country on D-Day, June 6, 1944.

He enlisted and served with the Winnipeg Rifles and then transferred to the Regina Rifles with the Canadian Infantry while in France in July of 1944.

Lloyd participated in Operation Overlord, landing at 7:45 am on the sixth of June, 1944.

He served in the liberation of France, Belgium, the Netherlands, and Germany, and was nominated for the French National Order of the Legion of Honour for his involvement in the landings at Normandy, France on June 6, 1944. Following his honourable discharge from the Canadian Infantry in 1946, Lloyd returned to his home at Foxwarren, Manitoba. 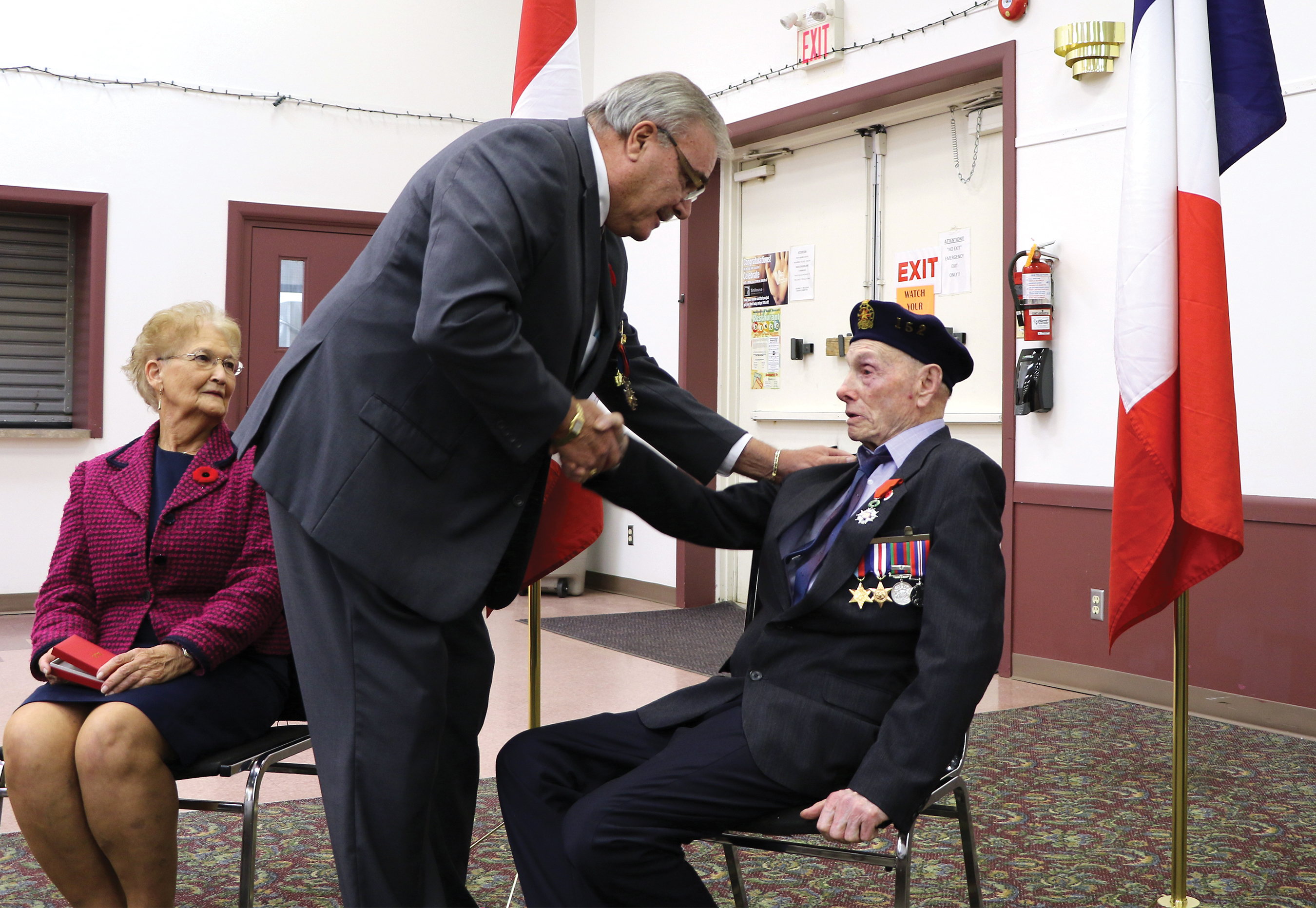 Tibbatts currently lives at the Russell and District Personal Care Home and each year he is very excited to attend the annual Remembrance Day Service.

Last week my wife and I, we were in Ottawa, we met with the Grand Chancellor of the Legion of Honor, five-star General Benoit Puga asked me to convey to Mr. Tibbatts on behalf of the French Legion of Honour his sincere congratulations and his sincere thanks, Burnichon said in making the presentation.

Today, is a notable day for everyone here, but especially for one special gentleman who in a few minutes will officially be made Knight of the French National Order of the Legion of Honour. It is a real honour for me to have the opportunity to present this prestigious award to Mr. Lloyd Clifford Tibbatts, acknowledging his participation of the D-Day landing in Normandy, France.

Approximately eight years ago, then Premier the honourable Greg Selinger travelled to Normandy and was greeted by the President of France at the time, Mr. François Hollande. It was to commemorate the anniversary of D-Day. The honourable Premier Brian Pallister did the same in 2019 and was greeted by our current President, Mr. Emmanuel Macron. Prior to that visit, the French government had decided to bestow the medal to the brave veterans from Canada who were on site during the D-Day operation and landing.

By the end of this undertaking, approximately 1,800 Canadian veterans will have and will receive this prestigious medal.

What is happening now is part of a truly unprecedented eight-year process. This undertaking requires a lot of human resources, both in France and Canada.

It would not have been possible without the outstanding support of the Canadian Ministry of Veterans Affairs. Let me specify that the President of France, Mr. François Hollande at the beginning of the program and now Mr. Emmanuel Macron the current President of France, have signed each and every one of the decrees for each Canadian recipient.

The Legion of Honour was created May of 1802 by Napolean Bonaparte. It is the highest honour awarded by the French Republic.

This honour is in recognition of outstanding achievement made while in service to the French Republic or other civilian or military capacity. This distinction illustrates the profound gratitude that France would like to express to Mr. Lloyd Clifford Tibbatts in recognition of your determination, your courage and professional contribution to the liberation of France, my country of birth.

Through you, France remembers the sacrifice of all your compatriots who came to help liberate France, often losing their lives during the field battles.

More than 50,000 unfortunately did not come home from D-Day. We are all together here today, and it is because of these brave soldiers and all of his comrades that freed my country, France, from the terror and tyranny.

They have demonstrated and accomplished an unsurpassable act of extreme bravery. Your role, Mr. Tibbatts, during the Second World War was a vibrant reminder of the profound and extreme friendship that binds France and Canada.

This creates a very special relationship between our two countries. The people of France have never, and will never, forget the act of bravery shown by the Canadian forces during the Normandy landing to help restore freedom. I can only think of one single word to say to you Mr. Tibbattsmerci! You are to France a true hero.

I have the very great honour of awarding to you the highest medal awarded by France. Please accept on behalf of the citizens of France, the President of France Mr. Emmanuel Macron and all other citizens, my sincere thanks, gratitude and congratulations.

As he made the presentation, Burnichon said In the name of the President of the Republic of France, Mr. Emmanuel Macron, and by virtue of the authority conveyed to me, I declare you Sir Lloyd Clifford Tibbatts, Knight of the Legion of Honour.

Tibbatts said he was very honored by the presentation. Its nice to be recognized like this, he said. This is a real honor. 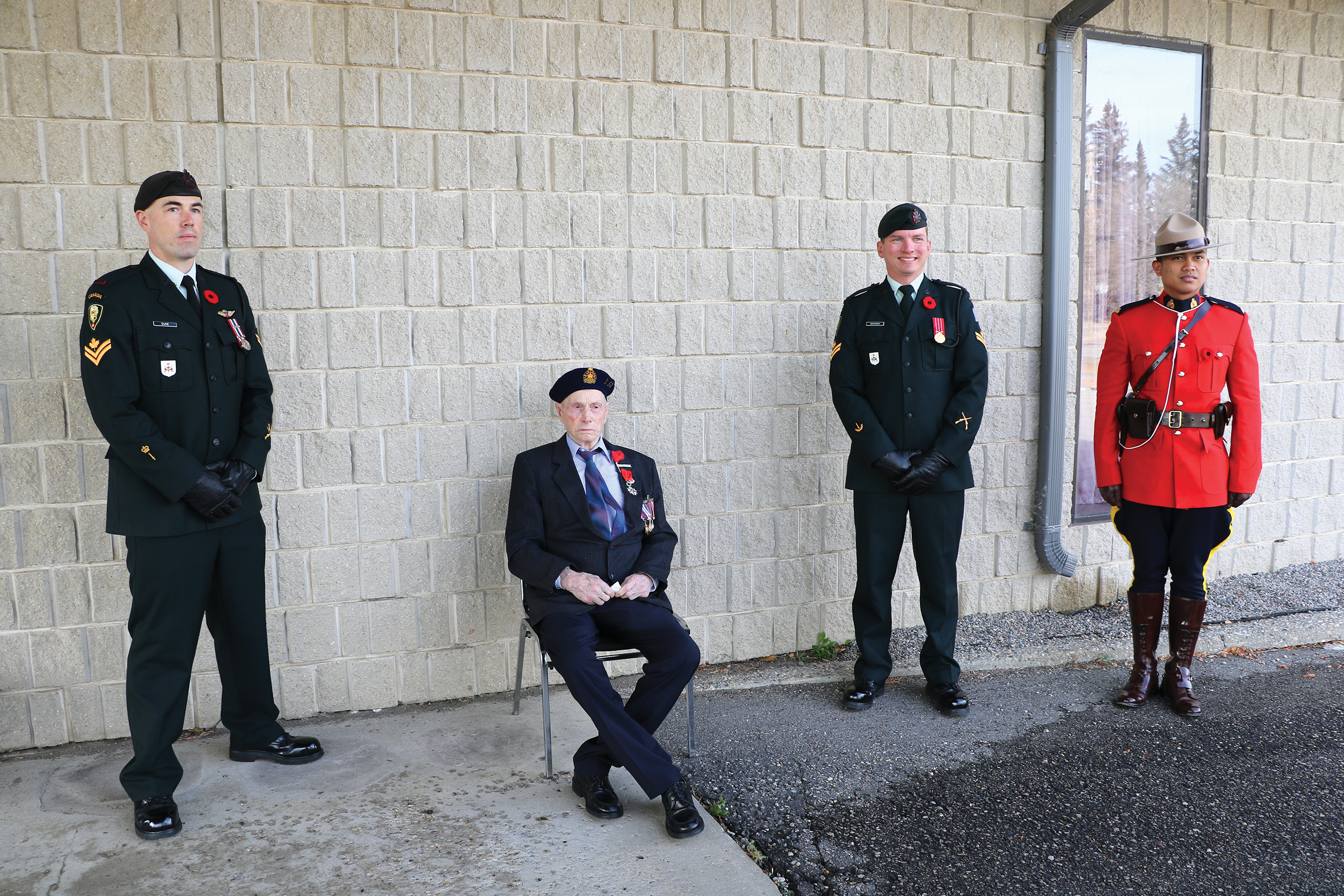 Lloyd Tibbats with members of his former unit, the Regina Rifles.