Wind farm to be developed south of Kipling 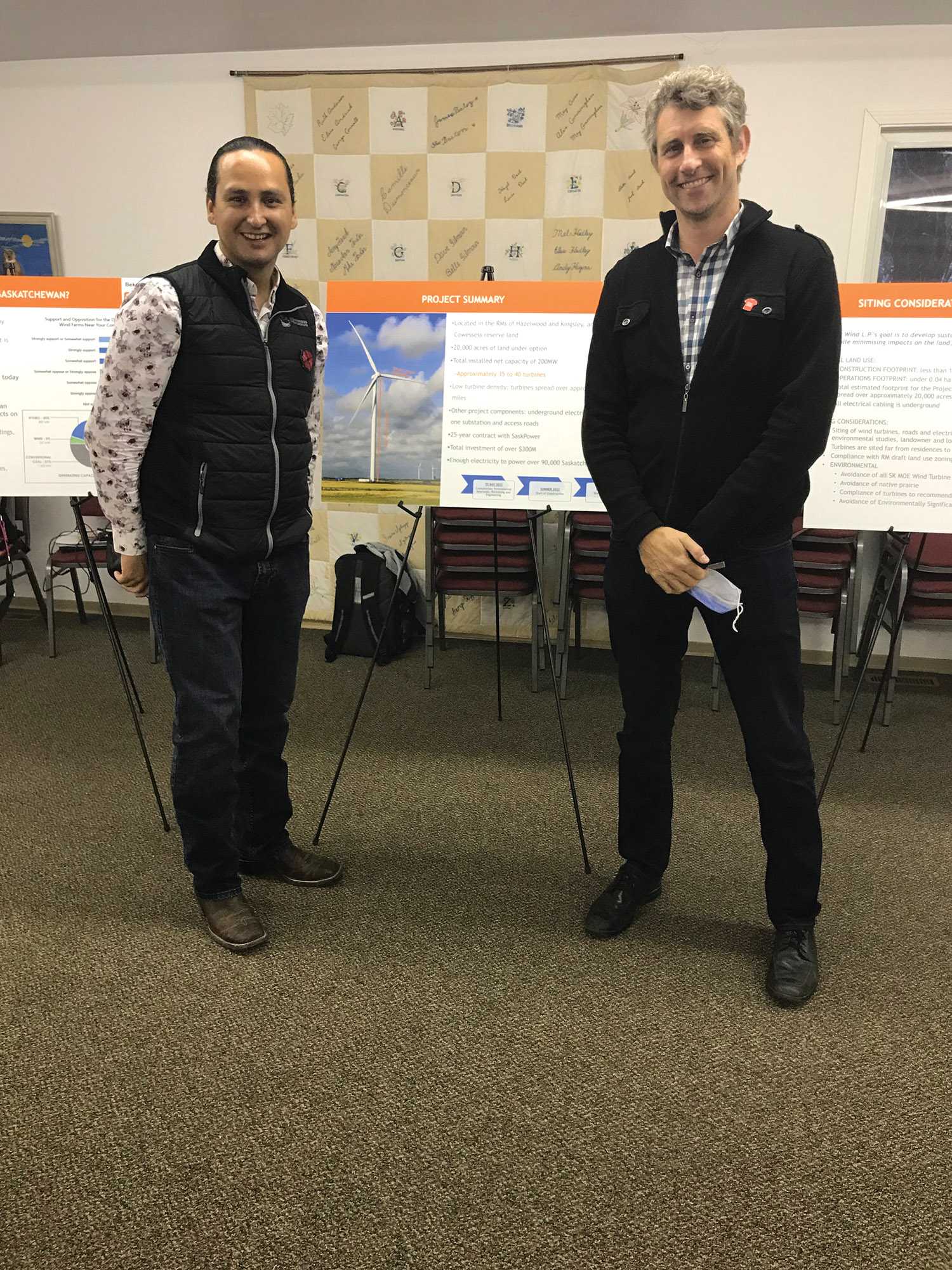 An open house was held in Kipling Wednesday for the Bekevar Wind Project, a 200 megawatt wind project that will be developed in the RMs of Hazelwood and Kingsley, south of Kipling and west of Kennedy, as well as on 500 acres of Cowessess First Nation land.

The project will consist of 30 to 40 wind turbines and will power about 90,000 Saskatchewan homes when completed in 2023.

Bekevar Wind LP has entered into a 25-year power purchase agreement with SaskPower.

Patrick Henn of Renewable Energy Systems Canada, which is the majority owner of the limited partnership developing the Bekevar project, said he was happy with how the open house went.

It was an okay turnout and there were a lot of new peoplenot just landowners who know the project already, he said.

There were all kinds of different questions. There are a lot of questions on how much power they produce and how big they are, how many turbines. There were questions about how much space a turbine will take. They want to know how much space youre taking up that wont be available for agriculture. Once weve built a turbine, it takes a tenth of an acre and you can farm around it.

Because there are wind farms at Moosomin and Grenfell, Henn says many people at the open house are familiar with wind farms.

Having other wind farms close by, people are familiar with it. Its not like theyve never seen a turbine before, which could have been the case 10 years ago, he said.

The Bekevar project signed a power purchase agreement with SaskPower in the spring of this year.

Under that power purchase agreement, Bekevars commitment is to have the facility in service by the end of 2023.

December 2023 is the target for the in-service date, says Henn.

Were pretty far along, weve done a lot of environmental studies on the site. Weve already done quite a bit of engineering. Its not fully done yet. Were working on that, and on getting our permits.

We are working toward breaking ground in the summer of 2022. This is a two-season build. We will start in 2022, take a break in the winter and install the turbines in 2023.

The project will create a large number of construction jobs.

This project will create about 150 full time equivalent jobs over the two years, said Henn.

In peak periods during construction you might have 150-200 workers. It also spans all sorts of different scopes of work. You have civil, building roads, installing cable, we need to build foundations, we need rebar, we need sand. Theres more of the specialized trades. We need to hire a company that has the big cranes that can put up a turbine, so well have to hire a company from somewhere else in Canada or even the U.S.

Locally theres a lot of work there and we have an important strategy in our company to hire locally. RES is a constructor. Im on the development side and my job is to develop these jobs and get it to construction. We have a construction arm, so we will bring in a few construction managers to oversee the project, but work like road building, cable install, foundations, materials, we try to source that locally. One reason we have events like the open house is to meet with local contractors or companies that might be involved in the construction.

Weve also asked the town of Kipling and the RMs about what companies there are in the area that could work on a project like this.

Work is still being done to finalize locations of the turbines.

Its close to final but not finalized, says Henn. Were still looking at a bit of micrositing. A project like this has all these turbines that are all interdependent on each other. To maximize the wind you have to space them out in a certain way so youre producing as much power as possible.

Were doing geotechnical studies in the next couple of weeks and that might inform us a little bit more on ground conditions and we will see if we need to move some around a bit.

The area is nailed down. We have 20,000 acres of land signed up and thats where the turbines are going. For exact locations were close to final but we will have to work through detailed engineering during the winter and have more site visits and some consultations with the landowners themselves.

The next step is were going to walk the fields with the landowners one by one, and look at the exact positions, and we might do a bit more micrositing.

Cowessess First Nation is involved in the project both as a landowner and as an equity investor in the limited partnership developing the wind farm.

What are the next steps in the project?

The land is nailed down. We have all the land for the project. Now its just a matter of getting the permits from the ministry of the environment, and because we have the Cowessess lands we also need approval from Indigenous Services Canada. We have to do the environmental assessment and get the permits from those two entities. We also need to get the development permits from the RMs. So theres a lot of permitting to do by next spring, and through that process, the detailed engineering will be done and we will have details on things like exactly how much aggregate we need, and rebar and concrete, and get those plans finalized over the winter. Then there will be final consultations with the landowners who will have the turbines or cable or roads on their land.

Then we sign the ground leases with the landowners. Each is very small, about an acre when you include the footprint of the road plus the turbine, but the turbine itself is about a tenth of an acre.

Whats the toughest part of developing a project like this?

The challenge is to have the combination of all the right elements so you can have a winning site and get that contract from SaskPower, says Henn.

There are a lot of developers out there. We were competing with 18 other companies for this contract and they probably had one or two projects each, and SaskPower selects just one project, and this time around we were the one.

The most challenging is to pick the right site that has the combination of good winds, a good interconnection with SaskPower. In this case we have the Kennedy switching station. Then the third part, which is the base of a project like this, is local support from the rural municipalities, and landowners who want to participate and partner with us. The challenge is to find that sweet spot where you have all three of those pillars for a successful project.