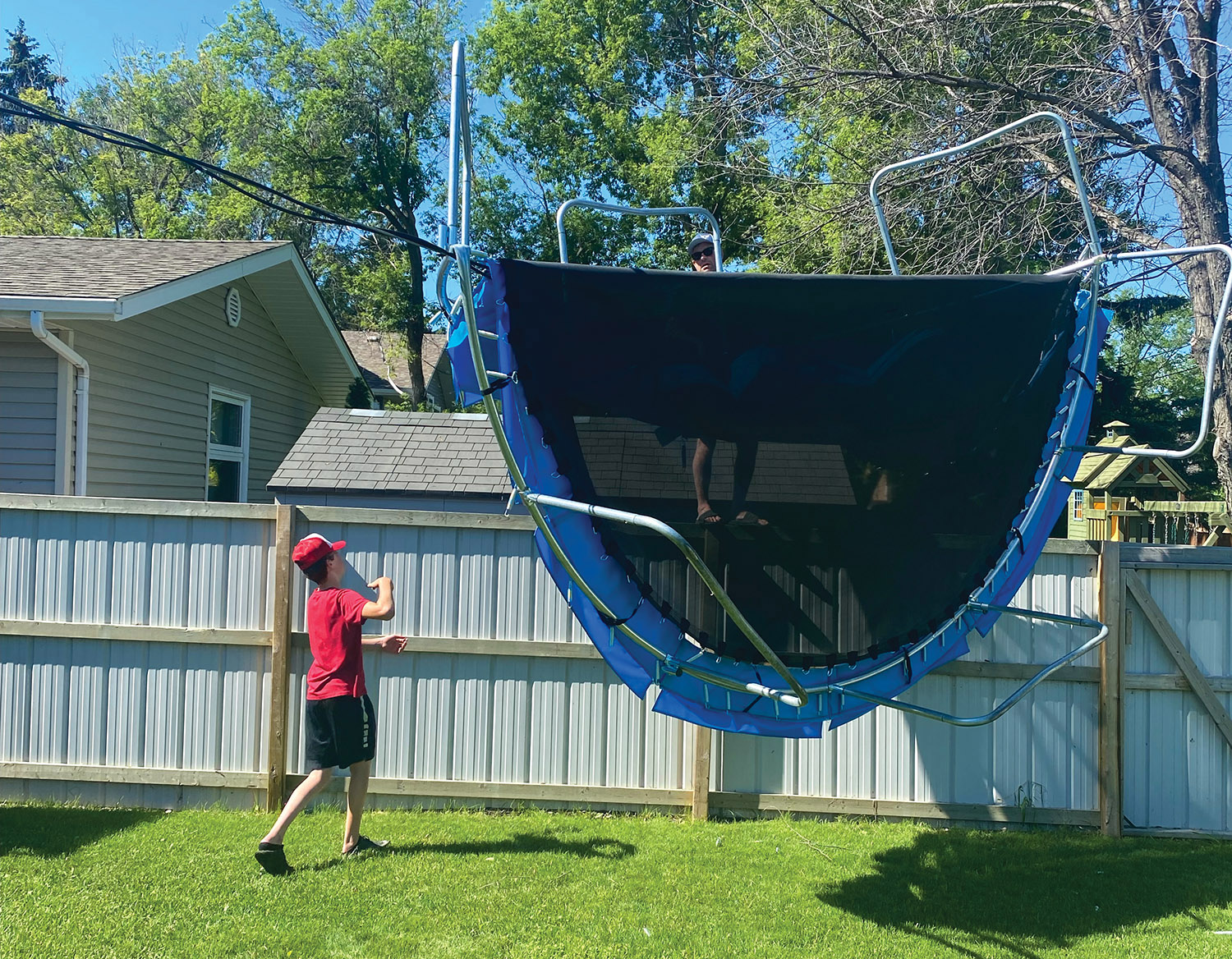 A trampoline is folded over a power line in Moosomin.

A massive windstorm hit southeast Saskatchewan July 15, leaving a path of destruction in its wake.

The most serious direct damage from the storm was in the Grenfell, Wapella and Moosomin areas, while the Rocanville and Welwyn areas were most affected by the power outage, which stretched from around midnight Friday night to noon on Monday in those two communities.

At Grenfell, one of the steel bins at the Viterra terminal was twisted, and bins in the terminal yard were scattered. The loading area at the Paterson elevator between the elevator and the office is gone, with pieces scattered over two blocks. A travel trailer was demolished by the wind on one side of Grenfell and a semi was overturned on the other side. The roof was ripped off the communitys rink.

At Wapella there was extensive damage from downed trees, including trees falling on vehicles and buildings.

At Moosomin the wind peeled parts of the metal roof off the Subway strip mall, pulled the steel off the front of the town public works building, knocked down trees around town, some of which landed on vehicles, and knocked down signs and fences around town.

There was a path six miles north of town where several farms and a feedlot were hard hit by the storm. Steel bins were damaged on farms, and some agricultural buildings were destroyed. After the storm, a steel bale feeder was resting against a fence at TC Energy.

Moosomin Mayor Larry Tomlinson said the town crew was working on storm cleanup starting at 3 am Saturday, when they worked on removing some large trees that had fallen at the South Cemetery and were blocking Highway 8.

The crew was really busy trying to get things cleaned up, and at the same time we had two water breaks, said Tomlinson. There was one on Main and one on Ogilvie. The one on Ogilvie was after the power came back on, I think from the force of the pumps coming on.

Because there was no power we couldnt pump the water up to the water tower, said Tomllinson. We had no power, and we have an engine in there that works on propane, but it blew up, so we had to get a generator. Its self-fed from the tower down, but the problem was to get it up there. It was critical there for a while, the tower was going down and we had no way to get water up there. Right now were using 300,000 gallons a day, so it doesnt take long to take it down. We figured we had enough for another day, but if the power hadnt come back on we would have been in trouble.

Public works is still cleaning up. The crew is doing a really good job. Theyll be working on it all of this week and into next.

The storm had a surprising impact on some businesses. Restaurants in Moosomin were bursting at the seams Saturday and Sunday as people from the Rocanville and Welwyn areas, which were without power for the entire weekend, headed to the restaurants both for food and for the relief of air conditioning.

Morgan Kerr of Moosomin DQ said Saturday and Sunday were the two busiest days the business has ever had.

The power outages were caused by damage to downed lines and broken structures because of wind and fallen trees. 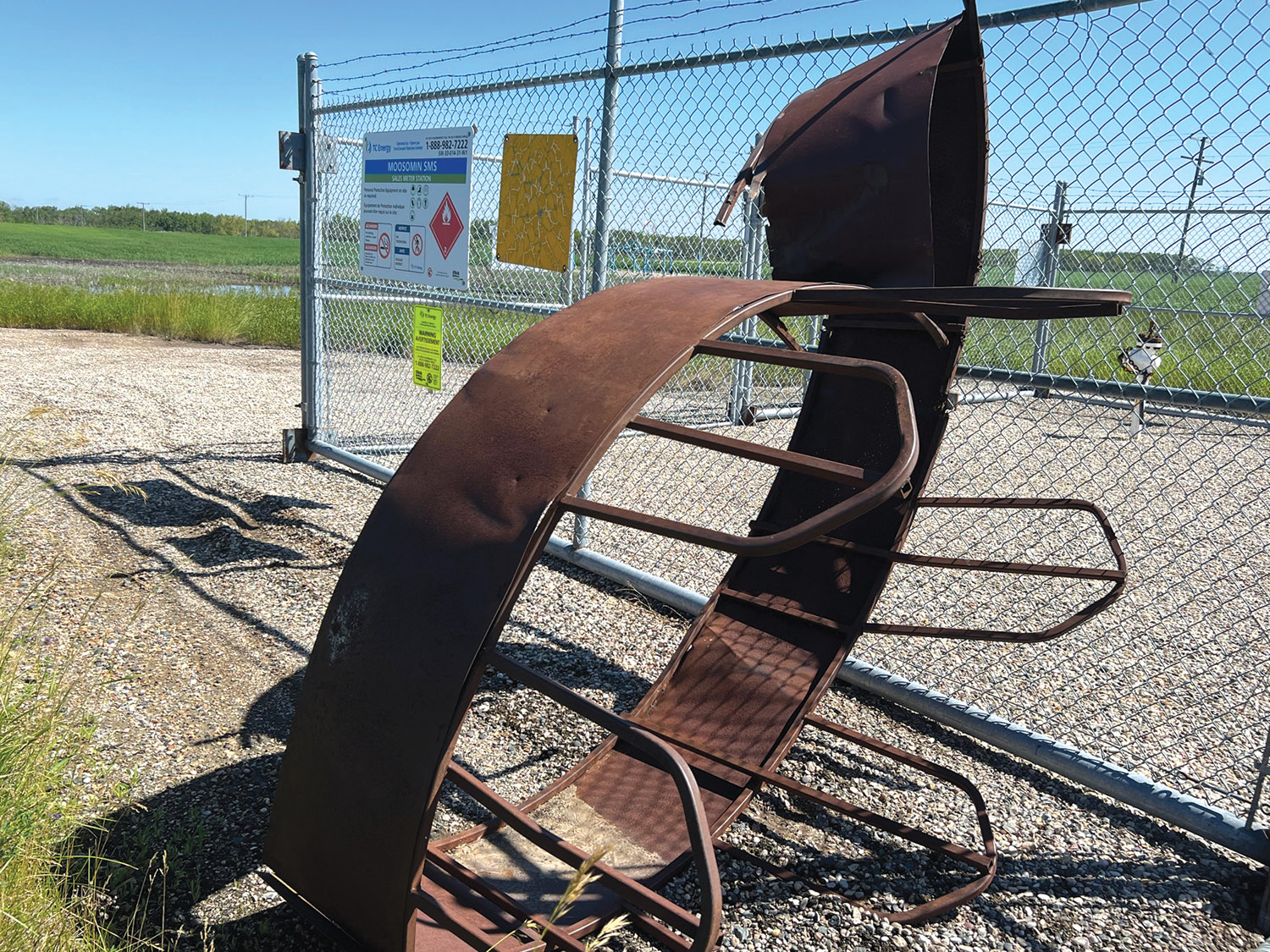 A bale feeder mashed against a fence on Highway 8 north of Moosomin.