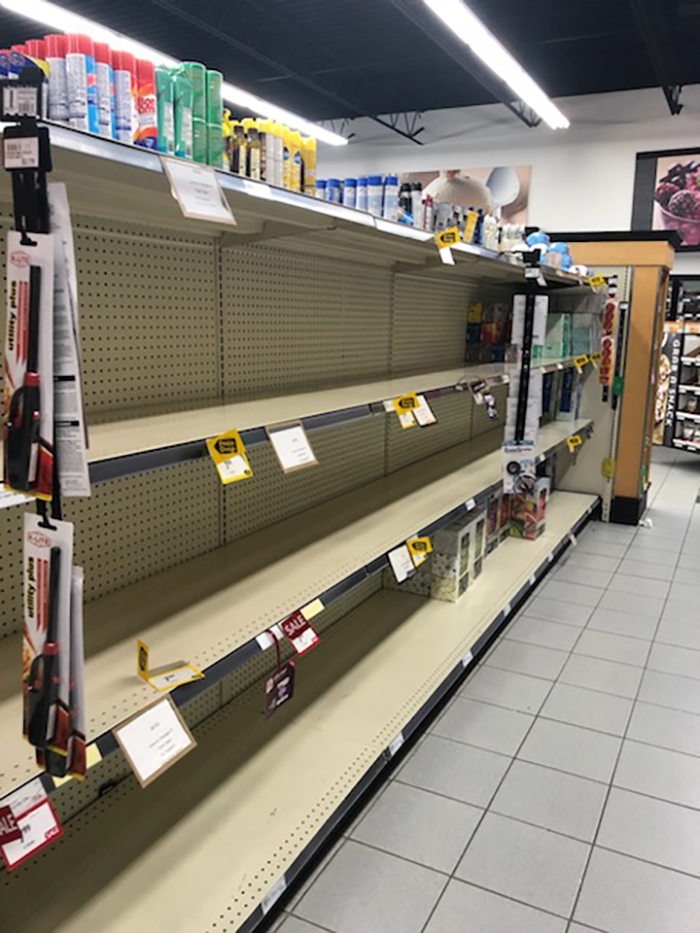 The hysteria around the spread of COVID-19 in Canada continues to grow as the number of confirmed cases and deaths related to the virus continue to rise.

Saskatchewan, Ontario, Alberta, and British Columbia have declared states of emergency while Canada has shut its border to non-essential travel.

The panic has been reflected by the state of grocery stores across Canada, empty shelves, lines out the door, and people hoarding certain products as they prepare for long-term quarantine.

Stores have had to implement systems to limit certain products sales to customers to ensure theres enough for everybody and adding special shopping hours for seniors, the disabled, and more susceptible people.

Premiers across Canada have addressed the hoarding of products including Saskatchewan Premier Scott Moe.

We dont believe coronavirus will cause shortages in our grocery stores. But hoarding most certainly will, said Moe. We need to remain calm.

Buy what you need. There is no need for us to hoard. So dont do it.

Remember your neighbours, those people who buy just in time. Buy what you need. Be kind to one another, said Hajdu.

Borderland Co-op locations will be dedicating some hours to those who need it most.

All Borderland Co-op Food Stores will be opening one hour earlier on Tuesdays and Thursdays (8 a.m. to 9 a.m) to accommodate seniors (ages 65+), those with mobility concerns, and vulnerable members of the community.

Borderland Co-op Food Stores will also be providing a delivery option if customers call their local store before 2 p.m. and they will accept a cheque from members, or cash.

Borderland Co-op General Manager Jason Schenn says although there is hoarding going on, its not something hes too worried about going forward.

Were doing our best to keep product on the shelves and in the store, said Schenn.

Even with the rapidness of the situation, Schenn says despite it being tougher than normal, his locations are doing as well as they can given the circumstances.

In all of our sites were generally well prepared and well stocked for any member that might need something at any time, said Schenn. Situations like this are a little more of a challenge.

The pandemic itself is a concern because of public safety, but in terms of big picture things I think were as prepared as we can ever be for the situation.

Schenn says theyre trying their best to keep up with demand during these times.

For the most part we buy what we can, when we can, said Schenn. Hopefully we can keep enough products on the shelves to keep everyone satisfied.

This has bigger ramifications than just us picking up a phone and making a phone call and ordering product and it arrives.

You start having the panic buying thats been happening globally so its creating supply issues along the supply chain, said Schenn.

There are some products that start going into allocation or that you just dont get at all.

With potential hoarding of products going on, Schenn wants customers to understand theres enough to go around as long as they dont panic buy and stockpile.

You have your first run of people that are your panic buyers that are buying strictly on the impulse of the panic thats created right now, said Schenn.

Then youve got the next wave of people who are making sure they dont run out too because of the people motivated by the panic and they go out and buy even though they feel silly about it.

Then you have the other people who are just not buying into the panic and theyre going to be on their regular shopping patterns.

Even though its a stressful time for shoppers, they need to buy appropriate amounts of product so theres enough for others during an urgent time.

Youve got some people who are trying to stockpile a years supply of toilet paper or sanitizers, any of those kind of items, said Schenn.

Were going through everything we can, we had to go to allocation and say, you know what we cant have one person buying a years supply of toilet paper when someone else is going to have none.

Even with the panic buying so far, Schenn thinks its starting to tail off and he hasnt had to make too many adjustments because of it.

You anticipate once the panic starts theres going to be a rise in demand and then not too long following it will peak and come back down to regular levels, said Schenn.

I think most of the panic buying is starting to come to an end, said Schenn. We havent had to make any major changes, the worst weve done is had to put a limit of two on things like toilet paper. Thats about as far as weve had to go.

Schenn just hopes people grasp the impact that panic buying can have during a severe situation in Canada.

Ive seen it before in other products, but its a little different because its a global pandemic and that hasnt happened on this scale before so everybody is learning as we go through this.