Casey was former journalist working in public affairs for Snowbirds 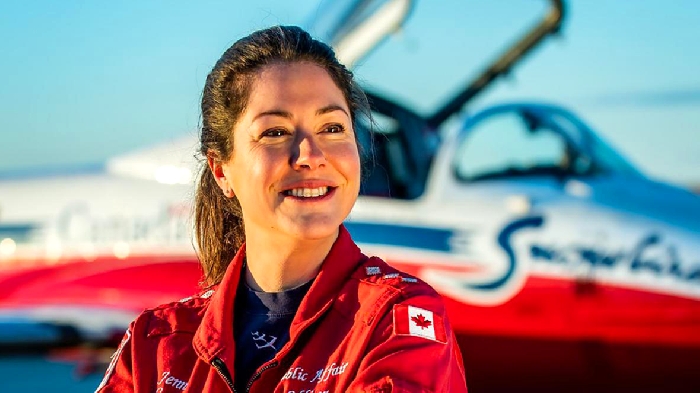 Captain Jenn Casey, who died Sunday in a Snowbirds plane crash at Kamloops, was a former journalist who joined the Canadian Forces as a public affairs officer.

Casey grew up in Halifax, earning her Bachelor of Arts degree at Dalhousie University and attending journalism school at the University of King's College.

Prior to joining the Canadian Armed Forces, she was a journalist in Halifax, working as a reporter, an anchor and as a producer for The Rick Howe Show.

According to her online profile with the Royal Canadian Air Force, Casey joined the RCAF in 2014 and has been with the Snowbirds since November 2018.

Global News published an interview with an Albertan airshow producer who remembers Casey as a positive person with a passion for the industry. Sarah Van Gilst with Wings Over Springbank Airshow said she knew Casey for about three years, describing her as sunshine in an interview with Global News.

She was a really joyful person to be around, she said with her voice breaking. She was very efficient at her job and had a real passion for the industry. So she kind of got what we always call the air show bug, Van Gilst said, noting that she expected to see Casey involved for many years to come.

Once you get involved in this industry, it tends to grab hold of your heartstrings.

We tend to know each other for a lot of years. Colleagues become friends and friends become family, so its hitting us all very personally right now, she said.

Casey joined the RCAF in 2014 and the Snowbirds in 2018. Before that, she worked as a radio reporter, producer and anchor, according to her biography.

Beyond just sort of the [Snowbirds] demonstration team being the teamwork that they are, safety is so important for them. So with something like this happening, its really shocking just to think that it could happen this way, she said.

The Canadian Forces Snowbirds were on Operation Inspiration, a cross-country tour to lift the spirits of Canadians and salute front-line workers during the COVID-19 pandemic, according to the Department of National Defence.

Theyre going out there to try and bring some joy and some excitement to people. Its certainly shaken a lot of us, Van Gilst said.

In a statement released Sunday, Lieutenant General Al Meinzinger, Commander with the Royal Canadian Air Force says we have suffered another tragic loss of a dedicated member of the RCAF team and snowbirds. We grieve alongside Jenns family, friends and colleagues and are deeply saddened. Our thoughts also go out to the loved ones of Captain Richard MacDougall. We hope for a swift recovery from his injuries.

The Prime Minister of Canada also tweeted his condolences. Tonight, I join all Canadians in mourning the loss of a member of the @CFSnowbirds #OpInspiration team, Captain Jennifer Casey. Im sending my deepest condolences to her loved ones, and wishing Captain Richard MacDougall a full recovery.


Snowbirds based in Moose Jaw

The Canadian Forces Snowbirds team is based in Moose Jaw. The Tutor jet they fly was brought on line in 1963 and was initially used as the training jet for the Royal Canadian Air Force.

The Snowbirds were on a national tour to raise spirits in the face of COVID-19, and to show their support for frontline workers. They did a flypast in Moosomin last Tuesday.

They started Operation Inspiration in Nova Scotia, where Captain Casey is from, in part because of the recent tragedy involving a Royal Canadian Air Force helicopter going down off the coast of Greece during NATO exercises killing the six crew members on board. Only one body was recovered in that tragedy and it was that of Sub-Lt Abbigail Cowbrough who was also from Nova Scotia.