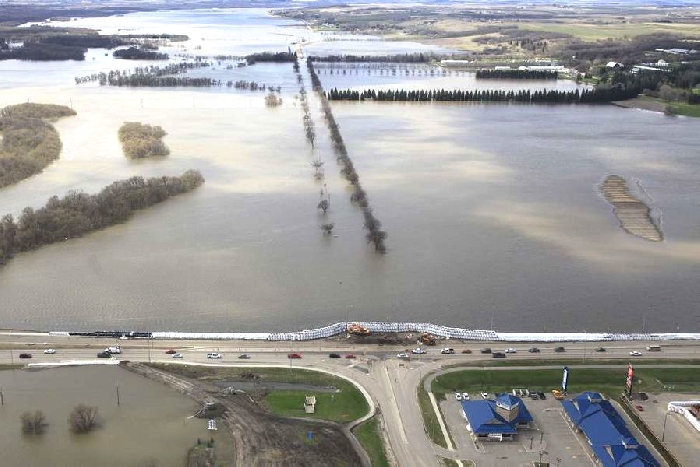 Manitoba Infrastructures Hydrologic Forecast Centre is issuing a flood warning and high water advisory for the southwest, western and central regions of Manitoba.

A weather system passing through Manitoba watersheds has brought significant precipitation in the past 24 hours.

The Assiniboine River watershed, including areas near Brandon and Minnedosa, has recorded close to 155 millimetres of precipitation in the past 24 hours.

Another forecast weather system could bring an additional 80 to 150 mm of precipitation in southwest and western Manitoba, and in eastern Saskatchewan over the next 48 hours. The Assiniboine, QuAppelle and Souris rivers and their tributaries could be affected.

Overland flooding is being reported from areas across the Assiniboine River watershed. A number of smaller rivers, including the Little Saskatchewan River, are above flood stage and low-lying land near the river is affected. The forecast precipitation could create more overland flooding in southwest and western Manitoba.

Flooding of low-lying areas is expected for most portions of the Assiniboine River and its tributaries. However, water levels are expected to remain below flood protection levels at most locations along the Assiniboine and Souris rivers.

Operation of the Portage Diversion may be required later this week to limit flows in the lower Assiniboine River to 10,000 cubic feet per second.

The Shellmouth Reservoir is expected to handle the potential inflow increase due to the forecast precipitation system.

Property owners are advised to take precautions as water levels could quickly rise significantly in these areas.