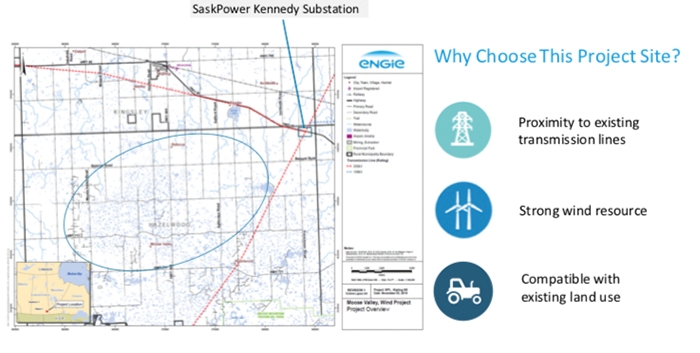 ENGIE will be submitting a proposal for a wind project to be developed in the RM of Hazelwood. Below are the local benefits of a wind project in the area.

The project will be submitted in response to SaskPowers current 2020 Wind request for proposals for new wind generation capacitysubmissions are due in November. The Moose Valley Wind Project will generate enough electricity to power approximately 50,000 homes.

ENGIE Canada Inc. has been actively participating and investing in the Canadian energy sector for over two decades with 680 megawatts of renewable electricity generating facilities across Canada.

This site was chosen by ENGIE because it checks three major boxes with its proximity to existing transmission lines, a strong wind resource, and compatibility with existing land use.

ENGIE will be responsible for the permitting and construction of the project and associated substation. The substation will connect to nearby SaskPower 230 kV line or directly to SaskPowers Kennedy substation.
The specific turbine locations and electrical line routing have not been finalized yet. The layout will be finalized once SaskPower awards the contract and environmental field surveys are completed.

Right now theres 240 megawatts of installed wind capacity (in Saskatchewan), said Project Development Manager Jon Fournier. Whats driving a lot of this is Saskatchewans target in reduction of electricity sector emissions of 40 per cent by 2030. That, combined with a requirement from the federal government to phase out most of the coal generation fleet by 2030.

Saskatchewan has world-class wind resource and wind energy will be important and a cost effective way of meeting that target. In 2018, SaskPower ran one of their first procurements in seven or eight years for 200 megawatts. They indicated the final electricity price was less than 4.2 cents per kilowatt an hour which is very cost effective electricity.

Having a competitive request for proposals process with independent power producers combined with world class wind resource will ensure low cost electricity generation and motivate the province to maybe try to exceed their greenhouse gas targets because it makes economic sense, he said.

The current request for proposals at SaskPower is running for 300 megawatts of wind generation. Each project can be between 50 and 200 megawatts and bidders are able to submit up to six proposalsfrom one site or several sites. Proposals are due November 10 and the project would be operational by December 1, 2023. 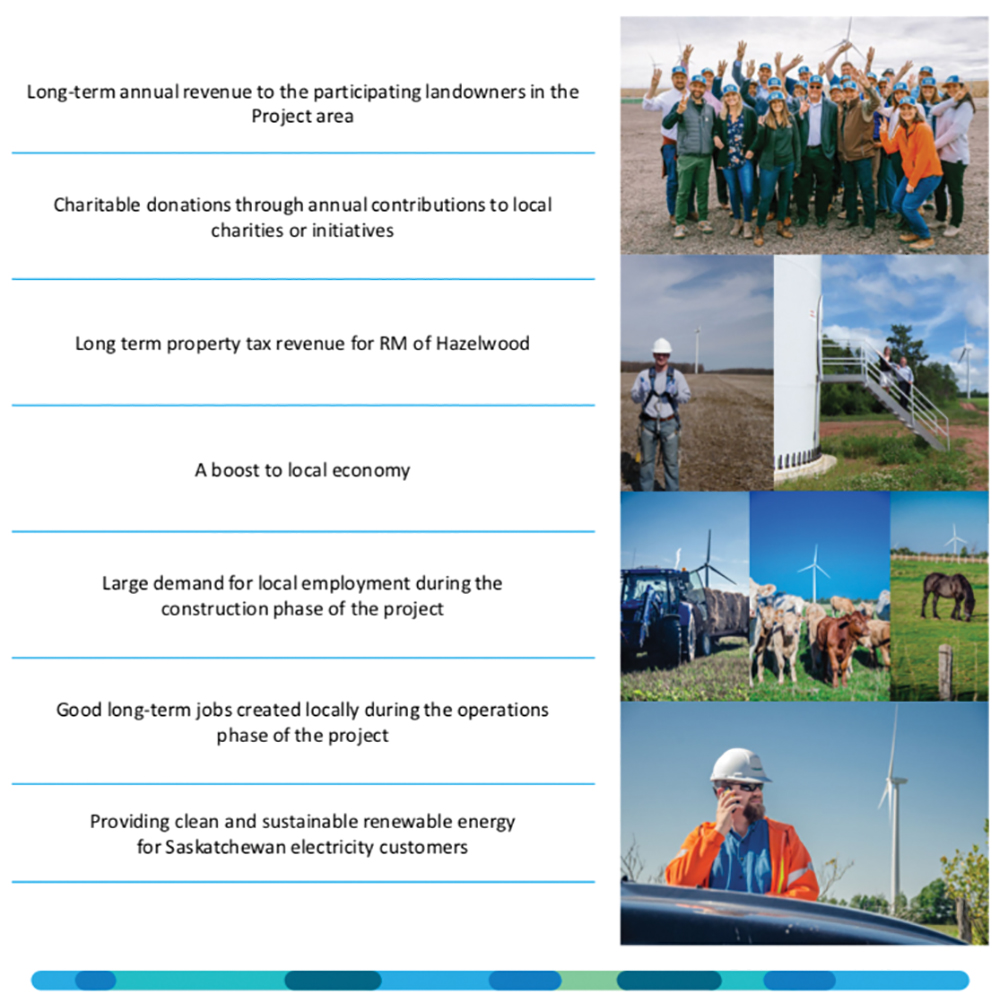 Before ENGIE builds a wind project they conduct field studies to assess any potential impacts and to understand how they can be avoided or minimized. ENGIE has completed spring and summer environmental field surveys and has initiated the fall field survey.

The project is being designed to avoid native prairie habitat and minimize impacts to the environment and heritage resources. ENGIE is developing the project in full compliance with the requirements of the Wildlife Siting Guidelines for Saskatchewan Wind Energy Projects.

The environmental survey results thus far have indicated that the proposed projects area is favourable for wind energy development. Results of all environmental studies will be used to design the project layout to avoid or minimize impacts to the environment.

With the environmental studies, you start with some desktop level work looking at information, Fournier said. Theres a HABISask tool in Saskatchewan that gives you some information, you look at aerial photos, and eventually you hire biologists to go out in the field and do various field surveys so you can understand what species use the area and if any of the species are sensitive and require setbacks. You understand if theres wetlands or native prairie grasslands in the area. You build up this body of knowledge about the site and then that feeds into the wind farm designs.

We met with the rural municipality and got an understanding of their zoning bylaws and what setbacks need to be applied to property lines or roads or residences. You know what environmental features are on a site and if theres any associated setbacks to those. You know if theres any airports around or telecommunication towers that you may need to be concerned with. That gives you the information to design the wind farm. You know what you need to stay away from and what area of land you can work within.

Then we take the data from the meteorological towers and put that into a computer model that takes into consideration the terrain variability and the various setbacks and constraints (from the environment), he said. We look at different turbine models and see where we can locate them and which model is the most cost effective for the area.

Then we know how many megawatts and turbines we can fit on the area, how much energy we can produce, and how much it will cost to purchase the turbines and build the project. That all feeds into a financial analysis model where we can calculate what our proposal bid price would be to SaskPower.

Thats the main component of our submission. After were hopefully awarded a contact under one of these procurements you get into the heavy permitting process. Thats environmental approval from the Saskatchewan Ministry of Environment, your development application with the RM, and a variety of other more minor permits.

ENGIE says its committed to meaningful engagement with all local stakeholders. Its been reaching out to engage with the RM of Hazelwood, residents, landowners, First Nations and Métis communities, the Ministry of Environment, NavCanada, Transport Canada, and other stakeholders near the project area to gather input.

ENGIE encourages stakeholders to participate throughout the process and contact them with any questions or concerns. ENGIE can be contacted at 877-246-7697 or 647-822-0230.
Tweet