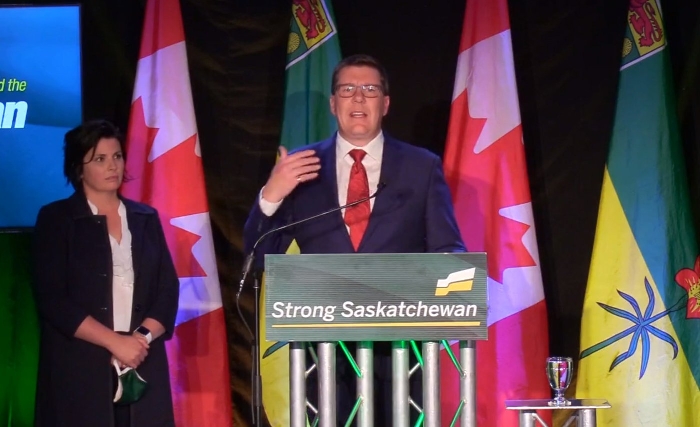 They couldnt fill halls, they couldnt shake hands. But at the end of the campaign, both the NDP and then the Saskatchewan Party figured out they could have drive-in rallies and honk. The Saskatchewan Party called each of theirs a Big Honkin Rally, and now the party could celebrate a big honkin win on Oct. 26, taking 50 of 61 seats and 63 per cent of the popular vote.

Premier-elect Scott Moe started his victory speech saying, Last week we had a couple of big honkin rallies for a strong Saskatchewan, and tonight we're celebrating a big honkin election.

There wasnt a big honkin crowd in the Saskatoon hotel meeting room, however. With COVID-19 pandemic restrictions limiting gatherings to just 30, Moe was principally speaking to the cameras. There was no applause, no cheers, and no laughs at his jokes. The room was mostly empty. As he walked off stage, there was silence; surely a first for a victory speech in a Saskatchewan general election.

With a win of his own under his belt nearly identical in scale to those of his predecessor, Brad Wall, in terms of both popular vote and seat count, Scott Moe solidified his place as leader.

Moe said, I want to start by thanking the people of Saskatchewan. For a fourth time you have placed your trust with the Saskatchewan Party. You've given us a great responsibility. And we take that responsibility very seriously. We are humbled by the task that lies before us, and we are ready to go to work on your behalf. We are eager to build a strong economy, strong communities, strong families, and a strong Saskatchewan for everyone, for everyone in this green province.

This has been an election, like no other, in our lifetime, Moe said, thanking Elections Saskatchewan, the candidates and volunteers of all parties in dealing with the complexities of a campaign during a pandemic.

Moe noted that several candidates wouldnt know for several days if they were elected or not, due to the high number of mail-in ballots still waiting to be counted. He said, I know it's nerve racking waiting for just a few hours for those results, and I can't imagine what it's going to be like waiting for a couple of days, but I guess it that is the way it's going to be. And it's going to work in this year's very unusual circumstances.

Indeed, several races were so close, it wasnt until much later in the evening that the Sask. Party picked up several more additional seats, including that of NDP Leader Ryan Meili.

Moe said, Tonight I would give you my word that we will be a government for all of the people, whether you support us get the Saskatchewan party or whether your support laid with a different party. We will govern for all. And we will work to build a strong Saskatchewan, for all of us.

Moe congratulated his principle opponent, NDP Leader Ryan Meili, on running a very strong campaign. We obviously have our differences when it comes to policy, but I have never doubted Mr. Meili's love for this province. I've never disputed his commitment to making Saskatchewan a better place to live.

Moe thanked his family, noting his children are why he ran for office in the first place.

I want my children, I want your children, to have the chance to build a career and to start a family and to build a good life right here in the province of Saskatchewan. That's what motivates the Saskatchewan Party more than anything else, and that's why I get out of bed each and every morning, building a strong Saskatchewan.

Moe said the last few months have been difficult as the province has dealt with the pandemic.

But we're coming through this better than most places in the nation. Thanks to what all of you are doing. Each of you are doing to control the spread of this virus. Today, most of our economy is open in this province, he said.

He referred to campaign promises of cutting SaskPower bills by 10 per cent for a year, a home renovation tax credit, reducing business taxes, scholarships, support for seniors and people with autism, diabetes and disabilities.

As we manage through this ongoing pandemic together, it's the balance of keeping Saskatchewan people safe while at the same time keeping our economy strong and preserving the jobs in our province. Saskatchewan has already shown that we know how to find that right balance. We can protect lives and livelihoods, and we can do it at the same time, he said.

Moe became most animated when obliquely referring to the performance of the upstart Buffalo Party, but he did so without naming them. The Buffalo Party came from nowhere to garner a distant third place in the popular vote, with 11,055 votes as of late Monday night.

Moe said, There was a number of voters, many of them in rural constituencies, that used their vote this election to express their frustration with the federal government. And to those voters I want to say, I hear you. I want to say, This government hears you.

We share your frustrations, and we share many of your objectives. We are not happy with the federal government either. And you have my word that we will continue to stand up for Saskatchewan, as we have always done.

He pointed out the Saskatchewan Partys fight against the federal carbon tax, Bill C-69, the no more pipelines bill, and C-48, the no more tankers bill. Agriculture, energy, mining and manufacturing drive growth in Saskatchewan, and allow the province to invest in schools and hospitals, he said.

We will stand up for Saskatchewan, because there is simply so much at stake in this province.

Moe concluded, We can build a strong growing and vibrant Saskatchewan. Thank you so very much for the trust that you placed in us. We will work each and every day to ensure that we are worthy of that trust, and to be worthy of the honor of governing the great province of Saskatchewan.