Proponents happy with response from investors 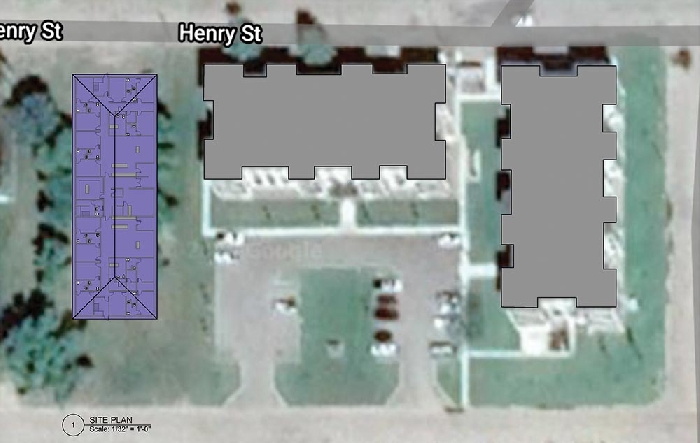 The site plan for the new Long-Term Care/Assisted Living Facility planned for Moosomin. It will be located on Wright Road next to Pipestone Villas

The proponents behind the long-term care and assisted living facility proposed for Moosomin are happy with the results of a series of initial investor meetings in Moosomin last week, and are planning Zoom meetings and in-person meetings in February to speak with more potential investors.

The cost to build the three-storey facility, which would be located next to Pipestone Villas, will be about $7.5 million. Some of that will be financed, and $3 million will be raised from investors.

Larry Scammell of Kohr Capital said he is optimistic about raising the $3 million.

I have no doubt that we can raise that from investors, he said. Further to that, I would not be surprised if 100 per cent of required capital comes from the community, from the people we saw in and around Moosomin the last couple of days.

I would not be surprised, and I think its everybodys goal, or wish, or dream for that to be the case, but Im very confident that it will. But even if it doesnt, I would be shocked if its any more than five or ten per cent that doesnt come directly from the community. We do have investors outside the community who would be looking at an opportunity like this, but I think they will play a minor role if any.

Scammell said he is very impressed by the way the community has responded to the proposal.

Across all of the communities that we are going to be going into, I would say Moosomin as a community has absolutely set the bar extremely high in terms of engagement and support, he said. And Id be surprised, if not shocked, to see other communities respond to the level that Moosomin has.

The engagement was almost overwhelming. All things considered, Covid-19 restrictions, we saw just over 70 people, and they had some great questions. It was an overwhelming response in terms of people letting us know the community needs this, and they were happy to have an opportunity to hear about it and to consider participating.

The proposal for the Moosomin project involves three companiesBridge Road Developments, which originally developed Pipestone Villas and many similar independent living projects across Western Canada, Care by Design, which is an operator of assisted living facilities in Saskatchewan, and Kohr Capital, which is handling the investment end of the project.

Across all of the communities that we are going to be going into, I would say Moosomin as a community has absolutely set the bar extremely high in terms of engagement and support. And Id be surprised, if not shocked, to see if other communities can respond to the level that Moosomin has.

So what are the next steps?

There are three componentsthe investor standpoint, the design and construction standpoint, and the care component, which will become more engaged a little later in the process, says Scammell. The next two steps will be to follow-up individually with every single person that expressed an interest. We will go through all the details relating to how a person can get involved and invest to support the project, with a view to the first closing, which were anticipating will happen in March. That will be just a portion, probably about 15 per cent of the total equity required will come in, in March.

Its about $500,000, which will be working capital to really engage the project and get the wheels turning. Were also at the same time looking to capture and solidify interest in investment in the balance of the financing. Which is going to happen somewhere between August and October. So the second need for capital, or the second need for investment, is going to happen in concert with construction starting. So again, we anticipate between August and October we would be needing to close on the balance of the equity. 

What was the main message of the meetings?

From Kohrs standpoint, what we really tried to stress to everybody who was there is we exist as sort of a middle man to bring compliance to the transaction and we represent the investors best interests, said Scammell.
From a team standpoint we tried to stress and promote confidence in the collective ability to bring this project to reality. Its a three legged stool and its a pretty solid one because Bridge Road, they have demonstrated in this very community for 10 years, they know what theyre doing on the construction side.
Shane and I at Kohr, based on our experience raising capital and putting investment structures like this together, same thing, this is the seventh mutual fund trust that weve worked with.
Care by Design, the simple fact is, theyre the largest independent care home operator in the province with 550 beds. The three of us together can bring this project together.

Zoom meetings and additional in-person meetings are being planned for February to connect with more potential investors.
Information on how to participate in the Zoom meetings will be included in next weeks World-Spectator, once details are finalized. People who want to find out more about the opportunity can contact Larry Scammell at larry@kohrcapital.com