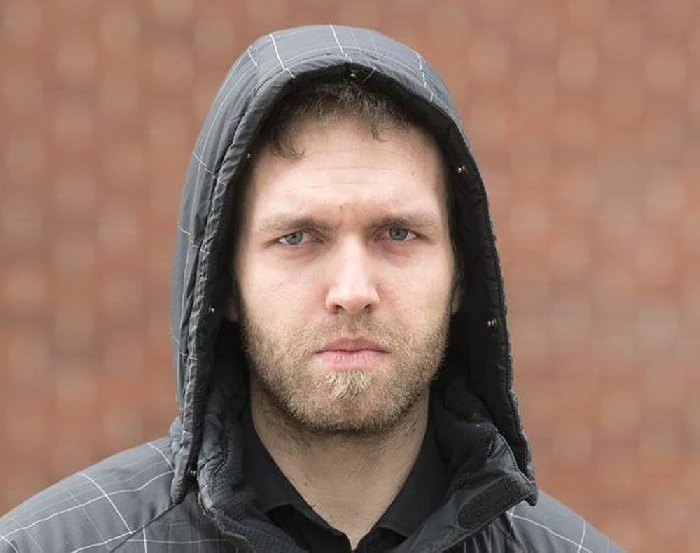 Travis Patron following a court appearance on charges of Aggravated Assault and Assault Causing Bodily Harm. Patron now faces a new charge of promoting hatred as the result of an anti-semitic video he posted.

Travis Patron of Redvers has been charged with a hate crimeWillful Promotion of Hatred Toward an Identifiable Group, under the Criminal Code of Canada.

He was arrested Monday, February 15, and appeared in court to face the charges Tuesday and Wednesday last week.

In June 2019, Carlyle RCMP received the report from the Canadian Anti-Hate Network regarding an alleged Anti-Semitic video on YouTube called Beware the Parasitic Tribe.

The video features 29-year-old Patron, who is the leader of the Canadian Nationalist Party, and ran for Parliament in Souris-Moose Mountain in 2019, finishing last.

All of the evidence gathered by police was reviewed and forwarded to the Saskatchewan Attorney General, which is a requirement for the charge of Willful Promotion of Hate, under Section 319 of the Criminal Code of Canada to be laid.

Police are still investigating each of these reports.

Videos posted by Patron on his Canadian Nationalist Party website include himself giving a Nazi salute at the Redvers cenotaph.

On February 15, 2021, Carlyle RCMP were given direction from the Attorney General of Saskatchewan to arrest and charge Travis Patron under Sec. 319(2) of the Criminal Code of Canada for Willfully Promoting Hatred to an Identifiable Group.

Patron made his first court appearance on Tuesday in Weyburn Provincial Court via telephone.

He appeared in Regina Provincial Court on Wednesday, also via telephone.

He was held in custody by Carlyle RCMP until his court date Wednesday.

His next court appearance on the promotion of hatred will be on April 14 in Carlyle.

I am respectfully asking if charges have been formally laid and if so under what authority. Your administration does not have the authority to proceed on these matters, Patron told the court.

Aside from the hate crime charge, Patron is also facing charges of Assault Causing Bodily Harm and Aggravated Assault over an incident in Regina that sent two women to hospital.

On November 2, 2019, Patron was stopped around 3 am by police after an alleged assault against two women who refused his offer of a ride home from a bar. Patron refused to stop for the police that night.

After police determined his identity and arranged an interview, he was charged with aggravated assault, assault causing bodily harm and probation violations.

His next appearance for those charges will be on March 11 at 2 pm in Regina.

He will appear in Provincial Court in Carlyle on Wednesday, April 14 for his charge of willfully promoting hatred of an identifiable group.

In a separate legal matter, on Feb. 9, Patron lost an appeal against the City of Saskatoon. The Canadian Nationalist Party was ordered to pay the city $1,500.

I dont know why it took so long to charge him, Balgord said. It shouldnt have. Theres no new evidence here. We hear that the police are investigating all the other things he did subsequently, but this charge was laid on the basis of the video we originally complained about 601 days ago.

It shouldnt have taken that long. I have some understanding that the local RCMP probably havent dealt with this particular charge before but there is no reason for it to have taken 601 days.

I couldnt give you an exact number how many charges like that are laid, but itd be under a dozen, some years it might even be half a dozen. It really depends on the year, but it is extremely rare.

Police officers themselves sometimes dont understand the law, but the law is effective.

People have been charged before under this law and theyve appealed it saying its against their Charter Rights of free expression, all the way up to the Supreme Court. So this has been tested and tried. The Supreme Court found that was this an infringement on freedom of expression, yes. Was it justified under section one of the Charter, yes. So, they said that the law was Charter consistent and they said that, when it comes to free expression versus everybodys right to be free from discrimination, in balancing those Charter obligations, that the country has hate speech laws, and speech such as the kind that Travis is saying should be considered low value or low priority speech, and in the balancing of those things, should lose against peoples right to be free from discrimination, and so they held up the law as Charter consistent.

Theres actually great case law here, theres great precedents, this law has been tried and tested and endorsed by the Supreme Court. The problem is police just dont investigate or lay charges in a lot of cases. Its extremely rare, and usually only comes as a result of just overwhelming community pressure.

Its great that they investigated this case, but it takes a long time to go to trial. Meanwhile, Travis is still doing the same stuff. In this case, he only escalated, and thats why more complaints were filed by us and by other organizations because he actually went further than that.