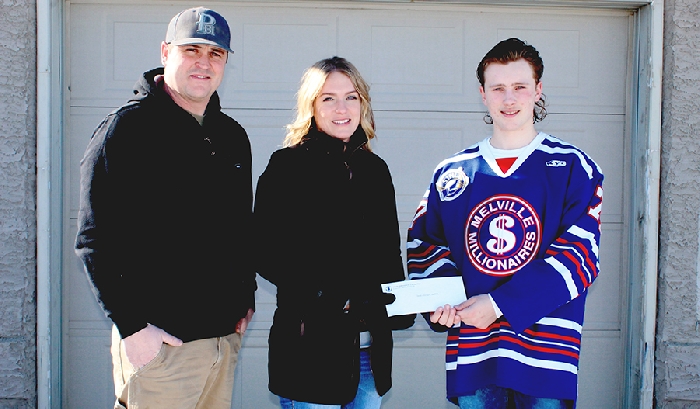 Kyle Bochek (right) of the SJHLs Melville Millionaires presents Michelle (centre) and Owen Wushke (left) a cheque for $14,300 after they won the teams Progressive 50/50 raffle.

Raffles to raise money for teams or programs have always been a staple of community fundraising. Most people happily buy a ticket to help show their support, but never actually anticipate winning the raffle.

That was the case for Michelle and Owen Wushke when they decided to purchase three tickets for $50 to help out the Melville Millionaires of the SJHL with their Progressive 50/50 raffle.

The Wushkes didnt expect to win the raffle, and when they did it was a pleasant surprise getting to take home $14,300 for supporting a friend.

It was just over $14,000 and we were in complete shock that we won, said Michelle Wushke. I bought some hockey tickets just to support a friend because her son is on the team and so we were quite shocked we won.

Wushke said she wanted to help out a local hockey team and that she didnt think too much about winning the money.

My husband has been in hockey almost his whole life and my kids too, she said, and as a parent you have these tickets to sell and you just reach out to your friends and family just hoping to sell them all, but you never think youll win. Debbie (Bochek) just reached out to me to ask if we wanted to support the team and so we just put our name down and next thing we know, we won.

Despite the Covid-19 pandemic stopping the SJHL season and stopping people from physically gathering to fundraise, Wushuke says it didnt slow peoples willingness to support the Millionaires.

I know after talking to Debbie they didnt anticipate it going as high as it did, but because people were phoning in and with E-transfers to buy the tickets it kind of just grew bigger than they expected and its great for the team, she said.