Patron being held in custody 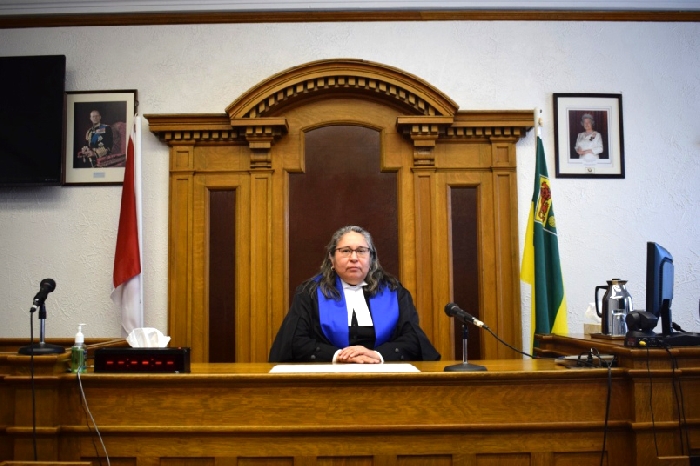 Travis Patron appeared before Judge Michelle Brass April 1 and had his show cause hearing set over to April 8.

Travis Patron of Redvers is being held in custody after show-cause hearing April 1 was set over to April 8.

Patron was arrested or the second time in 10 days on Sunday, March 28 after allegedly breaking in to the Redvers Legion Hall.

On March 19 police were called when Patron was causing a disturbance at the Legion Hall and refused to leave.

Then, on the night of Saturday, March 27, Patron broke into the Legion Hall and his image was allegedly captured on a security camera.

The next day, Sunday, March 28, police were called and Patron was arrested.

Travis Patron was arrested on March 28 for a break and enter to the Redvers Legion which occurred on March 27, said Sgt Geoff Stringfellow of the Carlyle RCMP.

He appeared for court on March 29 and was remanded in custody for a show cause hearing on April 1.

For this incident Patron was charged with Break and Enter and two counts of failing to comply with conditions of an undertaking.

Patron appeared in court in Estevan Thursday, April 1 for the show cause hearing.

Judge Michelle Brass set over the matter to April 8.

Patron is the leader of the far-right Canadian Nationalist Party, which is a registered political party in Canada.

Patron was earlier charged with mischief after police had to be called Friday, March 19 when he disrupted an event at the Redvers Legion Hall.

Patron is already facing other charges. He has been committed to stand trial for Assault Causing Bodily Harm and Aggravated Assault for an incident in Regina that sent two women to hospital, and he is facing a charge of Wilful Promotion of Hatred Against an Identifiable Group.

Patron is the leader of the Canadian Nationalist Party, a registered federal party. He ran in the 2019 federal election in Souris-Moose Mountain, finishing last with less than half of one per cent of the vote.

According to Carlyle RCMP, the mischief charge was laid after Patron was reported on the Legion Hall property in Redvers claiming he has ownership of the building.

Sgt Geoff Stringfellow of the Carlyle RCMP says police received the call on March 19 and responded.

Our members had responded to a complaint about Mr. Patron being unwanted at the Legion building in Redvers. He was claiming he had lawful authority to be there but it was determined he did not, said Stringfellow.

His refusal to leave led to him being arrested for mischief. He has been charged with mischief for obstructing the lawful enjoyment of the premises as well as breaching a previous court order, so an undertaking from a previous charge, Stringfellow explained.

Patron had previously sent a letter to the Town of Redvers saying he believes he has the right to claim the Legion building as his own.

On behalf of our federally-sanctioned political constituency, I am hereby serving notice of name regarding the property located at 40 Railway Ave, Redvers, Saskatchewan, S0C 2H0 (Parcel Number: 112534994). The property located at this address is henceforth known as the Ministry Of National Faithism and shall conduct itself under this name accordingly, Patron wrote to the town.

In acting as defender of the faith, and with a rightful claim to the property, we will henceforth refer to the aforementioned property as the Ministry Of National Faithism and respectfully ask others to do likewise.

The email from Patron to the town indicated Patron intends to remove signage from the building.

We have no intention of violating the trademark or naming rights of any other organization in using this property. Therefore, we will remove any previous name related to the property if no objection to this notice from Her Majesty The Queen is brought to our attention within a 14-day grace period, Patron wrote.

Due to Covid-19 restrictions, Redvers town council has been meeting at the Legion Hall.

Stringfellow told the World-Spectator that, if requested, the Carlyle RCMP would ensure a police presence for those that may feel unsafe or uncomfortable.

Any time there is a concern for public safety we will respond. Ive spoken with the mayor in regards to a meeting coming up and yes there will be a police presence available. Public safety is our number one priority, Stringfellow said.

Any time we have a request, especially from a council or a community group, well do our best to ensure we have somebody there.

Patron will appear in provincial court in Carlyle on April 28 on the mischief charge.

Patron had previously been charged with Assault Causing Bodily Harm and Aggravated Assault for an incident in Regina in late 2019.

He has been committed to stand trial in Regina Court of Queens Bench for the Assault Causing Bodily Harm and Aggravated Assault. There will be a pre-trial conference in Regina on April 23.

Police were dispatched at around 2:30 a.m. November 2 to the 1900 block of Victoria Avenue after receiving a report of an assault.

Police said two women, 33 and 43, had just been assaulted. They both had visible injuries from the incident, police said, and were taken to the hospital for treatment.

The women and Patron had allegedly been in conversation earlier in the evening. The women told police Patron offered them rides home, and when they declined, the alleged assault occurred, police said.

During the night of the incident, the Regina Police Service was able to spot the suspect, but he refused to be interviewed.

Upon further investigation, police were able to identify Patron and arranged for him to be interviewed.

In February, Patron was charged with Willful Promotion of Hatred Toward an Identifiable Group.

As required under the Criminal Code section in question, evidence gathered was forwarded to the Saskatchewan attorney general, following which a decision was made to lay the charge and Carlyle RCMP were directed to arrest and charge Patron with wilfully promoting hatred to an identifiable group, and Patron was initially held in custody on that charge.

Patron will appear in provincial court in Carlyle for the charge of Willful Promotion of Hatred Toward an Identifiable Group on April 14.

Patron was under several court-ordered conditions until he was taken into custody, and faces several charges of breaching those conditions.

He is under a curfew and must be in his home between 11 pm each night and 7 am the next morning.

He is prohibited from possessing or consuming alcohol, cannabis, or any drugs that have not been prescribed to him by a doctor.

A great horned owl was released Thursday in her home territory between Rocanville and Moosomin. The owl, affectionately called Beauty by the people...

Public health officials advise that three additional deaths in people with COVID-19 are being reported today:  a male in his 20s from the Northern h...

Vaccines Reported An additional 6,738 doses of COVID-19 vaccine have been given in Saskatchewan, bringing the total number of vaccines adminis...