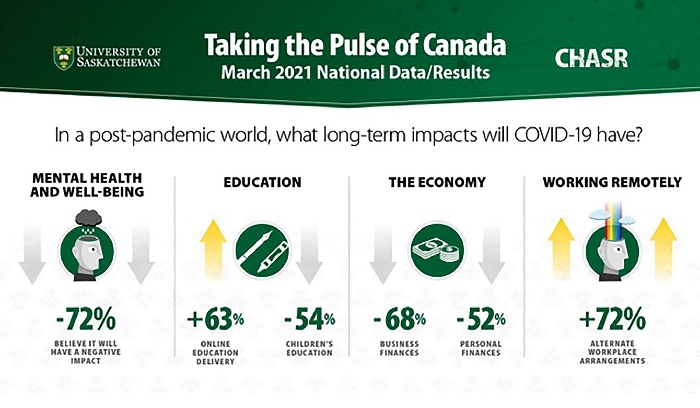 The survey saw many Canadians forecasting positive impacts of the pandemic in working remote, but negative impacts to mental health and well-being.

The University of Saskatchewans Canadian Hub for Applied and Social Research (CHASR) recently conducted a Canada-wide survey to see what impacts the COVID-19 pandemic has had on Canadians.

From March 1 to March 19, over 1,000 people were asked what long-term impacts they thought COVID-19 would have across a variety of different categories.

Positive long-term changes from COVID-19 included online shopping with 76 per cent viewing it as positive, as well as alternate workplace arrangements at 72 per cent, online education delivery at 63 per cent, and willingness to mask in public at 61 per cent.

We have a telephone survey facility here at the University of Saskatchewan and since the beginning of the pandemic, weve been doing a lot of public opinion-related research on the pandemic. Its also been more specific to here in Saskatchewan. A lot of public opinion work weve done has really been focused on the short-term or immediate impacts of the pandemic. For example, we asked people if theyre adhering to the Public Health Order or the guidelines, or if theyre wearing masks, or intend to get vaccinated. But were at the point now where a portion of the population is getting vaccinated and its growing every day, and were at the point where were seeing a potential light at the end of the tunnel and hopefully come summer or fall things can return to some quasi-normal state. So we thought itd be a great idea to start asking what people see what a post-pandemic Canada might look like.

So that was the idea behind this particular survey and the questions we were asking. It was really to get a sense of how Canadians are feeling about a post-pandemic Canada. So what we did is we presented them with a number of different areas and asked the individuals we surveyed via the telephone if they saw the pandemic having either a negative long-term impact or a positive long-term impact on Canada.

Disano says that CHASR frequently conducts surveys on behalf of the University of Saskatchewan as well as outside contracts, which include media outlets and government agencies.

He explains that Canadians saw quite a few positive outcomes from the COVID-19 pandemic.

So in terms of the results where Canadians indicated they saw a positive change, online shopping was the highest at 76 per cent. Seventy-six per cent of Canadians saw a shift to online shopping as a positive outcome post-pandemic. If youre the owner of a small business that maybe hasnt made a shift to an online marketplace, then it might be a negative, but three-quarters said that was positive.

Seventy-two per cent of those who were surveyed identified alternative workplace arrangements, for an example working from home, as a positive coming out of the pandemic.

Online education delivery, an example being the University of Saskatchewan transitioning a vast majority of their course offerings to an online format, 63 percent of those thought that to be a positive.

One area in particular that Disano noted as interesting was the number of individuals who saw wearing masks as a positive impact from COVID-19.

The next one is particularly interesting. We decided as part of the survey to also ask about willingness to mask in public, and of course, we know that masking in public has become quite a bit of a political hot potato in many juristictions, not just in Canada but in the United States and abroad. This one was a bit surprising. Sixty-one per cent of those surveyed actually saw a willingness to mask in public as a positive coming out of the pandemic.

We were asking this question because really wearing face masks prior to COVID-19 was a rarity in Canada. Its going to be interesting to see as we move into post-pandemic if people are going to continue wearing them during cold and flu season? I dont know. But these results suggest that perhaps there might be some openness to it. It doesnt mean its going to happen or itll be mandated, but theres some openness to it. I thought that was particularly interesting and not something I really expected.

Disano also noted that there were gender differences in some fields with more women than men forecasting positive impacts to personal relationships, domestic travel, and social gatherings.

He explains that the questions they asked are new and they hope to revisit the survey down the road.

I think it would all be dependant on how the pandemic goes and how vaccines are rolled out. I think myself included, were having these conversations about things like if well mask even after the pandemic. People are really now starting to think about and wondering about what a post-pandemic Canada is going to look like. I think there seems to be a consensus that its not going to be identical to what it was in January of 2020, but people are really wanting to see what it will look like, what they can do, and what they cant do. Theres not a lot of information out there yet, but I think as the vaccinations continue to drag on and the numbers continue to go up, I think theres going to be an increased focus on those in government who work in police to maybe provide more information in terms of what a post-pandemic Canada is going to look like.

Disano hopes that the results of the survey will help policymakers and government officials get a better idea of how Canadians view the outcome of the pandemic.

These surveys are important because they tell the government just where peoples minds are at.
We put this data out to share it back with Canadian residents. I do think this data is really important and that itll help policymakers to really understand how Canadians think a post-pandemic Canada will look like.