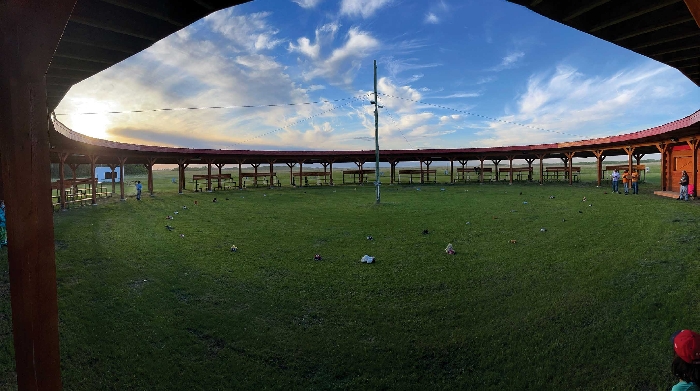 The Cowessess First Nation held a ceremony to honour the memory of the 215 Indigenous children whos remains were discover over Victoria Day long weekend in Kamloops, B.C.

Over the Victoria Day long weekend, the remains of 215 Indigenous youth were found in unmarked graves at the Kamloops Indian Residential School.

The discovery caused a national uproar across Canada as various groups have begun to pressure the federal government to investigate residential school sites across Canada.

Chief Cadmus Delorme of the Cowessess First Nation says that while he did not attend a residential school himself, he feels the impact this discovery has had on those in his community.

He says the discovery has turned attention to residential schools, including both the Round Lake school and the Marieval Roman Catholic Residential School, both located near the Cowessess First Nation.

As the elected Chief of the Cowessess First Nation, this impacts us all. I did not attend a residential school, Im the generation after. But being the Chief you take on the mental, emotional, physical, and spiritual impacts of the negative side. So the recent discovery makes us look here at home in our First Nation. We have to do this too. The fear is what we are going to find because in our stories we have stories very similar to what was experienced in Kamloops, said Delorme.

The Cowessess First Nation held a ceremony in memory of the 215 Indigenous youth who were found in Kamloops.

I took direction from our elders, I took direction from the ones who attended residential schools and we did have a gathering at our Powow grounds. We laid some shoes and teddy bears and candy down in memory of the spirits of the Kamloops residential school. We then offered tobacco to survivors to share their stories and some were emotional, some were angry, and some were just sharing their story. But it allowed us to sit there and understand that we have to address ours as well and find ways to heal and to speak the truth.

Delorme says the next steps will be to investigate the schools nearby to help bring closure to those who once attended and truth to those who did not.

We want to address the truth with doing this where the Marieval Roman Catholic Residential School once was and the gravesites that came with it. We want to address our truth and once we do we want to start moving to reconciliation for our healing and making sure that every spot is identified and marked. We might not know the names of whos there, but we want to acknowledge that somebody is there. We want to put up a monument for current and future generations to acknowledge and to pay their respects to.

Delorme concluded by saying that the truth about residential schools needs to be acknowledged before reconciliation can begin.

In our sports, our politics, our business, the truth has to prevail. Then we move to reconciliation. Indigenous people are a rightsholder in the country and not a shareholder, and indigenous people from Cowessess want to grow with Canada, but we want to do it from our perspective. Not what Canada is offering us, but what we want to offer to Canada what we can be and what we know we can be, said Delorme.