Wyant happy to have RCMP on board with Clares Law

Law allows people to find out if intimate partners have been involved in violent or abusive behavior RCMP previously refused to participate, citing federal privacy legislation 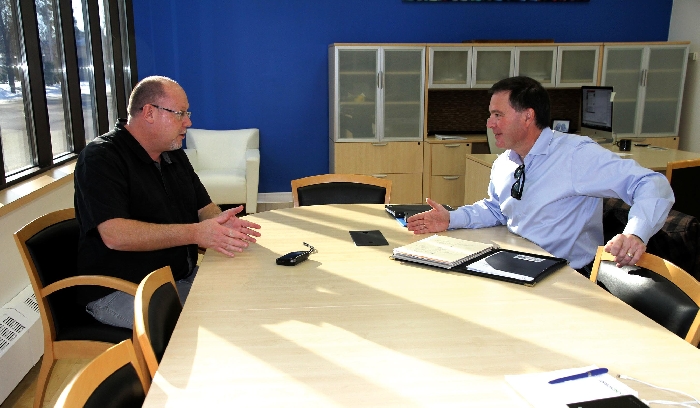 Saskatchewan Attorney General Gord Wyant at a previous interview at the World-Spectator office (pre-Covid, before the mask mandate).

Saskatchewan Attorney General Gord Wyant told the World-Spectator in an interview Thursday that hes happy to have the RCMP on board with Clares Law, provincial legislation allowing people to find out about violence in the past of an intimate partner.

Saskatchewan was the first jurisdiction in Canada to introduce this type of legislation and the RCMP initially would not co-operate with the law, citing federal privacy legislation.

The provincial government encouraged the RCMP to make the necessary amendments in order for the RCMP to participate in Clares Law in Saskatchewan.

What we did as a government is we were encouraging the federal Minister of Justice to get the RCMP to adopt the process.

The RCMP is responsible for a great deal of law enforcement in this province, especially in rural Saskatchewan. So prior to the RCMP adopting their protocol around Clares Law, certainly, there was a sense that perhaps some people wouldnt have access to the process.

That process was available through municipal police forces but the importance of the RCMPs participation is that people in rural Saskatchewan will now have direct access to the information through the process thats been developed, Wyant said.

We certainly encouraged the RCMP, and I know there was correspondence and communication with the Minister of Justice about how important this was to the people of rural Saskatchewan.

It was from the perspective that the RCMP detachment in a particular town would be the first line of communication for many people. While those individuals in rural Saskatchewan wouldnt have access through a municipal police force like Saskatoon or Regina, having the RCMP participate is important to people in rural Saskatchewan, for them to know they have the full protocol.

What it does is it allows individuals to get some intelligence on their partners or former partners to see whether or not there is a risk of falling into a situation where theyll be a subject of domestic violence. So it gives them an opportunity to get information, to seek out that information from the police, and now the RCMP, which were very happy about.

Wyant says that seeing other provinces pick up on Clares Law is encouraging and he hopes that more provinces follow suit.

Were very hopeful for it. I know that the former Attorney General Don Morgan had written a letter to all his counterparts across the country, encouraging them to have a look at what were doing here in Saskatchewan. Of course, when we look at issues of domestic violence and other issues that are facing the people of the province, we often look to other provinces to see what theyre doing and other provinces look to us to see what were doing.

I intend to write to my colleagues across the country to emphasize again the work thats being done in Saskatchewan and now Alberta on this very important issue. Certainly, the more opportunities that are given to people to seek the information that they need so they dont get involved or become a victim of domestic violence is important. So Im going to encourage my colleagues across the country to look at this, were very pleased that Alberta has done this as well as Newfoundland and Labrador, which has also moved forward with that. I will encourage my counterpartseach Attorney General across the country to have a look at that to encourage them to see what were doing and the successes weve had in this province and this area.

Small number of formal applications so far
So far, Wyant says Clares Law has been utilized for a small handful of people. But even with the low uptake, Wyant says it provides a service to help individuals get the support they need.

Former Justice Minister and Attorney General Don Morgan said when Clares Law was introduced that if it helped a single person, he would consider it a success.

Wyant explains that the low number of cases under the law so far is attributed to issues being resolved before the formal application is complete.

Weve only had 10 applications if I recall that have gone through the formal process. One of the most important things about Clares Law is that there are a number of people contacting the police services with inquiries about the law, and part of this is probably people not going through the full process.

There are people who have concerns and can be connected to services prior to a formal application being made. The whole purpose of the law is to make sure that we can connect people with the supports they need, whether they are victims of violence, whether they believe that there is a potential for interpersonal violence or whether there are other issues going on. Thats all part of this process.