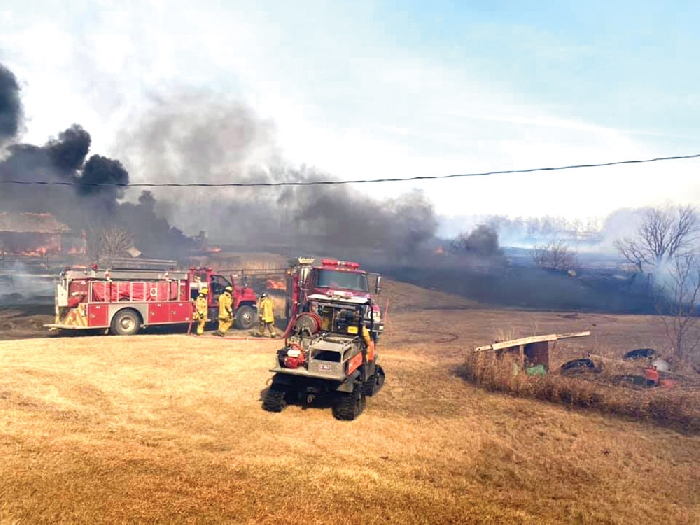 Firefighters from Virden, Elkhorn and McAuley worked together to fight a grass fire last week and were able to save a house, however several buildings were lost in the blaze.

Dry conditions and high winds have led to many municipalities across Saskatchewan and Manitoba implementing fire bans.

The RM of Moosomin and the RM of Martin implemented full fire bans. Under the full fire ban, there is to be no open burning, fireworks, burning barrels, fire pits, or campfires. Use of CSA and UL-approved appliances such as liquid fuel barbecues, camp stoves, and incinerators is still permitted.

The RM of Moosomin warns that the fine for contravening the bylaw is $1,000 for the first offence, $2,000 for the second offence, and $3,000 for the third and any subsequent offence.

The RM Maryfield implemented a fire ban, which under the RM of Maryfield bylaw bans fires in burning barrels incinerators, fire pits, or campfires, and also bans fireworks. The use of CSA and UL-approved appliances such as liquid fuel barbecues, camp stoves, and flare stacks is still permitted.

The Town of Moosomin total fire ban includes any fire of any type within the town, including in wood burning fire pits, and also bans fireworks. Covered charcoal, natural gas or propane barbecues and camp stoves are permitted.

The Town of Redvers implemented a total fire ban, this includes fire of any type within the town, including but not limited to open burning, wood burning fire pits, and fireworks. Covered charcoal, natural gas, and propane barbecues, however, are still permitted.

The Town of Redvers warns residents that if required, the cost of fire prevention, suppression, and emergency response services will be charged to the individual who received the services.

The RM of Wallace-Woodworth implemented a Level 1 fire ban last week after a large wildfire in the RM.

The RM of Wallace-Woodworth fire ban prohibits all open burning, bonfires, yard waste burning, and restricted yard waste burning. According to the RM bylaw, Individuals who contravene this Burning Ban are subject to a penalty of $1,000.00 and are also responsible for all cost incurred by the Municipality in fire protection and suppression operations should the fire department be called to extinguish a fire.

The RM of Silverwood advisory notes that open burning in the municipality is not recommended due to dry conditions. It is also recommended that Agriculture and Industrial operations have water tanks filled and at their disposal at all times, and ratepayers are advised to use extreme caution when burning and are encouraged to have plans to extinguish fires to prevent wildfires.

The RM of Ellice-Archie has implemented a fire restriction, which requires anyone planning a controlled burn to report the burn to the RM office or directly to the Fire Chief.

Dry conditions and high winds have led to several wildfires in Saskatchewan and Manitoba recently.