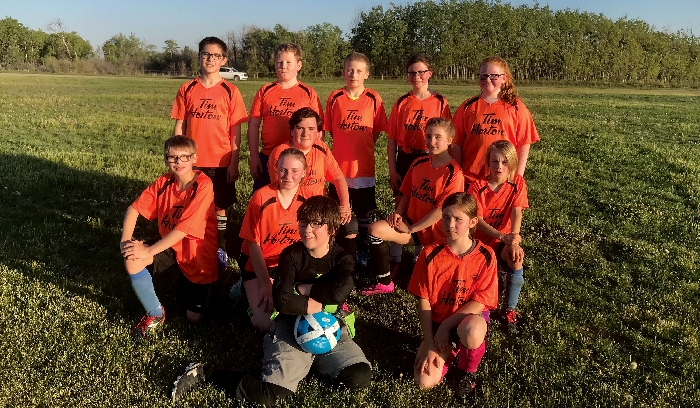 Moosomin United Soccer is preparing for a return to play in May, however there will be restrictions due to the ongoing Public Health Order.

Moosomin United Soccer is making preparations to begin playing soccer in May.

But this year due to COVID-19 restrictions there will be limitations.

Club President Tegan Matichuk says that the plan to start soccer during the start of May with some details still being worked out.

Our projected start date is the week of the 4th of May. We dont have dates set up for our practice schedules yet. Were hoping to actually work around the minor ball schedule because we know were not playing games out of town, we can kind of pick and choose when our practices are going to be. And if it gets more kids playing both, all the better, said Matichuk.

She explains that under the current COVID-19 restrictions and guidelines, which are prone to change with rising variant cases, Moosomin United Soccer has to limit the number of players at practice.

Right now were at whats called Phase Two, and Phase Two means that we can have practice with eight players and a coach, masked, on the field and outside with social distancing as much as possible with hand sanitization before entering and leaving our practice grounds.

Matichuk explains that a proposal for potential return-to-play guidelines was presented to the Canadian Soccer Association.

Around three months ago there was a small committee of volunteers that put together a proposal that we had to submit to the Canadian Soccer Association and it was approved at a national level and then it was agreed for provincial soccer. Weve done our due diligence in meeting the health and safety standards, the protocols, and if all we get to do is practice this year its still better than the kids just sitting on their devices doing other things.

Once the weather is nice we hope to get kids out and about, we know how important that is for both their physical health and their mental health to get out and be with people.

Matichuk notes that because the current restrictions limit the number of players to eight, team sizes will have to be cut down this year.

Typically the youth soccer league that we play in, teams vary in size from 10 to 14 kids. Anything bigger than 14 wed split into two separate teams, for U-5, U-7, U-9, but U-11 the teams get a little bit bigger because they play more players on the field and their field is bigger. Team size for U-11 would be closer to 18 or 20. Our oldest age category is the U-18s who play with 18 players.

Our hope is that we get to move to what is called Phase Three, which still doesnt allow for inter-town play, but we can still play within Moosomin. Were setting it up so each age category that were practicing with has at least two teams to play against in Phase Three should we get to that point before we start, said Matichuk.

She says that Moosomin United Soccer has already merged the senior teams in order to have two proper teams to play against one another in hope of moving to Phase Three.

We have had to combine our U-13, U-15 and U-18 in order to get two full teams. It isnt necessarily a big deal because U-15 and U-18 if wed have had a high school soccer team, would have played together anyways. But there wont be any play with teams from other towns, and any play that we do have would be all within Moosomin.

The one really nice thing about soccer is its not like a lot of other sports where you require specific roles. if we have 10 kids show up, we play five-on-five, if we have 12 kids, then we play six-on-six. With soccer, you can make do with whatever shows up. You can play half-field or you can play full-field. The overall point is that we want to make sure that kids get as much activity as they can in an organized way with some mentor coaches and their friends.

Because of emerging COVID-19 restrictions and Saskatchewan schools moving to remote learning, Matichuk says there was no soccer in Moosomin for the 2020 season. But thanks to grants and the naturally low cost of playing soccer, Matichuk says they were not impacted financially.

One of the great things about soccer is that you need a wide-open space and you need some kids to play in it. One soccer ball can cover a lot of people.

Weve been very lucky though, Mike Schwean does grant finding for us and the Saskatchewan Soccer Association has this thing called a MAP grant and facilities grant that we actually got some funding for to upgrade our field at Bradley Park. So it got seeded and watered all through the summer even though nobody was playing on it. But now its looking really good for us to use this spring.

Tim Hortons is also a really big sponsor for us as well. They provide us jerseys for our U-5s, U-7s, and U-9s and sometimes they supply us with other things too. In past years there have been soccer balls and soccer socks. The Elks chapter here in Moosomin ran the Chase the Ace a few years ago and provided us with some funding and some soccer balls that they donated as well.

Weve been very lucky to get this much community support and its a program we can run relatively cheaply.

While registration for Moosomin United Soccer closed last week, Matichuk says the organization is still looking for coaches and is offering to train them. Those interested can email tegan.matichuk@gmail.com.