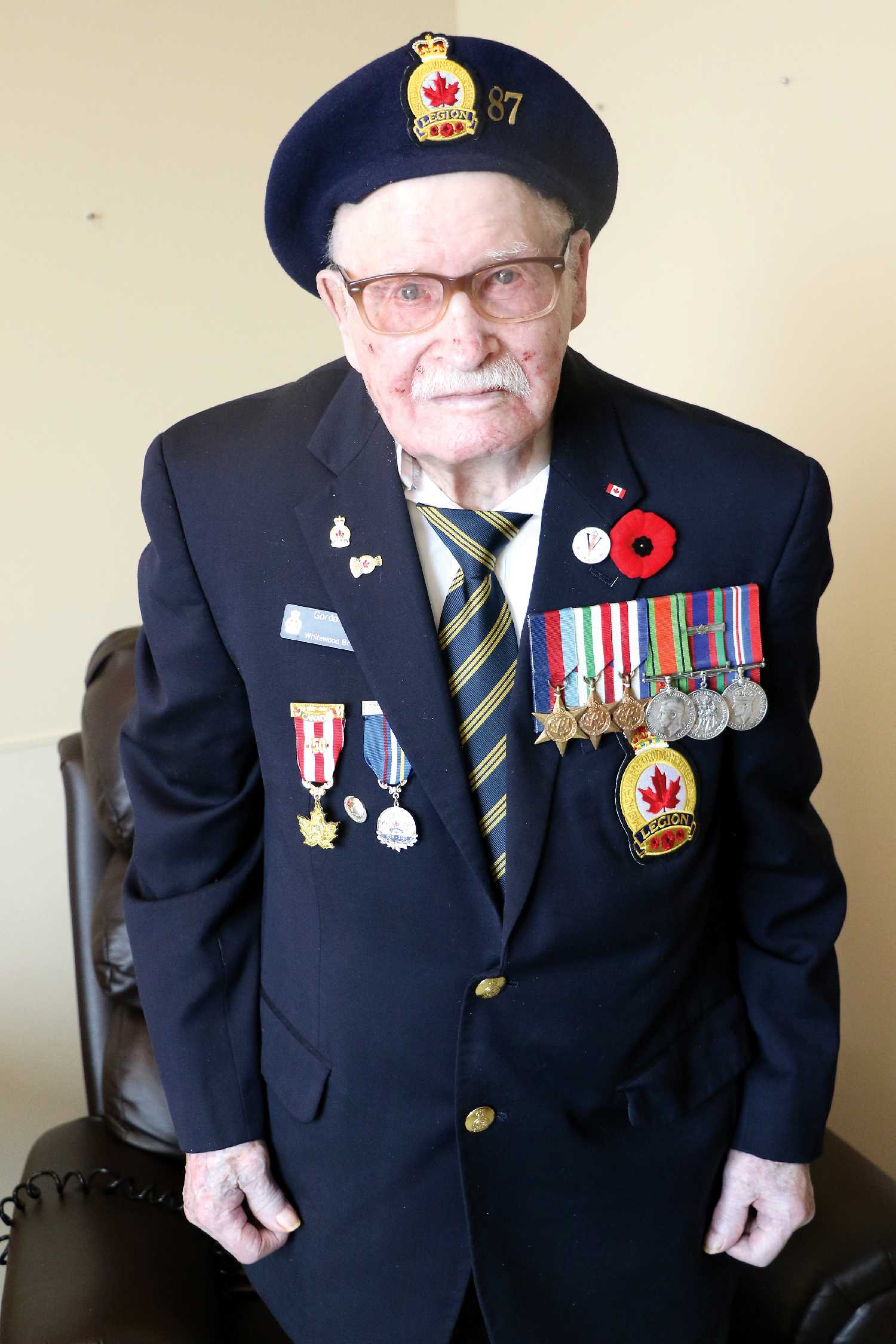 Second World War veteran Gordon Jones is one of the few veterans from a time of war, who is still here with us today and is able to share his experience from the past in honor of the sacrifices veterans have made.

100 year old veteran Gordon Jones, is one of the few veterans from the Second World War that is still present with us today.

Theres not many left of us now compared to what it used to be. I made a lot of real good buddies during that time, veteran Jones says.

You cant really describe it. You have to be really in it to understand the affects and stuff it has on you. It was certainly an experience.

He joined the army when he was 20 years old, along with two other men from the Wapella area.

I joined up right here in Moosomin on the fifth of June in 1942, I was still 20 years old. For a young country boy, I never been further than Moosomin so it was quite an experience.

Jones is originally from the community of Wapella and belongs to the Whitewood Legion. Jones now lives in the Southeast Integrated Centre (SEICC) in Moosomin.

During the Second World War, veteran Jones faced many battles. He was a machine gunner, operating a Bren machine gun.

Im proud that I did my duty, a lot of people wanted to stay in Canada. Im proud that I joined the military and did my part. I couldnt sit back and watch my buddies go and not do my duty, veteran Jones says.

He says at the time there were a lot of young men who joined the military and they should be proud for serving their country.

A lot of young men at that time left Canada to go defend. If a person felt like there was not much for them in the area, then they would join the army. As a farm boy who was never away from the Prairies it was exciting but you never really know what its like away from home until you get into it.

After returning to Canada, veteran Jones says it took a while to adjust to civilian life.

It took quite a while for me to get back to civil life again. During the battle you get split up with friends. I dont know of anyone now who is still around, the fighters that I know have passed on, he says.

I made a lot of friendships during that time. If you made a friend in the army that was your friend for life. That was a hidden treasure, it wasnt all bad.

Many of the medals Jones proudly wears on his chest represent the different campaigns he was part of, which took him through several countries.

We landed in England, and then we were in Italy for six months, Jones says. We went over to France, and from there I went to Germany. I was in Germany for the last three months as part of the occupation force. You dont realize until you get into it what its all about. In Germany there was some night warfare, and at one point I couldnt get back to my unit.

It was a little difficult getting back to civilian life. The war affected people differently, there were some guys that were happy-go-lucky and some went the other way, he says.

Theres not many of us left compared to what there was at the time. You cant really describe it. Youre just a cog in a wheel. I did have a lot of trouble after the war, I could barely sleep. But as time went by things seemed to change. Ive had a good life.

He said serving as a soldier was a big part of his life, but it isnt something he thinks back on every day.

I dont even think about the war anymore, its all in the past. Im just proud that I did my part, I served my country, I did what I could.

This Remembrance Day, with cold temperatures and high winds, Gordon Jones attended the Whitewood Remembrance Day Service, standing for the entire service through the bitter cold.