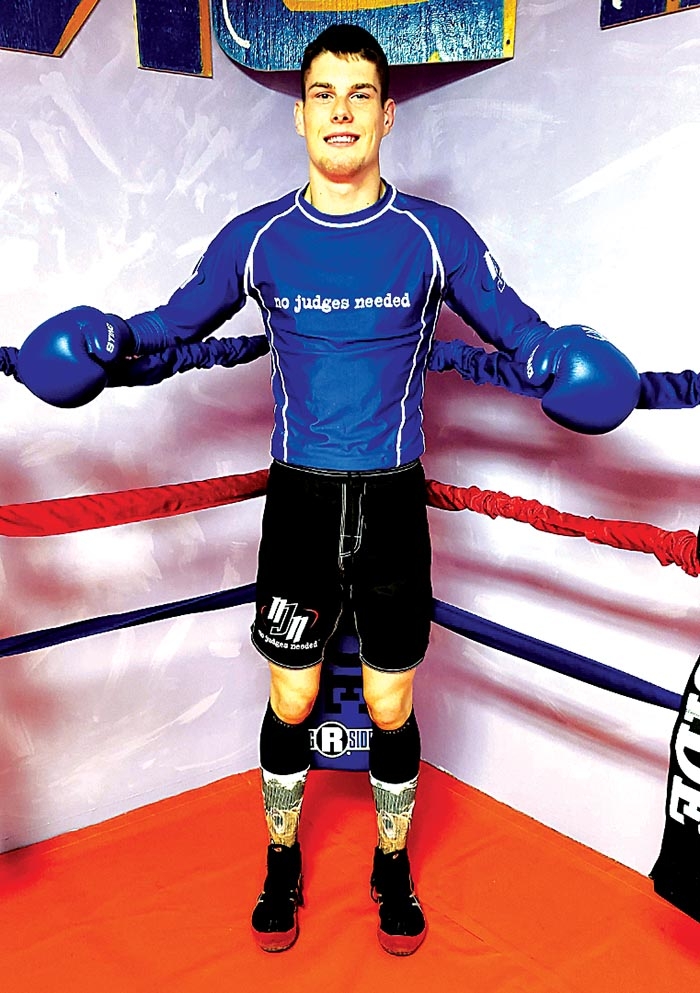 Zach Gehl in the boxing ring at Yorkton Martial Arts Training Center just before the 19 year old took on 150 sparring rounds to break the world record.

When a global pandemic closes down the entire world and postpones or cancels events, what is a young up-and -coming MMA fighter to do to stay fit and sharp?

In the case of 19-year-old Zach Gehl from Esterhazey, you train up to break the world record for most rounds sparred in one go on August 29. If you are the kind of person that Gehl is, you also do it as a charity event to help out Yorkton Martial Arts Training Center, the gym that supported you, and for kids who might want to take up fighting.

His high level competing has taken him all over north America including Las Vegas, Reno, Chicago and as far south as New Orleans. Gehl was particularly fond of fighting in Las Vegas.

There is always big fights going on there so it was interesting competing in the same place where so many large events have taken place, said Gehl.

At age 13, Gehl fell victim to something too many kids have to deal with  bullying. However, he decided to take action.

I started because I was getting bullied so I wanted to build my self-confidence and, if it ever came to having to defend myself, Id rather know how than not know how to, said Gehl.

He felt at home in the world of fighting, but that did not make the training any easier.

I was quite bad at it for the first year at least. I didnt win anything in the first year (I competed). It was getting through, not being co-ordinated and not being good that was the hardest thing, said Gehl.

World Record
The idea to go for the world record was a combination of a few factors, all brought on by the COVID-19 pandemic.

Before COVID-19, I would compete once every two months at minimum, but mostly once a month. When COVID-19 started, there was no competing of any kind obviously and even training was shut down. I had to have some kind of goal to keep that competitive spirit going, said Gehl.

The idea was to keep training interesting and attempt something that would push him.

So, I started to research world records because I thought that would be cool, then I saw the sparring one.

Like Lewis, Gehl would take on this Herculean task for charity.

It worked out that I could support my gym that I have been going to since I was 13 and the money I donate to the gym will be going to classes for kids that would otherwise not be able to take martial arts. So it was kind of a win, win, win, said Gehl.

To break the record Gehl would have to spar for 144, three minute rounds and only take one minute breaks between each round. However Gehl felt he wanted to go for 150 rounds.

Two of the people Gehl sparred against were his own father and mother.

His father came in at round 143 when Gehl tied the record and he sparred his mother in the round 144 the round that officially broke the world record.

It was good. Most of the time we dont spar each other but it was kind of interesting. They supported me so much through all of my competing so it was nice that they got those rounds, said Gehl.

Round 100 and beyond
Any endurance athlete will tell you that there comes a point where the body shuts down and all that remains is mental endurance.

At about round 100, I had nothing left physically so it was all mental from that point on, said Gehl.

In a standard kick boxing fight, on the level that Gehl competes, there are three rounds of three minutes each, so training for the 150 rounds was a bit different from what Gehl was used to.

I completely changed my training for this, obviously, because you cant prepare for three rounds the way you prepare for 150. I went all in on the cardio aspect. It is completely different from what my body was used to, said Gehl.

It is the mental game that can lead to breaking records.

I just thought that 150 was a nice round number, said Gehl.

It also meant that he for every round he sparred, he secured another kid a free martial arts lesson.

What I was really happy with is that I raised $2,950 and that translates into 155 classes for kids. That was definitely why I did this record. It wasnt just for me to say I got a world record. The gym I go to shut down because of COVID-19, so I thought this would be a great way to support them, and support kids, because I know how much it (martial arts) helped me, said Gehl.

When the last bell rang and the 150 rounds ended, so did the zen of it all.

I was in a zen state, but after that, you kind of realize how sore you are. You pop back into normal and you realize that everything is in immense pain, said Gehl.

The Future
With a world record and countless medals to his name, Gehl wants to get in the octagon for an MMA fight.

I want to definitely get an MMA fight, that is my next goal because it is what all this has been leading up to. COVID-19 shut all that down, so I am just keeping on training until I get an MMA fight. (Before COVID-19) I was supposed to have a kickboxing fight in Minnesota with a ranked guy. It is on hold, but that is still in the works, said Gehl.

Gehl has two tips for anyone who thinks about getting into martial arts training.

The first tip I would give is actually entering the door of the gym, because that can be intimidating. I know it was for me, but it is like a big hurdle you have to get over. When you see the people you realize it is not scary it is not some action movie where everyone is screaming at each other, or anything. It is a really nice atmosphere.

Tip two is sticking with it. If you stop you lose your progress, said Gehl.

Gratitude
A feat like this cant be done alone. Gehl is very grateful to everyone that was in his corner.

I would like to thank Yorkton Martial Arts Training Center for hosting the event, the 17 sparring partners that sparred me making this record possible and everyone who donated to give in need kids free kick boxing and jiu jujitsu classes, said Gehl.