Combined sales of $110 million per year 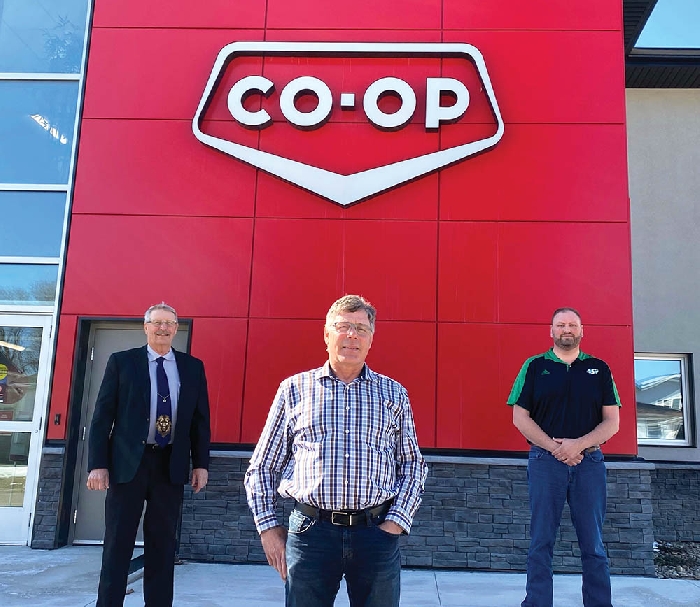 Co-ops were built on the concept of working together and this partnership is sure to make for a stronger, united Co-op committed to serving their communities better, the Co-ops said in a statement.

That founding principle remains at the heart of this partnership as both Co-ops share a vision to offer value, enhance growth, and maintain relevance for current and next generation members.

Lawrence Swanson, President of the Hometown Board, explains the strength the partnership will achieve saying, I see endless opportunities ahead for this new partnership.

Stability, opportunities for growth and efficiencies in all commodities that will make the member experience stronger and more rewarding across all communities we serve.

Rob Hill, President of the Borderland Board, said the decision to amalgamate will ensure a strong, vibrant and innovative Co-op exists in our rural communities. Both Co-ops complement each other very well.

By partnering together, the united Co-op will be more resilient to increasing competition and will have more resources and talent to pool together in order to innovate, according to a statement.

Darren Ottenbreit, Home and Agro Ops Director, explains, Having come from Hometown and now being part of the leadership team for both Co-ops, I believe there is significant value in the common goal we sharebuilding a strong and stable rural Co-op that can constantly evolve to meet the needs of our members in the communities we serve. Unifying our Co-ops will provide efficiencies in operations, more expertise to better develop our people and ultimately, a better shopping experience for members of both Co-ops which will earn local support and keep our locations viable for the long term.

Jason Schenn, CEO of Borderland and GM of Hometown, said the proposed merger will build on a current management agreement between the two Co-ops.

Borderland has always focused on being a strong and stable rural co-operative which has been extended to Hometown through the management agreement. The pandemic has proven that when communities support their local businesses, they can be sustainable for the long term. Our continuing mission is to strive to earn our members support so that rural communities we serve can continue to provide essential services long into the future. A shared future between Borderland and Hometown adds to that strength and creates more opportunities to contribute to what makes rural communities so special.

AGMs are planned for June 7 (Hometown) and June 8 (Borderland), 2021, which will include a member info session and vote on the proposed merger resolution. The meetings will begin at 6:30 pm.

As Covid restrictions may impact how this meeting is delivered, please watch for specific details on posters at all locations, follow our social media and watch for announcements in the World-Spectator and Herald-Sun in the weeks leading up to the meeting, said the statement from the Co-ops.

Hometown Co-op history
Broadview Co-op formed in 1910 as the Saskatchewan Purchasing Company to provide coal, oil, food, petroleum and general hardware to members. Broadview was incorporated as a standalone Co-op in 1977 following the dissolution of Westland Co-op. Over the next several years the co-op expanded into ag services, completed an amalgamation with Grenfell (2011) to become Hometown Co-op followed by Kipling (2013), Sintaluta (2014) and Wolseley (2015). Difficult financial circumstances resulted in the closure of Wolseley (2018), Sintaluta (2018) and Kipling Home Center (2019).

With 86 employees and 5,200 members, Hometown Co-op serves the communities of Kipling, Grenfell, Sintaluta and Broadview.

With 218 employees and 7,800 members, Borderland Co-op has locations in Moosomin, Rocanville, Maryfield and Whitewood.

Through Borderlands co-operative efforts in just the past 10 years alone, over $20 million has been invested into facilities in all communities Borderland serves, $8 million in cash returned to members and over $1,000,000 has been provided in support to various projects, community organizations and sponsorships.

About a Unified Borderland/Hometown Co-op
The over 13,000 members of the united Co-op, which will continue as Borderland Co-op, would be able to use one Co-op number in eight communities and at over 19 different locations (and growing).

At the time of amalgamation Borderland Co-op would have over 300 team members and leaders across six Cardlocks, five Gas Bar/C-Stores, one Car Wash, six Food Stores, five Home Centers, one Agro Center, three Liquor Stores and four Bulk Petroleum trucks that service a trading area of nearly 200 kilometers along the Trans-Canada Highway and approximately 50 kilometers to the north and south. Annual combined sales would be over $110 million per year.

Proposed board of directors of the unified Co-op


Special resolution members will vote on