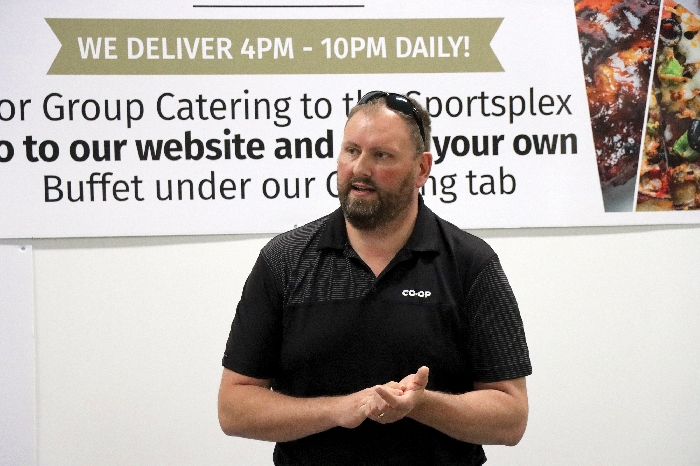 Jason Schenn shared details about the upcoming Borderland/Hometown Co-op merger with the Moosomin Chamber of Commerce.

During the Moosomin Chamber of Commerce meeting on Tuesday, the Chamber received an update from Borderland Co-op CEO Jason Schenn about the proposed merger between Hometown Co-op and Borderland Co-op.

Schenn explained that the merger was proposed after Borderland provided assistance to Hometown during its reconstructing over the past years.

The whole plan here is that Hometown has gone under significant reconstructing over the past two, three years. In the last year, weve been involved with them in a management setting where I am serving as their general manager and my leadership team is helping support them in a bunch of different ways, through finance, human resources, community relations, loss prevention, all kinds of different things, said Schenn.

Over the course of this year, its become pretty apparent that we would be better together and just get rid of the separate books, the separate functions, boards, that kind of thing. Become one organization.

Schenn notes that due to the current COVID-19 group size restrictions, only 30 individuals will be permitted to attend in person, the rest will be required to attend online.

Its going to be a hybrid meeting because the limit will still be at 30 for indoor gatherings. Well be allowing 30 in the meeting room and additional via online, through a meeting link, said Schenn.

Schenn says that services of the two Co-ops will not be affected by the merger.

Nothing really changes between the two organizations as the way theyre running today other than background financial stuff. All of our independent development plans as Borderland are going to continue forward as well as Hometowns. Weve been making sure those interlace nicely over the next while so that nobodys projects are interrupted or held back for any reason.

During Schenns presentation, a member of the Moosomin Chamber of Commerce asked if the merger would impact any of the Co-ops capital projects, noting both the liquor store that is to be constructed on the C-Store site on Highway 1 and the planned expansion for the food store.

Schenn says these projects will not be impacted.

The liquor project is going ahead. Things are actually mobilizing this week and we should be seeing things on site to get going here. It was a little bit held back with the pricing of the project last fall when we went to tender on it. We took another run on it this spring and we got some more favourable conditions so we were able to get it up and going, so that should be up and running by October.

The food expansion has layouts and plans designed for it. We have some land things were working through with the town right now in order to deal with community planning on a few different things. But were very close on that. As for an exact date and timeline, its tough to put those in place.

Together we represent about $110,000,000 in sales across the organization. so that gives us a lot of opportunities to finance and leverage a lot of community projects at once. Were also looking at what it can do in terms of jobs and adding some more higher-level jobs, like leadership jobs, many being based out of Moosomin and our admin. So hopefully well be able to add some higher-level HR leadership as well as development and training for our people.

Schenn told the chamber that he had not received many inquiries about the merger, comparing it to the merger of Whitewood Co-op in 2012 which resulted in no shortage of conversation, according to Schenn.

We put a lot of our information out there through social media and the paper and things like that and I sat near the phone waiting to receive calls and answer questions about it, but I hardly got any, Schenn said.