Peach orders for a local churchs annual peach fundraiser will be available until Wednesday, August 4.

Yvonne Down, Treasurer for Saskatchewan Gateway Anglican Parish, says that the annual peach fundraiser has seen rising success with each year it is held.

Our previous Minister, Reverend Trish, had come here from Regina and in Regina, the All Saints Anglican Church was doing peach fundraisers and so she wanted us to try it. We didnt do it the first year she suggested but the second year we did. In 2018 we had our first one and it was very successful and we sold 285 boxes of peaches. In 2019 we sold 430, then last year it was 620. Its grown each year and Reverent Trish was only here for the first year of it and then weve been on our own since, said Down.

The money just goes towards general operations. Between St. Albans in Moosomin, St. Thomas in Rocanville, St. Marks in Fleming, St. Peters in Spring Creek weve been doing this and everybody gets tickets to sell.

The funds raised play a critical role in continuing operations in the parish, according to Down. She says that through Covid when donations were lower, the success of the peach fundraiser helped keep the churchs doors open.

Its very important. We pay something called the Fair Share to the diocese and thats every month that we have to give. Through Covid we didnt have in-person services and we were doing it live through Zoom and so donations didnt come through as much last year, so it was really good having that fundraiser, she said.

This year the church is offering 20-pound boxes of peaches for $40.

It looks good. A lot of people who only got one box of peaches last year are getting two this year.
The fundraiser attracts buyers from across southeastern Saskatchewan and southwestern Manitoba.

Down says that she has had buyers from areas as far as Virden.

Down says the fundraiser is the biggest one of the year and helps supply the church with the necessary funds to continue operations. She says that the church holds other, smaller fundraisers throughout the year but relies heavily on the success of the peach fundraiser.

Our Parish Hall Guild does rummage sales and we do a pancake supper at Saint Albans. Sometimes we have our roast beef or roast pork supper.

The deadline for peach orders is Wednesday, August 4 and those interested in purchasing peaches can contact Yvonne Down at 306-646-7554.

Tickets can also be purchased at The World-Spectator between 8 am and 5 pm. 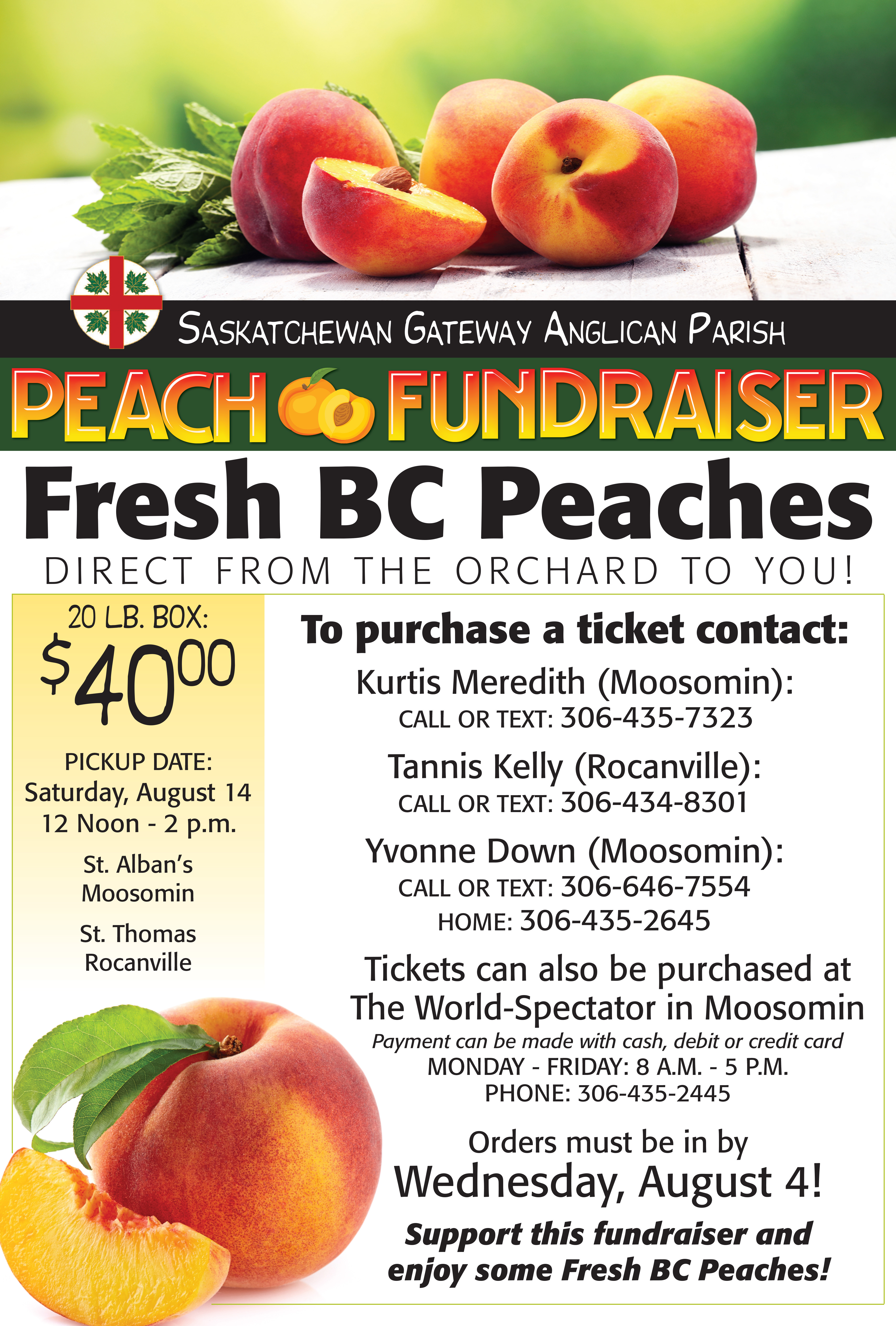