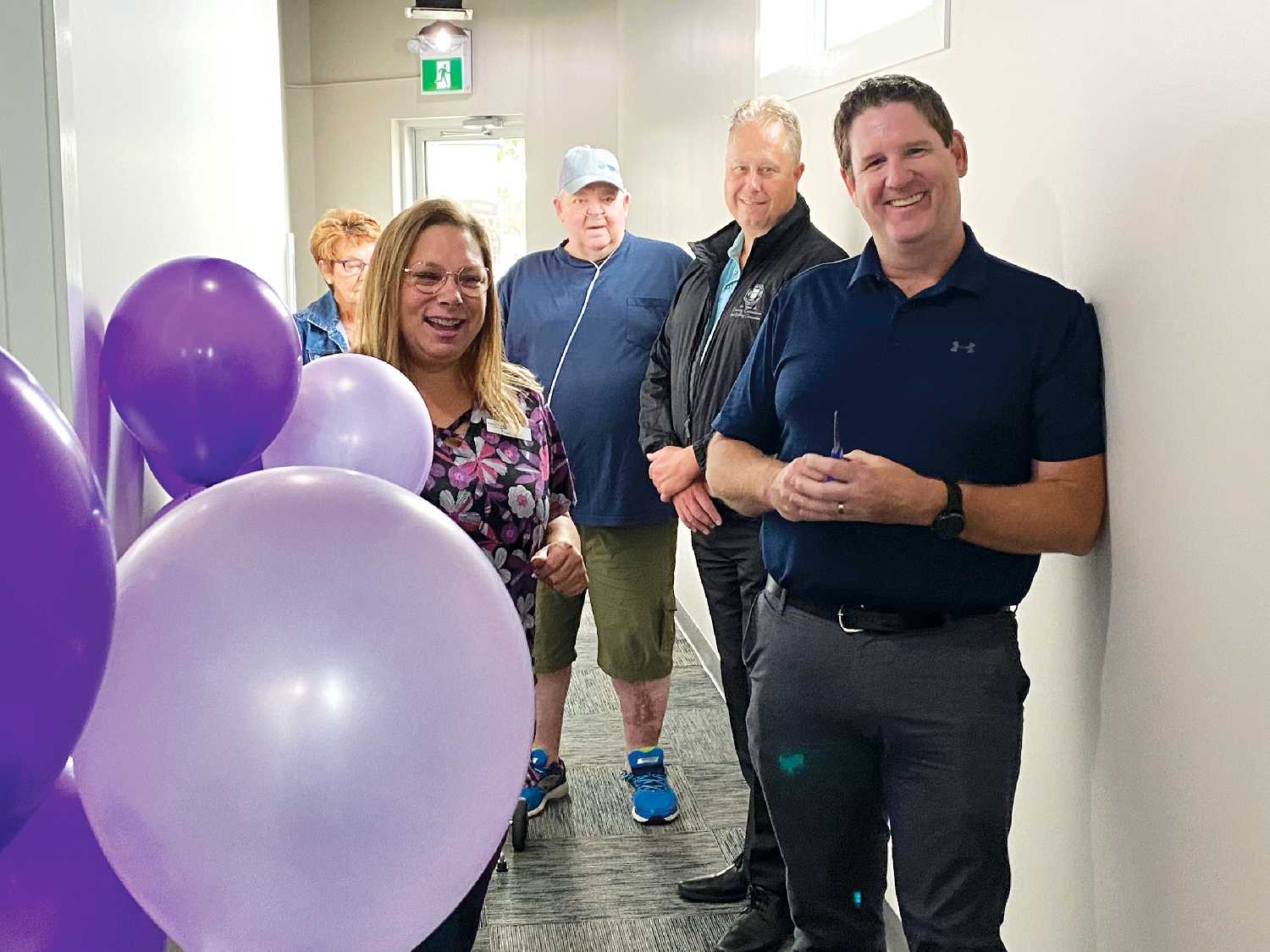 Tracey Alcorn, the owner of Parkland CPAP, and Murray Gray after the ribbon is cut.

The grand opening for Parkland CPAP Services in Moosomin was held on Wednesday. The new business is located in Broadway Commons on the corner of Broadway Avenue and Main Street. The business provides assessment services for sleep apnea, and sells CPAP machines and accessories, and sleep accessories. Parkland CPAP services started in Yorkton but decided to expand to Moosomin with a second location.

Were so excited to have everybody here, said Tracey Alcorn, the owner of Parkland CPAP Services. Dee (Mudkins) is the manager here in the office, so feel free to come down any time Tuesday or Friday and meet her and she can answer all of your needs.

On behalf of the Town of Moosomin and Economic Development, of which I am co-chair, we welcome you to Moosomin, said Moosomin town councillor Murray Gray before cutting the ribbon. Were happy to have some more services provided. We have a nice new building here, youve got some space in which we hope to get some more services like yourself in here, and we welcome you to the town and appreciate the fact that you came here to provide the services you provide.

Alcorn says the Moosomin location has been steady since opening.

Im pleased with how busy weve been so far. I think for just starting out you cant ask for much more and the word will spread, says Alcorn.

Alcorn says anyone whos already on a CPAP machine can come in to the business for accessories and service for the machines. However those who want to know if they have sleep apnea usually start with a doctors referral.

If you are already on CPAP you can come in any time you want because theres always re-supply that you need. But if you need to get tested, you require a doctors referral, she says.

We have lots of people come in because theyre just not sure what to do. So then we can explain the steps, and for some people if they really dont know how to have that conversation with the doctor, they can do the assessment first and then we send the letter to the doctor saying they were in. But usually it goes doctor, we get the referral, then we do the assessment, then we hook them up.

Its not even just about being tired, she says. If we think a person has sleep apnea theyre at a hugely increased risk for heart attack, stroke, diabetes, Alzheimers, all these other things. Its imperative you get tested and weve tested people that stop breathing 70-80 times an hour, every hour, all night long.

Alcorn says lots of times, the assessment comes after a complaint about a partner snoring really loudly.

Lots of times its snoring and its my spouse made me come here because if I keep snoring Im going to be kicked out of the bedroom. People come in usually because of snoring and complaints from a spouse or they come in saying Im tired my whole life and I just cant handle it anymore. Im at my wits end Im so tired. Im tired of being tired. And we get people saying I really hope I have it. Because then they have an answer and a way to treat it.

How common are sleep problems related to sleep apnea?

Were still going with 20 per cent. I do believe and even the respirologists believe its higher than that. Most people dont realize they have it. Its kind of like high blood pressure. You live with it for many years without realizing you have it and its only when it gets really bad that we go explore whats happening.

When I first got my training they actually taught us that women dont get sleep apnea. Now we know thats not true and actually women can have sleep apnea just as bad as men. They make a machine now specifically for women because women breathe differently than men. And post-menopausal women are four times as likely to get sleep apnea as the pre-menopausal counterparts. Sleep apnea is a process of aging. Children can have it but generally removing their tonsils takes care of that.

Years ago youd hear about people dying of heart attack or stroke in their bed, they die in their sleep. And on the death certificate it would say heart attack or stroke. Now youll see complications due to sleep apnea. Well see peoples heart rates at up around 228. Its that high because your bodys fighting that hard to breathe. Youre fighting a war.

Oxygen levels go dangerously low. Thats happening to people every night and youre going to wait five years to go to a sleep lab? We can catch that. We mark them urgent when we send them to the respirologist. They do them very quickly and then we call that patient and get them in because we have no wait list. We get them in and get them on the machine and get them going because thats not good.

Alcorn says CPAP machines use positive pressure to help people breath at night (CPAP stands for Continuous Positive Airway Pressure). She says unless you are already on oxygen, the machine simply uses the air in your room.

When weve got somebody on oxygen we would pipe the oxygen through his CPAP machine, but generally people on CPAP, if they dont need oxygen during the day or at night, its just room air. Its just that were keeping their airway open and keeping them breathing.

Alcorn says shes seen oxygen levels as low as 59 due to sleep apnea when 98 or 99 is normal.

She says often when people go on CPAP machines, they realize afterwards how tired they were and how much better they feel.

People say they cant concentrate, they have morning headaches, just a barrage of different symptoms. And some people dont realize how bad they feel. They dont believe us when we say that they have sleep apnea. We put them on a machine, they come back a week later and they say wow, I had no idea how tired I was. 